Captain Pedro Menendez de Aviles was a Spanish sailor, soldier, explorer, and conquistador sent by Philip II of Spain to remove the French from Florida. He set up camp in what is today the city of St. Augustine and launched his overland march to take Fort Caroline. He then marched south to find the shipwrecked French and put them to the sword.

Born on February 15, 1519, in Aviles, Spain, he was one of 20 brothers and sisters. Knowing his inheritance would be small, he decided to earn his livelihood as a seaman. At the age of 14, he ran away to sea, embarking on a ship that sailed from Santander to engage French pirates. Upon his return, he sold a portion of his inheritance and purchased a vessel of his own. One of his most celebrated feats occurred in 1549 when he encountered Jean Alphonse, the most feared of the pirates. After boarding the pirate’s ship, he fought a single-handed duel with Alphonse, mortally wounding him.

In 1565, King Philip II of Spain selected Menéndez to outfit and command a colonizing expedition to Florida. The mission’s first objective was to eradicate a French Huguenot settlement at Fort Caroline at the mouth of the St. Johns River. The second objective was to establish fortified settlements along the coastline to provide refuge from hurricanes and pirates for the treasure fleets returning to Spain using the Bahama Channel. 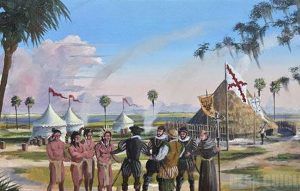 Menendez sailed from Spain in July 1565 with 11 ships and about 2,000 soldiers. They landed in Florida harbor on August 28, 1565, establishing a settlement they called St. Augustine, which is now the oldest continually-inhabited city in the United States.

Menendez marched north with 500 soldiers to attack the weakly guarded French colony of Fort Caroline on September 20, 1565. It is believed that the Spanish camped overnight nearby and attacked early. Forty or fifty French people escaped and sailed for France. Out of the remaining 200 people, only about 60 women and children were spared.

Menendez next marched south and found the shipwrecked Frenchmen, Ribault among them. They threw themselves on his mercy, but, to Menendez, they were heretics and enemies of his king. At a place later named Matanzas (Slaughter), he put to the sword about 350 men – all but those professing to be Catholics and a few musicians. France never again strongly challenged Spanish claims in North America.

Menendez’s daring exploits and naval prowess won him fame, fortune, and increasingly important missions to command. In 1554 Emperor Charles V named Menendez captain-general of the Fleet of the Indies, which offered great opportunities for personal gain by irregular methods. But, unlike many of his predecessors, Menéndez was a man of integrity and refused to take bribes. In 1555 he made the first of six transatlantic voyages to America.

In 1568 Menéndez was appointed the governor of Cuba. Drawing upon his experiences as captain-general of the Fleet of the Indies, he perfected the convoy-escort fleet, which helped protect the treasure fleets from the depredations of pirates. In 1572 Menéndez returned to Spain, where King Philip II appointed him captain-general of the Armada to invade England. Menendez’s unexpected death on September 17, 1574, may have altered the course of history. The “invincible” Armada, which sailed on its disastrous mission in 1588, was subsequently entrusted to the Duke of Medina-Sidonia, a courageous man but an inept seaman.