By Pat Edwards and Jo-Brew 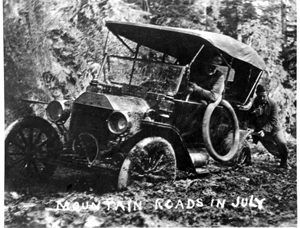 In the early part of the 20th century, travel through and between the Pacific Coast states of Washington, Oregon, and California was cumbersome. Towns and developing cities were connected haphazardly and, for the most part, the roads were still dirt trails wending through all types of terrain. In the fall and winter months, after the rains began, especially in the Pacific Northwest, these tracks became muddy quagmires that even horses, mules and wagons had trouble navigating. To the consternation of local residents of small towns, the newfangled machines called automobiles that Henry Ford and his colleagues began building were beginning to appear and catch on in popularity. Unfortunately, they were frequently jacked up on blocks and stored away during the wet autumns, winters, and springs when the roads became impassable.

As the love affair with the automobile began to take hold, more and more people began to petition for a main highway that would not only run through the whole State of Oregon from north to south but would also connect it to its neighbors in Washington and California. The same movement was happening in those states, too, and the dream to join the whole West Coast gained momentum.

In 1913, the first shovelful of dirt was turned by Oregon Governor Oswald West on the Siskiyou Pass to mark the beginning of the construction of that long-dreamed-of Pacific Highway through Oregon. At the time, the whole State of Oregon had only 25 miles of paved road. Even after the construction of the highway had begun, it was mainly dirt and gravel for quite some time. Federal money did not pour into the project until 1921. Until that time, it was up to the individual counties along the route to come up with the funding to build the roads through each of their areas. By its completion in 1926, however, it was adopted as U.S. Highway 99 and was declared the longest improved highway in the country by 1928. 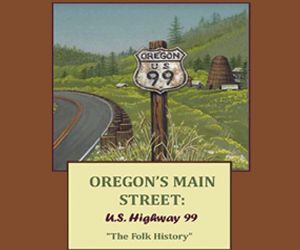 The route of the Pacific Highway, later known as U.S. Highway 99, had its beginnings long before the gold-rush and westward expansion of white settlers. The Native American tribes roamed throughout the area for centuries, establishing their own routes to winter and summer lodgings and areas where fish and game were plentiful and their favorite plants – camas roots, acorns, hazelnuts, fruits, and berries – could readily be found during their seasons of harvest. Most of those original routes followed animal trails. The migrating herds of deer and elk, especially, had for centuries found the most expedient way to traverse the mountains and valleys.

Once the French Canadian fur traders of the Hudson Bay Company, the gold miners and, eventually, the white settlers arrived, they also used many of the Indian trails to find the easiest ways to travel with their wagons and on horseback.

These early trails eventually became stagecoach roads when the increasing need to transport settlers, commodities, and mail from one locale to another became necessary.

As part of the Pacific Railway Act of 1862 that was later modified in 1866, the federal government began to offer land grants to the California and Oregon Railroad of California and a company to be designated by the Oregon Legislature to build a railroad line connecting California and Oregon. When completed in 1887, the railroad provided most shipping and passenger travel between Washington and California through Oregon’s interior, although steamships on the Willamette River were also used until U.S. Highway 99 was developed and improved.

With the advent of the automobile, more and more families began to avail themselves of the growing system of roads and highways. Bus lines – most notably the Pacific Greyhound Lines – began providing transportation for those who did not own their own automobiles. Soon, Greyhound and, to a lesser extent, Trailways Bus Lines, began providing parcel post service between towns along their routes, as well. 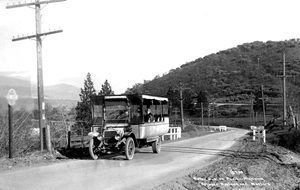 Motor Bus on Pacific Highway between Ashland and Medford, 1915. Photo courtesy of the Talent, OR Historical Society

The railroads began cutting down on their passenger service and automobile-related businesses began blossoming along U.S. Highway 99. Gas stations, auto courts/motels, and other businesses began appearing. Towns along the routes began growing and prospering. Many of the “Main Streets” were U.S. Highway 99. There were instances where the business districts of whole towns were changed to accommodate the tourist and commercial traffic generated by the highway.

During the mid-1920s and 1930s, when the airplane first became an obsession with the public; when distance and endurance records were constantly being reset and Charles Lindberg was the national hero, the Richfield Oil Company of California came up with an advertising scheme called the “Lane of Light.” It not only provided a valuable service to automobile drivers but to private pilots, as well. At that time, it was common practice for pilots of those early planes to follow highways and railroad lines, using them as their main means of navigation. The noses of the early planes were so long, the pilots could not see over them, so it was necessary to look down over the side door. Radar and guidance systems were a thing of the future, so they had to “fly by the seat of their pants.” It was during this time that U.S. Highway 99 became the main aviation flyway in Oregon.

The gas stations were spaced less than 100 miles apart along U.S. Highway 99, so automobile drivers would be approaching the next station when their fuel gauges were nearing empty. 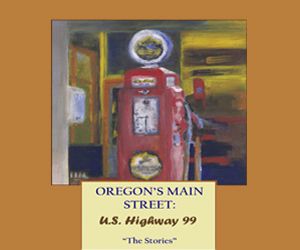 Near each of the buildings, a 125-foot steel tower was assembled. It had a beacon on top and neon letters placed on one side of the tower spelled “Richfield;” on the opposite side was the name of the nearest town where it was located. Some of the properties had airfields for small planes to land and hotels were planned for others… some had both. The company’s plan was to make these sites a small community in themselves. Richfield owned them, but generally, they did not operate them. In most cases, they were leased to local businessmen.

The Norman-style buildings themselves were comfortable and luxurious, incorporating “lounging rooms” for men in one wing and for women in another. They each had a salesroom and a canopy over the gas pumps. The grounds around them were landscaped to attract business.

Unfortunately, the Great Depression years sent that division of the Richfield Company into receivership and many of the stations were closed or put to other uses.