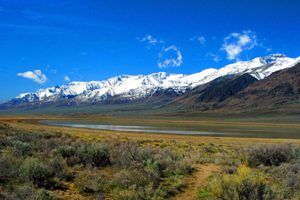 The old Riddle Brothers Ranch is located in Harney County in southeastern Oregon near Steens Mountain. Stretching some 50 miles long north to south, the mountain rises from alongside the Alvord Desert at an elevation of about 4,200 feet to a summit elevation of 9,733 feet, making it appear like it is a mountain range rather than a single mountain. Surrounded by wilderness the area was long inhabited by Native Americans for some 10,000 years prior to the arrival of European explorers in the early 19th century.

The first recorded history of the area began with exploration between 1826 and 1829 by fur traders of the Snake Country expeditions. It was called the “Snowy Mountains” by John Work, of Hudson’s Bay Company and one of the fur traders who were the first Europeans in the area. A few years later, the region was explored by Canadian fur trader, Peter Skene Ogden. In 1845, Steven Meeks led a wagon train through the area, mistaking the snow-covered Steens for the Cascade Mountains.

In 1852, William and Maximilla Riddle traveled the Oregon Trail and then the Applegate Trail to settle in the South Umpqua River country of Southern Oregon. This region was subsequently known as Riddle Valley and by 1884 known as Riddle, Oregon.

In 1860, the Army sent Major Enoch Steen to protect settlers and determine the feasibility of a road from southeastern Oregon to the Willamette Valley. After fighting and riving off members of the Paiute tribe of the mountain, his party named many prominent topographic features including Steens Mountain. In 1864, Captain George B. Curry led a unit of the 1st Oregon Cavalry through the area. The cavalrymen crossed a river on the west slope of Steens Mountain during a violent thunderstorm. Curry named the river Donder and Blitzen, which in German means thunder and lightning. Over time, it became known as the Donner und Blitzen River.

Cattle were driven into the area in 1872 and that same year, one of William Riddle’s sons, Tobias, married Sarah Smyth and moved to the Harney Basin with his in-laws. Initially, they settled at some warm springs near Hines and, after a tough winter, moved to more moderate climes near present-day Diamond, Oregon. Tobias and Sarah would have nine children.

Later, in the 1870s the Riddles sold their holdings to Peter French, the famous cattle baron, for $30,000 and they moved back to the Riddle Valley. Shortly thereafter, Sarah’s father and brother were killed by Indians during the Bannock War.

By the 1900s many cattle ranches had been established in valleys surrounding Steens Mountain. Three of these ranchers were the Riddle Brothers — Walter, Frederick, and Benjamin, who were the sons of Tobias and Sarah Smyth Riddle. The three bachelor brothers arrived around 1900, at which time there were some 100,000 cattle and sheep grazing the open range in valleys surrounding Steens Mountain. 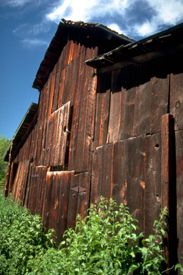 Settling along the Little Blitzen River, they secured homesites and began raising cattle. Over the next several years, the Riddles increased their land holdings on both sides of the river to 1,120 acres, eventually gaining control of all the water in the area. Without access to water, the nearby open rangeland was useless to other ranchers.

The three Riddle brothers lived on their ranch for 50 years and none of them ever married. In the late 1950s, they sold their ranch to a man named Rex Clemens, who continued to raise livestock on the property for nearly 30 years.

In 1986, the Bureau of Land Management purchased the property from Clemens in order to maintain the ranch for its historic value. In 1991, the Riddle Ranch was listed as a historic district on the National Register of Historic Places.

Today, the Riddle Brothers Ranch National Historic District is part of the historical context of pioneer settlement and the development of the livestock industry in the American West.

The structures remaining on this pioneer ranch and their setting conjure up images of simpler times… homemade housing, handcrafted furnishings, kerosene lights, candles, streams full of trout, and habitats conducive to both livestock production and the support of wildlife. The Riddle Brothers Ranch was part of Oregon’s last frontier — a settlement on semiarid lands that captured the interest of thousands of speculators and home-seekers in the northern Great Basin between 1900 and 1920.

The Bureau of Land Management has restored and stabilized the structures without changing the quality or historical representation of the buildings. The pioneer ranch complex is maintained as an open-air museum with original artifacts displayed where they were used. Many visitors enjoy discovering the historic structures scattered across the ranch meadows including the Frederick Riddle house, cookhouse, barn, root cellar, and blacksmith shop/tack room; and the Benjamin Riddle house, barn, bathhouse, root cellar, and willow corral. Unfortunately, the Walter Riddle House was destroyed by wildfire in 1994, and all that remains today is the stone fireplace.

Fishing, hiking, horseback riding, exploring, or relaxing along the Little Blitzen River among shaded cottonwoods are some of the many activities awaiting you at Riddle Brothers Ranch. Visitors may hike the Cold Springs Road north of Riddle Brothers Ranch to access portions of the Steens Mountain Wilderness, or east cross-country to reach Little Blitzen Gorge. Camping is not permitted at the site and though there are a number of Native American archeological sites on the ranch property; these are not open to the public.

Access to Riddle Brothers Ranch is regulated by a locked gate during the summer season, which is usually mid-June through October. The gate is open to vehicular travel periodically throughout the week and as conditions allow. Travelers should call the Burns District office or check the sign on the access gate to find out when the road will be open. Access by foot, bicycle, or horseback is permitted anytime. The road into Riddle is rough, especially during wet conditions. High clearance, four-wheel-drive vehicles are recommended. 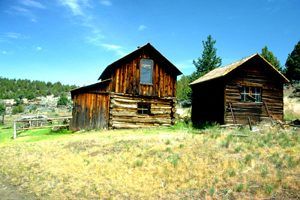 An Early Sketch of Oregon