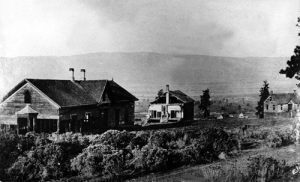 Fort Dalles was a United States Army outpost located on the Columbia River at the present site of The Dalles, Oregon.

The site where the fort would be established had long been a natural resting place for Native Americans, explorers, traders, and trappers. It got its name from early French traders for the word “dalles,” meaning flat rocks or flagstones, which evolved to mean a place where water, confined by rocks, forced its way through, forming falls and rapids. These early frontiersmen began to refer to the rapids as the “Grand Dalles.”

The first permanent structure to be built here was a Methodist Mission in 1838, founded by the Reverend Jason Lee. Called “Wascopam” after the resident Wasco Indian tribe, it was initially ministered by Lee’s nephew, Reverend Daniel Lee.

The missionaries at first preached from what came to be known as Pulpit Rock. The rock was near a spring, rich soil, and abundant timber. Adjacent to the rock the missionaries constructed several log buildings, including a dwelling house; three more structures, one used as a school; and outbuildings. Three years later a Catholic mission opened close by. The Methodist efforts at the Dalles failed because of the disinterest of the local Indians in Christianity; however, the mission served as a major stopping place at which wagon trains transferred to rafts to continue downriver. By the time many pioneers reached the mission, many were ill and half-starving as they faced the last great barrier of the Oregon Trail – the Cascade Mountains. Because of the steep cliffs that fell straight to the water’s edge, wagons either had to be abandoned or disassembled and loaded onto rafts and floated down to Fort Vancouver or to the Willamette Valley.

However, in 1845, the Barlow Road began to be built, and when it was completed the following year, it provided a choice of traveling overland into the valley. Most of the emigrants shifted to the new road and the Dalles declined in importance. In 1847, the Methodist Mission Society sold The Dalles Mission, its last active post in the Oregon country, to the American Board of Commissioners for Foreign Missions. Dr. Marcus Whitman, representing the board, placed his nephew, Perrin B. Whitman, in charge of The Dalles Mission, but he departed in December, the month after the Waiilatpu Massacre. That same month, volunteer troops arrived from Fort Vancouver and occupied the site.

Protecting the settlers from the troubles that led to the Cayuse War in 1848, the soldiers initially occupied the abandoned Methodist mission buildings before building a temporary stockade. The post was unofficially called Fort Lee at this time.

In 1850, two rifle companies from Fort Vancouver came to establish a supply depot known as Camp Drum, and the post became official. Later, it was renamed Fort Dalles. By 1852, a town had grown up around the post, which had become the headquarters for central and eastern Oregon, protecting the area settlers and the Oregon Trail from Indian attacks.

Resenting the invasion of settlers and miners into the region that followed the cession of a large part of their lands to the U.S. Government in 1855, the Yakama and allied tribes, spurred by the Yakama Chief Kamiakin, disavowed the treaties and retaliated. Colonel George Wright’s campaign, with a force of Infantry Regulars, brought the war to an end in 1856.

Some troops stayed at Fort Dalles in the Civil War era, but they marched out in August 1866. Others returned temporarily in December and remained until the next July, during which time General George Crook’s troops used the post for his campaign against the Snake Indians. When they left in July, the post was never occupied again.

Today, only one structure remains of the former post – the surgeons quarters erected in 1857. Since l905, the building has been owned by the Oregon Historical Society and today is operated by the Wasco County-Dalles City Museum Commission. The Fort Dalles Museum is located at 15th and Garrison Streets in The Dalles, Oregon. The parade ground is located on the site of a private school at 14th and Trevitt Streets.

Nothing remains of The Dalles Mission, but Pulpit Rock, from which the ministers first preached their sermons is located at 12th and Court Streets. A granite marker, in a triangular plot at 6th and Trevitt Streets, commemorates the mission. 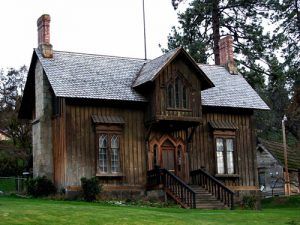 The great rapids which gave their name to the fort and the town, are now inundated by the backwaters of The Dalles Dam, which was built in 1957.