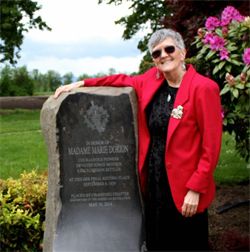 Author Lenora Good, May 10, 2014 at the dedication of a plaque commemorating Madame Dorion’s arrival in the Oregon Country.

[Editors Note: The following work is fact-based Historical Fiction, and about the book Madame Dorion – Her Journey to the Oregon Country, published by S&H Publishing  2014]

Imagine you live in the early 1800s. You are a young Ioway Indian woman married to Pierre Dorion, Jr., the metis (French Canadian father, Indian mother) with whom you have two young sons, Jean Baptiste aged four, and Paul, aged two and sickly. Now, imagine you live in St. Louis, Missouri, it is 1811 and your husband signed on as a hunter/guide/interpreter with Wilson Price Hunt and the Astorians. You and your family are about to leave for the Oregon Country, following the trail blazed by Lewis & Clark a few years earlier. You are the only woman with 62 men, two boys, and another child on the way.

You travel by boat, until you reach the villages of the Arikara (roughly present day Mobridge, South Dakota) and they tell Hunt the Sioux wait upriver to kill all of you and steal your supplies. Mr. Hunt buys packhorses plus enough for every two men to share a horse.

Imagine going overland, through unknown territory. You walk up the Big (now Grand) River, with no map, no road, no GPS. There are few trees to offer shade. After the river, you continue west, and south, through the Thin Buttes, into the barren hills where water and game are in short supply. The men suffer. Your boys suffer. You suffer. One man’s pet dog dies of thirst before you find the Powder River.

Imagine starving because there is no food to be found. The horses eat vegetation you cannot. Then finally reaching what we now call the Green River Valley in Wyoming and all the buffalo you can kill and eat and pack on your horses (6,000 pounds) to take with you as you go over the Teton Pass into Idaho and on to Henry’s Fort where there is some shelter from the October wind and bitter weather.

The men fall 15 suitable cottonwood trees, and soon have them dug out, and ready to load. Everyone is happy in the canoes–a faster method of travel than the horses, which are left with friendly Snake Indians to be retrieved in a few months on your return.

Hunt assures everyone you are only days, at the most weeks, from the mouth of the Columbia River and Fort Astor. You will discover Hunt is wrong.

Imagine your fear when the first four canoes go through the Cauldron Linn, and are lost, along with one life. It is then that you and the men cache the remaining supplies, except for what you can carry, and you begin to walk along the high, sheer rim of the Snake River. Close enough to see and smell the water, but no way to access it. With no horses, the hunters can’t get close enough to game to kill it. Snow often covers the ground, hiding anything that might be edible. The men begin to boil and eat their old moccasins; some are so thirsty they drink their urine. The men divide into smaller groups, each to make it’s own way. You and your family stay with Hunt, a man who didn’t want you, and doesn’t really like you. A businessman, not a Mountain Man, Hunt does not listen to his guides.

You are hungry, cold, and very, very pregnant.

By the 21st of December 1811, you have reached what is now known as Farewell Bend, Oregon — for the second time. The first time you passed it and tried to walk through Hells Canyon, but had to turn back. The only way to reach the Columbia River is to go over the Blue Mountains. The cold is bitter and the snow is deep. At roughly today’s Baker City OR, your baby is born on the 31st. It will live six days, and is never identified by name or sex but you call him Little Lark and bury him in an unmarked grave. On the seventh day you will be out of the mountains and with friendly Cayuse Indians. Do you blame Hunt and his obstinacy for the baby’s death?

Imagine being with other women, at least for a time. The Cayuse show you, and those men still with you, the Columbia River, and tell you how far you must go before you can once again ride in canoes. (Over 100 miles to Wishram, Washington).

After the slow and somnolent rivers of Missouri and the East, imagine what the swift and deep rivers of the Snake and Columbia must have looked like. Seeing the Great Falls of the Columbia (Celilo Falls, now flooded by The Dalles Dam), before getting canoes. Imagine the mighty Columbia, sometimes over a mile wide, and seeing forests of fir and oak. Imagine seeing seals for the first time play in the river. 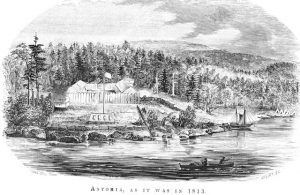 You reaching Fort Astoria on the 15th February 1812, exhausted, but alive, and wondering if you’ll ever be out of the constant mist and dry again.

Imagine, 18 months later joining John Reed’s party and returning, this time in the summer, up the Columbia, back across the Blue Mountains, and down to where the Boise River joins the Snake. You set up a main post near present day Parma, Idaho where you and the boys stay, while Pierre and some other men go up the Boise to a spot near present day Caldwell, Idaho to set up a secondary post. The local Indians, for the most part, are friendly. You cook, prepare the hides the men bring you, and run the post until the day of 14 January 1814 when your world is turned upside down and shaken inside out.

You are told hostiles are going to kill Pierre and the men. You quickly bundle the boys in warm clothing, and leave, on foot, in the snow, to warn them. Imagine you reach the cabin and through the open door see your husband on the floor, scalped, dead, and the Indians still inside. You hide the boys, sneak around back, steal two Indian ponies and run the rest off.

You return to the main post to tell Reed what happened, only to find everyone there is also dead, and the supplies and most of the food stolen. You find a couple of hides for blankets, some dried fish, and with the two horses, the boys, and your dull knife, you cross the Snake and climb back into the bitterly cold and snow covered Blue Mountains, where you hide for 50-some days until the weather warms, the snow begins to melt, and you and your starving boys come down out of the mountains. You are so weak you cannot walk, but crawl through the cold, wet mud.

Imagine surviving all this, and when the opportunity comes for you to return to your people, you decide to stay, thereby becoming the first pioneer woman to cross the country overland and settle in the Oregon Country. 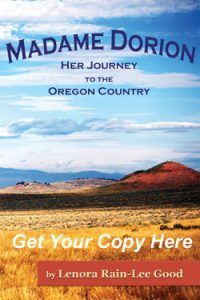 Lenora Rain-Lee Good is a native of the Pacific Northwest with a life-long fascination of history. Her grandfather took her, his only grandchild, everywhere, and if there were Historical Markers by the side of the road, he stopped and she received a history lesson. First from the marker, then from her grandfather who told her “the rest of the story.”

Born and raised in Portland OR, Lenora spent much of her time wandering Forest Park where she became Sacagawea, at the old Forestry Building (long since burned to the ground) built to commemorate the Lewis & Clark exposition, or at the Oregon Historical Society Museum located on the second floor of “Symphony Hall,” and crammed with artifacts and fascination. There were locks of Narcissa Whitman’s hair, an old covered wagon that came across the Oregon Trail, guns, arrowheads, moccasins, journals—all together, and all stimulation for her imagination. She does not remember a word about Marie Dorion, but then, Marie did not have the Public Relations team of Lewis & Clark. Wilson Price Hunt did not want her along on the trip, and never called her by name in his journals.

It was not until Lenora moved to Kennewick WA a few years ago that she read of Madame Dorion—from a roadside Historical Marker—and became fascinated by her.