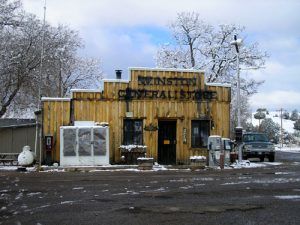 After gold was discovered at nearby Chloride and the town began to grow, some thought it too crowded or too rowdy and moved some 2 ½ miles to the northwest. The new community that got its start in 1881 was originally named Fairview.

Despite its close proximity to Chloride with its already established businesses, as well as the constant threat of Apache attacks, Fairview (Winston) grew quickly.  By June 1881, some 25 buildings were under construction, preparations for a well were being made, and the building of a new hotel was announced. Soon, the community also supported a smelter, a mercantile store, butcher shop, grocery store, a general store, a post office, two hotels, a drug store, a doctor, and a school.

A daily stage from Engle Station ran to the town. At its peak, Fairview (Winston) was said to have reached a population of about 500.

However, as the ore began to play out in nearby Chloride, the population began to decline and by 1889, Fairview reported only about 125 souls; worse by 1897, there were only 30 people. The community continued; however, becoming a small trade center for area ranchers, farmers and those few prospectors that continued to search the surrounding hills. Gradually, the population began to climb again and by 1905, it once again supported about 100 people.

Unlike many mining camps of the American West, Fairview never took on the violent and lawless reputation of many other camps. For the most part, its citizens were quiet and peaceful, its worst threat being that of the fierce Apache.  However, this reputation was marred in September 1884, when the peaceful city was rocked by a killing. It all began when an area rancher by the name of George Quarles wanted to borrow $500 from a merchant named Jacob Blum. Quarles was furious and the next day returned to Blum’s store with a six-gun, waving his gun around and making threats. Blum then retreated to get his own gun from the rear of the store and Quarles followed. George’s brother Henry was also in the store and was already armed. He challenged Quarles when he began to follow his brother. The furious rancher then turned on Henry firing his gun and missing. Henry returned fire, striking Quarles in the mouth and killing him instantly. The Coroner’s Jury ruled the killing justifiable self-defense.

During Fairview’s early days, a man named Frank H. Winston was one of the town’s most prominent citizens. Winston, a Wisconsin native, had originally settled in Grafton, another mining camp situated about ten miles northwest of Fairview. In 1886, he moved to Fairview, where he opened a General Store and became the town’s postmaster. By 1915, he was also the President of the Fairview Cattle Company and the proprietor of the Fairview Garage. He would also serve in the New Mexico legislature.

Winston was a very kind man and was known to extend credit to his customers, especially during difficult financial times, even when there was little chance of his ever being paid back. When he died on November 10, 1929, he was buried in the nearby Chloride Cemetery. A year later, Fairview was renamed Winston to honor the man. 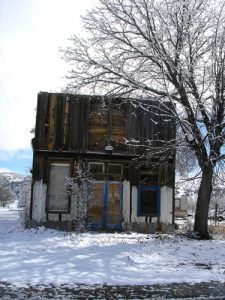 In the meantime, the town grew once again, especially during the Depression when destitute families would come to the area trying to make a meager living from mining activities. By 1940, the population was about 400, but six years later, had dropped to about 250. In the 1950’s the town suffered a flood that took many of its buildings and drove yet more people away. Throughout the years, people continued to move, leaving only about 50 people today.

Over the years, the mining district produced about $500,000 in silver and other ores. Mining continues in the area for Zeolite, a mineral utilized in agricultural products, water, and air filtration, and numerous other consumer products.

A number of old buildings continue to stand in Winston including the 1890 school, Frank Winston’s home and store, the old post office, and a chapel.

A community fiesta is held the first Saturday of June each year, which features a parade, barbecue, flea market, cow-chip poker and a dance.

To get to Winston from Truth or Consequences, travel north on I-25 to Exit 83, then left on NM-181, left again on NM-52 and follow signs to Winston. The ghost town of Chloride is just 2 ½ miles down the road. 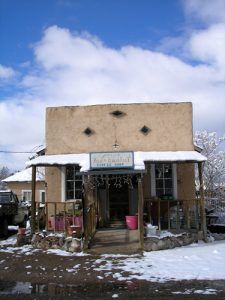