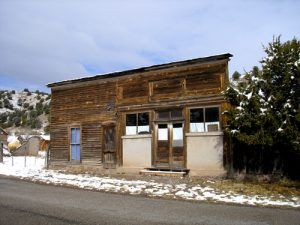 Though this false front building probably served various purposes in its lifetime, at one time, it also held the post office by Kathy Weiser-Alexander.

About 40 miles northwest of  Truth or Consequences, New Mexico, is the former mining boomtown of Chloride. When mule skinner, freighter, and veteran prospector Harry Pye discovered silver float in the Black Range Mountains in 1879, it would spawn one of New Mexico’s most significant mining rushes.

When Pye was delivering freight for the Army from Hillsboro to Camp Ojo Caliente, he discovered the silver in the canyon where Chloride would be born. When he had the sample assayed, he was thrilled to learn that it was high-grade “chloride of silver,” a term for which the town would later take its name. After completing his freight contract, he returned to the canyon with a few other prospectors and found the “Mother Lode,” called the “Pye Lode.”

Immediately a tent city was born, with the first log building completed in 1879. But for Harry Pye, he would not live to enjoy his newfound fortune. The area was rife with Apache, who were unhappy with prospectors and settlers invading their lands. A few months after Pye found the mother lode, he was confronted by the hostile Indians, and when his pistol jammed as he tried to fend them off, he was killed.

By the following year, a tent city filled the entire canyon. The camp boasted seven businesses, including the Pioneer Store, and over 20 substantial houses. The mining camp was first called Pyetown, then Bromide before it took on its permanent name of Chloride. 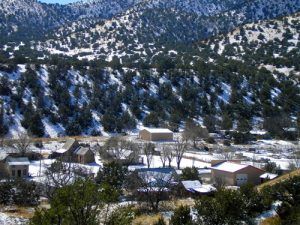 More prospectors came to the area in January 1881, setting up camp at the mouth of Chloride Gulch. These 18 prospectors, however, would soon also discover the wrath of the Apache when their camp was attacked. Two of the men were killed, and their horses and mules runoff. The remaining 16 men fled for their lives but would return a few months later in March, this time armed to the teeth.

Soon, the men gathered laid out an “official” town, and lots were distributed in a “lottery” by pulling tickets out of a hat. So starved were the men for the sight of women; they offered an enticement for a free lot to the first woman in the camp.

Though the camp was under constant threat of Indian attacks, which continued until as late as 1887, the new settlement thrived. By June 1881, Chloride had eight saloons, three general stores, three restaurants, a lumberyard, two butcher shops, a boarding house, livery stable, post office, a Justice of the Peace, and the Pioneer Stage Line ran through town.

Chloride became the center of mining operations in the Apache Mining District and by 1883 was called home to some 3,000 people. The flourishing mining camp expanded to include a school; a newspaper called the Black Range, lawyers, doctors, a hotel, numerous saloons, and at least one brothel over the next several years.

Several mines were started, including the Silver Monument, the largest and most productive mine, as well as the U. S. Treasury, the New Era, the White Mountain, the Wall Street, and several others. 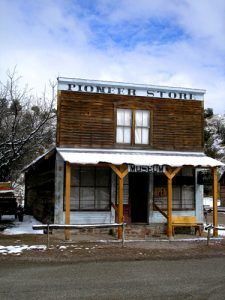 Unlike many mining camps of the American West, Chloride never took on the violent and lawless reputation. For the most part, its citizens were quiet and peaceful; its worst threat was that of the fierce Apache. Chloride did, however, have a large tree they called the “Hangin’ Tree,” which continues to stand in the middle of Wall Street. Perhaps it was this “threat” that helped to keep people in line. No one was ever known to have been hanged from the tree, but it was often utilized when rowdy or drunken cowboys or miners got out of hand. In those cases, the disorderly man would be dunked in the stock tank and chained to the tree until he came to his senses.

One notable incident during Chloride’s heydays was when several town citizens began to receive letters maligning the reputations of several residents in 1886. Soon, a committee was formed to investigate the scandalous letters, which pointed to a 65-year-old physician named James Reekie, who had been practicing in Chloride since 1881. Determined to be rid of the offender, a group of some 30 citizens soon dragged Dr. Reekie to the edge of town, where they tarred and feathered him and ordered him out of the camp.

Like other mining booms throughout the West, Chloride’s life would be a short one. By 1893, the ore deposits were starting to play out, and when, in 1896, the monetary standard was changed to gold, it spelled a death knell for the town. Silver prices plummeted, mines shut down, and people left town. By the turn of the century, the city boasted only about 125 residents.

Over the years, the mining district produced about $500,000 in silver and other ores. Mining continues in the area for Zeolite, a mineral utilized in agricultural products, water, air filtration, and numerous other consumer products.

Today, Chloride is a ghost towner’s dream, with about 27 of its original buildings still standing, including the Pioneer Store, which now serves as an excellent museum.

Its historic main street is lined with false-front structures and adobe buildings, some restored, and some are suffering the effects of time. There are two cemeteries in Chloride that can be viewed.  The 200-year-old oak “Hangin’ Tree” tree still stands in the middle of Wall Street.

Though officially a “ghost town,” the town is occupied by about 20 residents, many of whom are decedents of the founders.

Though all of the buildings in this historic town are quite interesting, the Pioneer Store Museum is the highlight of the visit. The museum, situated in the original 1880 log building, features original store fixtures, pre-1900 merchandise, photographs, town documents, and numerous artifacts from early mining activities. The Pioneer Store was built by a Canadian named James Dalglish, who operated the store until 1897. Afterward, he leased it to individuals who continued store operations until 1908. At that time, it was sold to the U.S. Treasury Mining Company, which utilized it as a commissary for their employees. 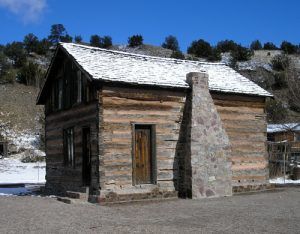 In 1923, the owners closed the store, boarding up the windows and doors, and left all the furnishings and merchandise inside. For almost seven decades, the store remained untouched, as bats and rats made their home of it. Finally, the building was sold in 1989, but it would take many years before it was fully refurbished to the state it is today. The Pioneer Store and the adjacent Monte Cristo Saloon are listed on the New Mexico State Register of Cultural Properties.

To get to Chloride from Truth or Consequences, travel north on I-25 to Exit 83, then left on NM-181, left again on NM-52, and follow signs to Winston. Turn left in Winston at Chloride Road and travel southwest to Chloride.