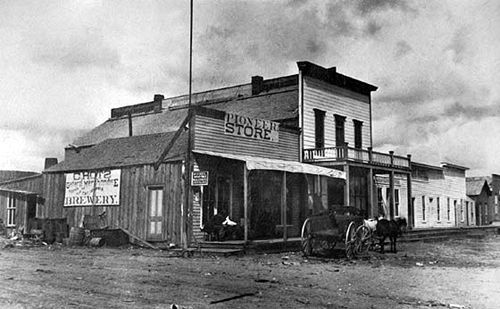 Like many other ghost towns in New Mexico, Lake Valley got its start as a mining camp when silver ore was discovered here in 1878 by cowboy prospector, George W. Lufkin. At about the same time, a rancher named Lou McEvers also discovered silver on his property and soon, they and others began to file a number of claims in the area.

In 1880, McEvers sold his ranch and interest in his mining claims to a storekeeper by the name of John Miller. After trying his hand at mining, Miller found little success and soon sold some of the claims to a group of investors.

Hiring men to dig a shaft, the investors found rich silver ore about 40 feet down and when word got out about the discovery, two mining stock promoters by the names of George D. Roberts and J. Whitaker Wright sent a man named George Daly to evaluate the lode for a stock promotion in February 1881.

Daly was so impressed with the site that he bought all eight mining claims along the outcrop. J. Whitaker Wright joined Daly in April, and the two bought eight more claims. The pair then headed to New York, where they partnered with a man named George D. Roberts and formed four mining companies, all run by another company called the Sierra Grande Silver Mining Company, located in Lake Valley. They also lured famed American paleontologist, Edward D. Cope into investing in the project, as well as becoming President of the Sierra Apache Mining Company and an officer in the other three companies. Stock into the silver mines was then widely sold to investors. 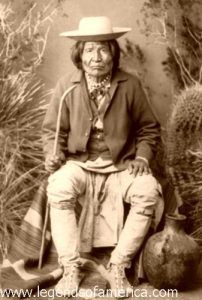 In June 1881, Daly returned to Lake Valley and put men to work digging shafts. That very same summer, the region was being raided by a group of Chiricahua Apache, led by the elderly, but still strong, Apache War Leader – Nana. Though in his eighties, Nana showed no signs of weakness and led his group in raiding ranches and mining camps and fighting in a number of small skirmishes with the U.S. Army. When a Lake Valley area rancher returned to his home on August 17, 1881 to find his wife and children gone and his home burned to the ground, he quickly rode into town for assistance. Though his wife and children had hidden from the Indians and were soon found to be safe, a group of miners and ranchers formed a civilian posse to go after the Apache. Lieutenant George Washington Smith, commander of the local Buffalo Soldiers of the 9th Cavalry, tried to talk Daly and the others out of pursuing the Indians, but when they refused, he and some 15-20 of his men reluctantly joined them.

In the morning of August 19th, the posse had trailed the Apache into a canyon about ten miles west of Lake Valley, where they were ambushed by Nana and his men. Both Daly and Lieutenant Smith were immediately killed and a number of miners wounded.  Sergeant Brent Woods then took command in what resulted as a six-hour battle, in which, at least four soldiers were killed. Finally, Nana and his band withdrew and the posse returned with their dead and wounded back to Lake Valley. Some of those wounded would also later die.

On the very day the posse returned to camp, a man named John Leavitt, who had taken a lease on a claim, owned by Daly’s company, had discovered a large subterranean room laden with silver ore that would later become known as the “Bridal Chamber.”

Leavitt sold his lease to the Sierra Grande Company and mining began in earnest. When the ore assayed at $15,000 or more a ton, the stock promoters publicized it as the richest silver mine ever discovered and they soon sold five million dollars worth of stock in their Lake Valley mining companies. In just the first few months, over a million dollars in silver was mined from the Bridal Chamber and the Sierra Grande Company was paying out $100,000 a month in dividends. 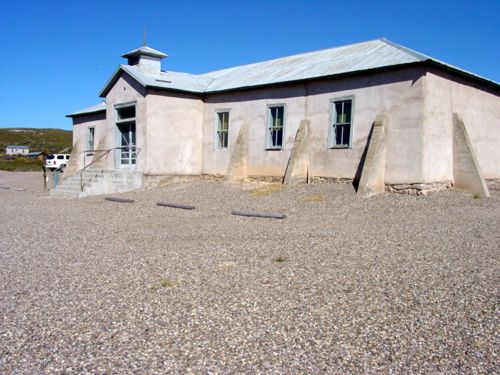 Though Lake Valley’s fortunes were declining by the 20th century, this school was built in 1904, photo courtesy Kathy and Bruce Salsbury, former caretakers.

In the meantime, the town of Lake Valley had sprouted up, named after a small lake in the area which has long since dried up. In no time, the town was filled with stamp mills, smelting works, and other mining operations, as well as three churches, a school, two newspapers, a number of retail businesses, and of course, the ever-present saloons.

The town’s population peaked at about 1000 people. Initially, water for the town had to be brought in from a well located about a mile away until a pump and pipeline were later constructed from the lake.

Though the town was beginning to flourish, the Sierra Grande Company was starting to experience problems, just a year after the Bridal Chamber was discovered. Co-owner, George D. Roberts had begun to develop a reputation for fraudulent mining stock promotions, which was hurting the sale of Lake Valley stock. He soon sold his share of the company out to J. Whitaker Wright. The rich ore of the Bridal chamber was also running out and Sierra Grande’s large profits were waning as quickly as they had increased.

However, the mining problems had not yet reached the town that was developing a somewhat rough reputation, with cattle rustling rampant in the area and stage robberies prevalent. In 1882, gunfighter and lawman, Timothy “Long Hair” Jim Courtright was hired to be the town marshal. However, within a year, he had returned to Texas and would later be shot in a gunfight with an even more famous gunfighter — Luke Short. 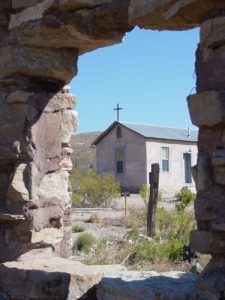 The Lake Valley Chapel first served as a private residence when it was built in about 1920. Later it served as an Episcopalian church known as Saint Columbia, courtesy of Kathy and Bruce Salsbury, former caretakers.

The silver-laden Bridal Chamber mine was played out by 1883 and by August, the Sierra Grande Company discontinued their management of operations in the Lake Valley area.

The Bridal Chamber alone yielded $2,775,000 in ore, however, Sierra Grande shareholders lost money. Though owner, J. Whitaker Wright, became a multi-millionaire promoting mining stocks, he was later convicted of stock fraud in a London Court in 1902 and committed suicide in the courtroom. Daly, of course, had been killed by Apache Indians and his body returned to Lake Valley on the very day that the Bridal Chamber was discovered. President and paleontologist Edward D. Cope lost most of his fortune and was forced to sell his fossil collection, which later became part of the American Museum of Natural History’s collection. George W. Lufkin, one of the first discoverers of silver in the area, died penniless and is buried in the Lake Valley cemetery.

Though the “original” Sierra Grande Company was out of business, other mines continued to be worked in the area, and in 1884, the Santa Fe Railroad built a spur line to Lake Valley. The Sierra Grande Company was taken over by new management and their mines were also reopened. However, the rich heydays for Lake Valley were over. Although mining operations continued until 1893 when the gold standard was implemented, silver prices plummeted, and the mines closed again. The region had produced more than five million dollars in silver over the years, but none of the mines were wildly profitable due to the high equipment and labor expenses required. The mining companies then leased the claims to individuals who continued to work them on a small scale over the next several years. To make matters worse, most of Lake Valley’s Main Street burned down in 1895 and was never rebuilt. 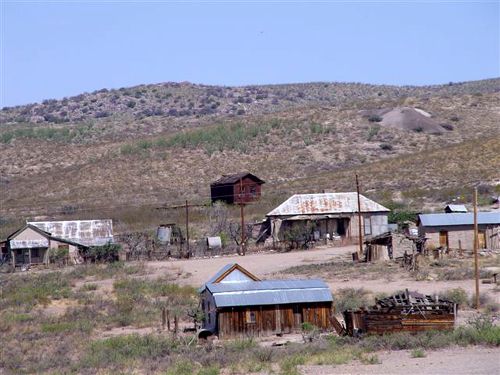 By 1900, the population of Lake Valley had declined to less than 200 people but remained as a supply center for local ranchers and the few remaining miners. That same year, a man named Lucius Fisher won the vast majority of the mining property in a poker game in Denver, Colorado. Fisher tried to start large scale mining operations again but gave up the effort within a few years. The depression caused a further decline of the town and when the railroad spur was closed in the 1930s, it was reduced once again. During World War II, some mines were reopened to produce manganese, but this was also short-lived and by the 1950s there were only about 20 people left in the dying settlement. The post office closed its doors forever in 1955. The last resident of the town moved out in 1994, leaving Lake Valley a true ghost town.

Today, most of the property is owned by the Bureau of Land Management and is situated along the Lake Valley Scenic Byway. Preservation has been made to the old site, which continues to display a number of buildings. The site is maintained by local caretakers and is open Thursdays through Mondays. Self-guided tours are available starting at the old schoolhouse. A few properties, located beyond a fence, are private and cannot be visited. There is also the nearby Lake Valley Cemetery which can also be toured. 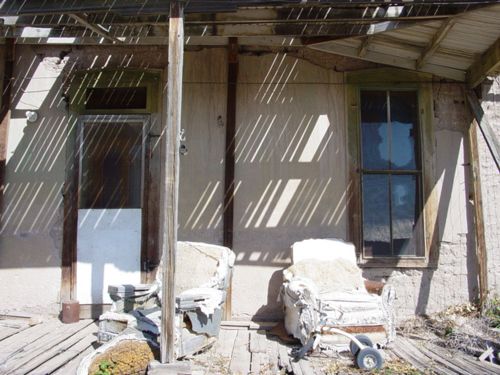 The last residents of Lake Valley were Pedro and Savina Martinez who resided in what was once the old Bella Hotel. Mr. Martinez lived in Lake Valley for 90 years before he finally moved to Deming, New Mexico in 1994. Photo courtesy Kathy and Bruce Salsbury, former caretakers. 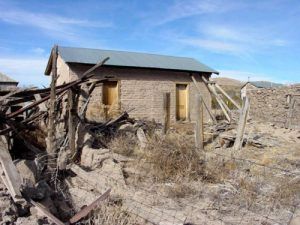 This building was once occupied by Lake Valley Justice of the Peace, Judge Keil, who provided over the coroner’s jury for yet another Old West Feud known as the Lake Valley War. The “war” occurred in 1921 over a water well, culminating in a shoot out that took the lives of several cowboys.Photo courtesy Kathy and Bruce Salsbury, former caretakers. 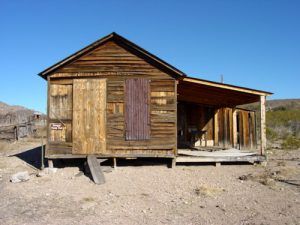