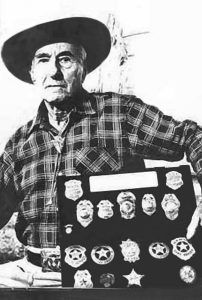 Fred Lambert, sworn in at the age of 16, was the youngest Territorial Marshall from New Mexico.

In 1887 Charles Fred “Cyclone” Lambert was born to Henri and Mary Lambert in Room #31 of the famous St. James Hotel in Cimarron, New Mexico.

It was a blustery winter night with a blizzard blowing outside, and at the time of his birth, one of the hotel guests, and good friend of the Lambert family, laughingly commented that he should be named “Cyclone Dick,” much to Mary’s chagrin. However, she went along with it, and the couple soon asked the guest to be Fred’s godfather, which he gladly accepted. The guest and Fred’s godfather was none other than Buffalo Bill Cody. Buffalo Bill would later give Fred instruction in the use of guns when he got older.

The Inn hosted many famous and infamous people, including Wyatt Earp, Bat Masterson, Jesse James, Black Jack Ketchum, Clay Allison, and many more. Fred grew up knowing some of these people and was a bit of a showman himself. During the saloon’s early heyday, 27 men were shot and killed. In fact, the saloon was so notorious that during the 1870s, the favorite expressions in Cimarron were: “Who was killed at Lambert’s last night?” and “It appears Lambert had himself another man for breakfast.” 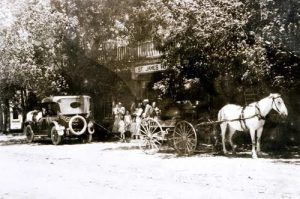 Writing on back says: ‘In front of the “Old Home,” St. James Hotel.’

In 1902, the dining area was remodeled by the Lambert sons, who counted over 400 bullet holes in the ceiling, many of which can still be seen today. A double layer of heavy wood prevented anyone from sleeping upstairs from being killed. Today, the ceiling of the dining room still holds 22 bullet holes.

At 15, Fred was a freight wagon driver on the run between Cimarron and Taos. At about the same time, he took a job with the Indian Police. On one of his first assignments, staking out Picuris Peak near the Taos Pueblo, Fred and two other deputies got into a brawl with some outlaws. Suspecting moonshine traffic, the trio watched as a train of mules and six men came down the trail loaded with whiskey. When Fred approached them, the leader, Juan Gallegos, drew his gun. But Fred was too quick for him and grabbed the gun around the cylinder at the same time the hammer came down, smashing the web of his hand. With his other hand, Fred pulled his own gun and struck Gallego between the eyes. Gaining the upper hand, the deputies arrested the entire gang, but Fred would live with a scar on his hand for the rest of his life.

At 16, Fred would become the youngest Territorial Marshall from New Mexico and continue to serve as a tough lawman in many capacities for his entire life.

When Fred was still learning the tricks of the Sheriff trade, he was befriended by a man named Frank Harrington, the man who shot Black Jack Ketchum, which ultimately resulted in his arrest. Frank took him out behind the stone walls of the Cimarron Jail and taught him to shoot.

By the time Fred became the Sheriff of Cimarron, the wild days of Cimarron were over. As Fred walked the streets of Cimarron, the worst thing that usually happened was taking care of a drunken “Bunny” Alpers. Alpers, who also happened to be the mayor, had a habit for Saturday night binges. Whenever “Bunny” passed out or there was trouble at the tavern, the barkeeper would hang an old red railroad lantern on the porch, a signal for Fred to come and help. When Bunny passed out in the chair, Fred would load him in a wheelbarrow and haul him home, where he would dump him in front of his house. 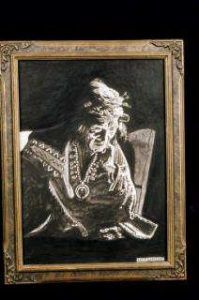 Fred was also many things other than a lawman. Somewhere along the line, he married a woman named Katie Hoover, and they adopted a young Navajo boy named Manuel Cruz. When not serving for the law, he was also an active rancher. Fred also took on the restoration of the Aztec Mill built in 1864 by Lucien B. Maxwell of the Maxwell Land Grant. For many years, Fred operated the century-old Maxwell grist mill as a museum and a tourist attraction. The Cimarron Historical Society now operates the Astec Mill Museum. Due to his efforts, many other historic landmarks in Cimarron were made sites of markers that tell their story.

Mr. Lambert was also caring, thoughtful, and a well-read man. He wrote poetry, published and contributed to several books, and made many pen and ink drawings and paintings during his life. He published a book of his poems and pen and ink drawings titled Bygone Days Of The Old West and contributed to other books including, A Cowboy Detective, and New Mexico, A Guide to the Colorful State. He assisted in preparing a book on the history of the New Mexico Mounted Police, The Thin Gray Line, and wrote a brief introduction entitled, “A Few Words From an Old Mountie.” He also served as a consultant for other publications such as Satan’s Paradise: From Lucien Maxwell to Fred Lambert and Haunted Highways. 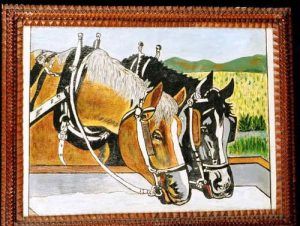 “Fool Around and Fish”….

Oh, the days are getting balmy
And the grass is showing green.
While the leaves are all awakening.
Fine as I have ever seen;
And I’ve got that same old feeling
That comes “oer” me every spring,
When the brook begins it’s calling
And the birds begin to sing……

There’s a silv’ry pool that’ hidden
Well from anyone, I know…
Where the sentinels are giants..!
With their branches hanging low…
There, no sound of habitation…
There, no sign of sordid quest,
But the peaceful slumbering quiet,
Where a man can truly rest……