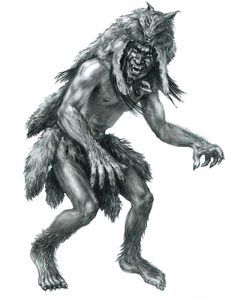 In the Navajo culture, a skinwalker is a type of harmful witch who has the ability to turn into, possess, or disguise themselves as an animal.

This witch is called “yee naaldlooshii” by the Navajo, which translates to “with it, he goes on all fours.” It is just one of several types of Navajo witches and is considered the most volatile and dangerous.

For the Navajo people, witchcraft is just another part of their spirituality and one of the “ways” of their lives. As such, witchcraft has long been part of their culture, history, and traditions. Witches exist alongside humans and are not supernaturals.

The Navajo believe there are places where the powers of both good and evil are present and that those powers can be harnessed for either. Medicine men utilize these powers to heal and aid members of their communities, while those who practice Navajo witchcraft, seek to direct the spiritual forces to cause harm or misfortune to others. This type of Navajo witchcraft is known as the “Witchery Way,” which uses human corpses in various ways such as tools from the bones, and concoctions that are used to curse, harm, or kill intended victims

The knowledge of these powers is passed down from the elders through the generations.

The Navajo are part of a larger culture area that also includes the Pueblo people, Apache, Hopi, Ute, and other groups that also have their own versions of the Skinwalker, but each includes a malevolent witch capable of transforming itself into an animal.

Among these tribes, a number of stories and descriptions have been told throughout the years about the Skinwalkers. 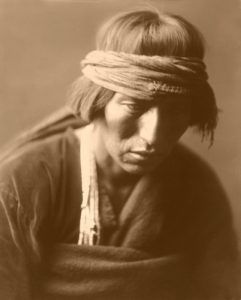 Sometimes, these witches evolved from living their lives as respected healers or spiritual guides, who later chose to use their powers for evil. Though they can be either male or female, they are more often male. They walk freely among the tribe during the day and secretly transform under the cover of night.

In order to become a Skinwalker, he or she must be initiated by a secret society that requires the evilest of deeds – the killing of a close family member, most often a sibling. After this task has been completed, the individual then acquires supernatural powers, which gives them the ability to shape-shift into animals. Most often, they are seen in the form of coyotes, wolves, foxes, cougars, dogs, and bears, but can take the shape of any animal. They then wear the skins of the animals they transform into, hence, the name Skinwalker. Sometimes, they also wore animal skulls or antlers atop their heads, which brought them more power. They choose what animal they wanted to turn into, depending on the abilities needed for a particular task, such as speed, strength, endurance, stealth, claws, and teeth, etc. They may transform again if trying to escape from pursuers.

Because of this, the Navajo consider it taboo for its members to wear the pelt of any predatory animal. However, sheepskin, leather, and buckskin are acceptable. 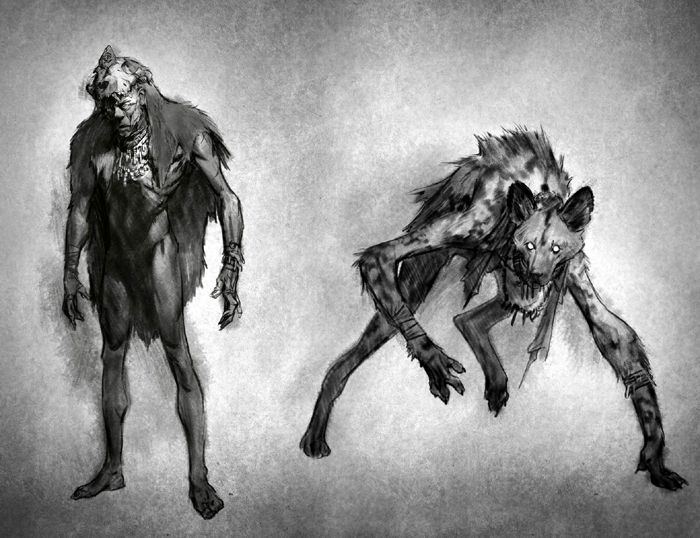 The skinwalkers are also able to take possession of the bodies of human victims if a person locks eyes with them. After taking control, the witch can make its victims do and say things that they wouldn’t otherwise.

The evil society of the witches gather in dark caves or secluded places for several purposes – to initiate new members, plot their activities, harm people from a distance with black magic, and perform dark ceremonial rites. These ceremonies are similar to other tribal affairs, including dancing, feasts, rituals, and sand-painting, but were “corrupted” with dark connotations. The evildoers are also said to engage in necrophilia with female corpses, commit cannibalism, incest, and grave robberies. During these gatherings, the Skinwalkers shape-shift into their animal forms or go about naked, wearing only beaded jewelry and ceremonial paint. The leader of the Skinwalkers is usually an old man, who is a very powerful and long-lived Skinwalker. 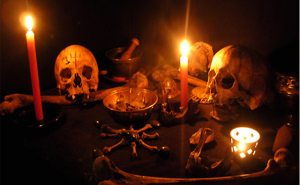 Skinwalkers also have other powers including reading others’ minds, controlling their thoughts and behavior, causing disease and illness, destroying property, and even death.

Those who have talked of their encounters with these evil beings describe a number of ways to know if a skinwalker is near. They make sounds around homes, such as knocking on windows, banging on walls, and scraping noises on the roof. On some occasions, they have been spied peering through windows. More often, they appear in front of vehicles in hopes of causing a serious accident.

It is said that, in addition to being able to shapeshift, the Skinwalker is also able to control the creatures of the night, such as wolves and owls, and to make them do its bidding. Some are able to call up the spirits of the dead and reanimate the corpses to attack their enemies. Because of this, the Indians rarely ventured out alone. 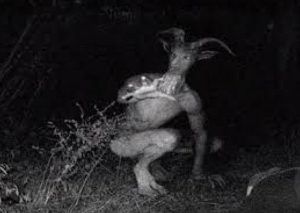 Its supernatural powers are uncanny, as they are said to run faster than a car and have the ability to jump high cliffs. They are extremely fast, agile, impossible to catch and leave tracks that are larger than those of any animal. When they have been seen, they have been described as not quite human and not fully animal. They are usually naked, but some have reported seeing the creature wearing tattered shirts or jeans.

The Skinwalker kills out of greed, anger, envy, spite, or revenge. It also robs graves for personal wealth and to collect much-needed ingredients for use in black magic. These witches live on the unexpired lives of their victims and they must continually kill or perish themselves.

Skinwalkers and other witches have long been blamed for all manner of unexpected struggles and tragedies through the years, including sickness, drought, poor crops, and sudden deaths. Even smaller or individual problems such as windstorms during dances, alienation of affection by mates, the death of livestock, and reversal of fortune, were often believed to be the work of a witch. 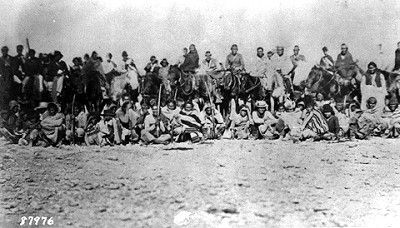 This was most apparent with the Navajo Witch Purge of 1878, which initially evolved from a cultural response to so many people moving across and onto their lands. After a series of wars with the U.S. Army, the Navajo were expelled from their land and forced to march to the Bosque Redondo (Fort Sumner) in New Mexico in what is known as the Long Walk of the Navajo in 1864.

There, the people suffered from bad water, failed crops, illness, and death, reducing their numbers dramatically. After four years, the government finally admitted they had made a mistake and the Navajo were allowed to return to their homeland in the Four Corners area.

During these years, many of the tribe’s members were said to have turned to shape-shifting to escape the terrible conditions. In the meantime, the rest of the tribe were convinced that their gods had deserted them.

Once the people had returned to their homeland, their conditions improved, but the dreaded skinwalkers, for whom they blamed for their years on the bleak reservation, were still among them. Accusations of witchcraft and the hunting of the skinwalkers began. When someone found a collection of witch artifacts wrapped in a copy of the Treaty of 1868, the tribal members unleashed deadly consequences. The “Navajo Witch Purge” occurred in 1878, in which 40 Navajo suspected witches were killed in order to restore harmony and balance for the tribe.

Today, most of the tales of sightings of these witches do not include death or injury, but rather, are more “trickster-like.”

Numerous people have told stories of swift animals running alongside their vehicles, matching their speed. After a short period, however, they run off into the wilderness. Along the way, these animals sometimes turn into a man, who sometimes bangs on the hood.

Another story tells of a man who was making repairs on an old ranch home when he began to hear loud laughter coming from the nearby sheep pens. Thinking he was alone, he went to investigate and found all of the sheep but one huddled in one corner of the pen. However, there was a lone ram separated from the group that was standing upright and laughing in a very human manner. After the man locks eyes with the ram, he sees that his eyes are not that of an animal, but very like a human’s. The animal then casually walked away on all four legs.

Some say they have seen them running through the night, sometimes turning into a fiery ball, leaving streaks of color behind them. Others have seen angry-looking humanoid figures looking down on them from cliffs, mountains, and mesas.

In the 1980s one of the most notable events occurred when a family was driving through the Navajo Reservation. As they slowed to make a sharp curve, something jumped from the ditch. It was described as black, hairy, and wore a shirt and pants. A few days after this event, at their home in Flagstaff, Arizona, the family was awakened to the sounds of loud drumming and chanting. Outside their home were three dark forms of “men” outside their fence. However, these shadowy creatures were seemingly unable to climb the fence and soon left.

These events have occurred in the Four-Corners area of southwest Colorado, southeast Utah, northeast Arizona, and northwest New Mexico. 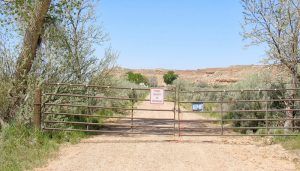 In the 1990s, a ranch in northeast Utah, far away from the Navajo Reservation, became the partial focus of the Skinwalkers. Called the Sherman Ranch, the Skinwalker Ranch, and the UFO Ranch, this place has a history of UFOs, aliens, cattle mutilations, and crop circles. Located near the Ute Indian reservation, these people have long thought that the Navajo put a curse on their tribe in retribution for many perceived transgressions and since then, the skinwalkers have plagued the Ute people. (See Article HERE.)

Witchcraft represents the antithesis of Navajo cultural values and is not tolerated. They work to avoid it, prevent it, and cure it in their daily behaviors. However, when it exists, their laws have always said that when a person becomes a witch, they have forfeited their humanity and their right to exist, so they should be killed.

However, skinwalkers are notoriously hard to kill and attempts are usually unsuccessful. Trying to kill one will often result in the witch seeking revenge. Successful killing generally requires the assistance of a powerful shaman, who knows spells and rituals that can turn the Skinwalker’s evil back upon itself. Another alternative is to shoot the creature with bullets that have been dipped into white ash. However, this shot must hit the witch in the neck or the head.

Traditionally, the Navajo will not speak with outsiders about these creatures, for fear of retribution by the skinwalkers. For that matter, it is a taboo subject amongst the natives themselves.

“These are not things that need or should be discussed by outsiders. At all. I’m sorry if that seems ‘unfair,’ but that’s how our cultures survive.” – Dr. Adrienne Keene, Native American academic, writer, and activist 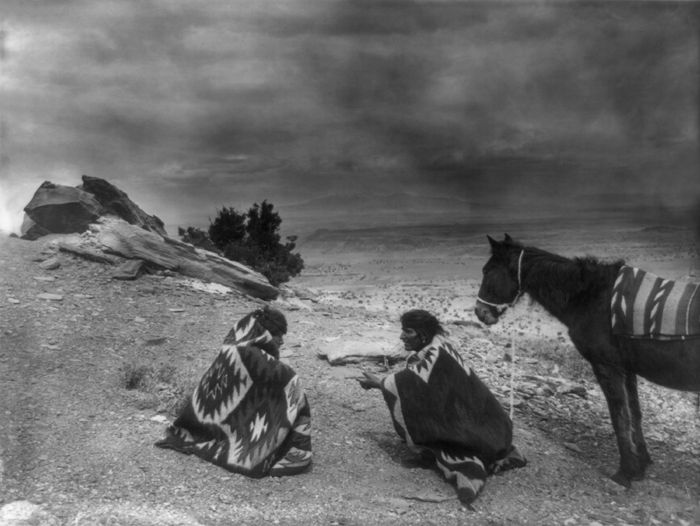