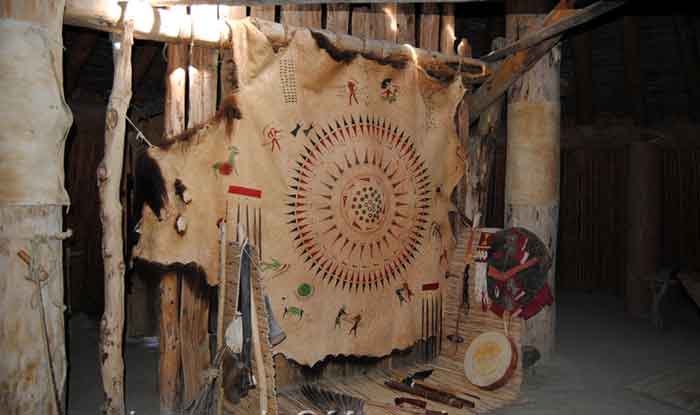 For the earth he drew a straight line,
For the sky a bow above it;
White the space between for day-time,
Filled with little stars for night-time;
On the left a point for sunrise,
On the right a point for sunset,
On the top a point for noontide,
And for rain and cloudy weather
Waving lines descending from it.
From The Song of Hiawatha by Henry Wadsworth Longfellow

When European explorers arrived in America, Native Americans did not communicate through writing as we know it. Instead, they told stories (oral histories) and created pictures and symbols. This type of communication is not unique to Native Americans, as long before writing was developed, people around the world recorded events, ideas, plans, maps, and feelings by drawing pictures and symbols on rocks, hides, and other surfaces.

Historic pictorial symbols for a word or a phrase have been found dating to before 3000 BC. These symbols, called pictographs, are created by painting on rock surfaces with natural pigments. These natural pigments included iron oxides found in hematite or limonite, white or yellow clays, and soft rock, charcoal, and copper minerals. These natural pigments were mixed to produce a palette of yellow, white, red, green, black, and blue. Historic pictographs are usually found under protective ledges or in caves where they have been protected from the weather. 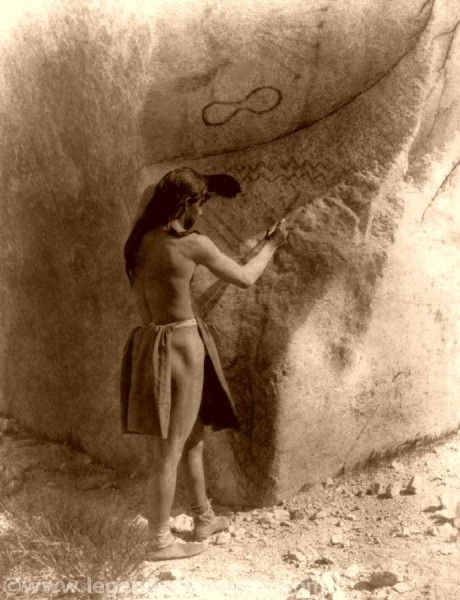 Another similar form of communication, called petroglyphs, were carved, pecked, or abraded into stone surfaces. This carving could produce a visible indentation in the rock or it could cut deeply enough to reveal unweathered material of a different color below.

Native American symbols were like words and often had one or more definitions and/or contained different connotations. Varying from tribe to tribe, it can sometimes be difficult to know their meanings, while other symbols are very clear. With the multiple languages spoken by Native American tribes, symbols or “picture writing” was often used to convey words and ideas. Symbols were also used to decorate homes, were painted on buffalo hides, and recorded important events of the tribe. 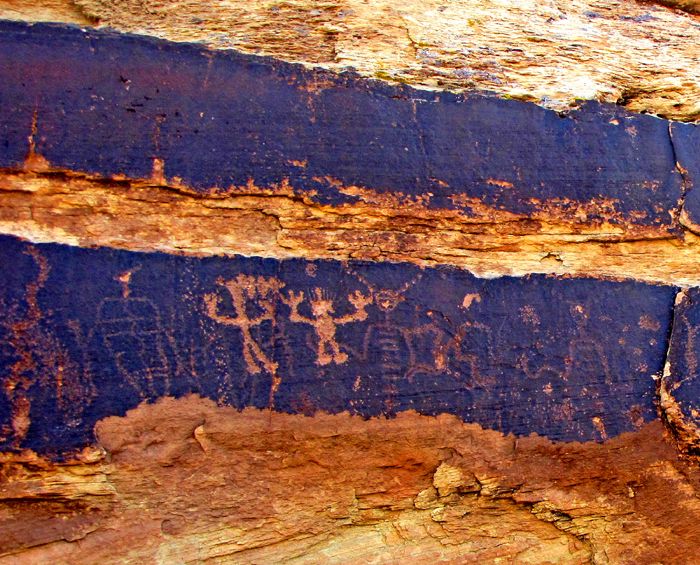 These images are a valuable record of cultural expression and hold profound spiritual significance for contemporary Native Americans and for the descendants of the early Spanish settlers.

The arrival of Spanish people to the Southwest in 1540 had a dramatic impact on the lifestyle of the pueblo people. In 1680 the Pueblo tribes rose up in revolt of Spanish rule, and drove the settlers out of the area and back to El Paso, Texas. In 1692 the Spanish resettled in the Albuquerque, New Mexico area. As a result of their return, there was a renewed influence of the Catholic religion, which discouraged participation by the Puebloans in many of their traditional ceremonial practices. As a consequence, many of these practices went underground, and much of the image making by the Puebloans decreased.

There were many reasons for creating the Petroglyphs, most of which are not well understood by modern society. Petroglyphs are more than just “rock art,” picture writing, or an imitation of the natural world. They should not be confused with hieroglyphics, which are symbols used to represent words, nor thought of as ancient Indian graffiti. Petroglyphs are powerful cultural symbols that reflect the complex societies and religions of the surrounding tribes.

The context of each image is extremely important and integral to its meaning. Today’s native people have stated that the placement of each petroglyph image was not a casual or random decision. Some petroglyphs have meanings that are only known to the individuals who made them. Others represent tribal, clan, kiva or societal markers. Some are religious entities and others show who came to the area and where they went. Petroglyphs still have contemporary meaning, while the meaning of others is no longer known, but are respected for belonging to “those who came before.”

Throughout the United States, there are thousands of pictographs and petroglyphs with the greatest concentration in the American Southwest. The site that has the most is the Petroglyph National Monument in New Mexico. At the monument, archaeologists have estimated there may be over 25,000 petroglyph images along the 17 miles of escarpment. A small percentage of the petroglyphs found within the park pre-date the Puebloan time period, perhaps reaching as far back as 2000 B.C.  Other images date from historic periods starting in the 1700s, with petroglyphs carved by early Spanish settlers. It is estimated 90% of the monument’s petroglyphs were created by the ancestors of today’s Pueblo people. Puebloans have lived in the Rio Grande Valley since before 500 A.D., but a population increase around 1300 A.D. resulted in numerous new settlements. It is believed that the majority of the petroglyphs were carved from about 1300 through the late 1680s.