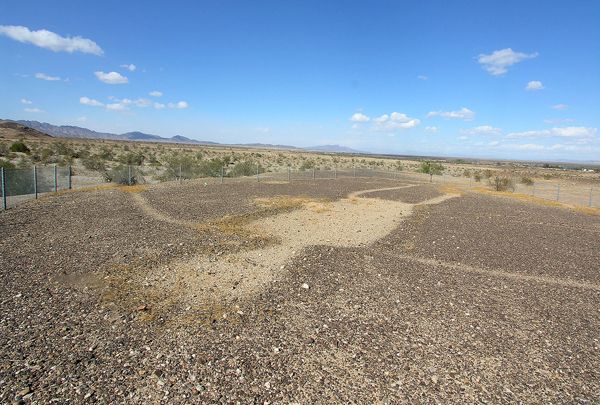 Intaglios, also called geoglyphs, are gigantic human or animal figures drawn on the ground’s surface. While the most famous geoglyphs in the world are the Nazca Lines in Peru, there are over 200 intaglios in the Colorado Desert of the American Southwest. They are the only known desert intaglios in North America.

The best known of these are located west of the Colorado River about 15 miles north of Blythe, California, situated on two low mesas.

Scientists have not been able to agree on who made these giant drawings on the desert floor, nor, when they were made. Theories range from a couple of hundred years up to 10,000 years old. Radiocarbon dates for the figures range from 900 BCE to 1200 CE.

Some historians believe that the figures were made by the Mohave and Quechan Indians somewhere between 450 and 2,000 years ago, and represent Mastamho, the creator of life.

Others believe the figures represent powerful individuals in an Indian clan or depict humans interacting with their natural surroundings. Most of the human figures are etched next to or near animal figures. 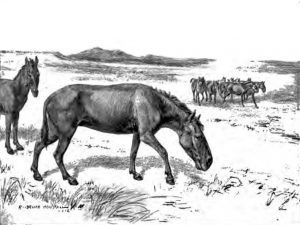 Part of the dating problem is that the animal figures appear to be horses. If so, they must have been carved either before American horses went extinct some 10,000 years ago or more recently after the Spaniards arrived in California in 1540.

Another theory holds that some modern horses did exist in North America before the Spaniards, but were regarded as food sources rather than bests of burden. The age of the “drawings” cannot be dated accurately.

The Blythe Intaglios, situated in three locations, contain three abstract human shapes, two four-legged animals resembling horses, and a spiral figure thought to be a coiled serpent, various geometric lines, and a dance ring that is 140 feet in diamater. The largest human figure in the Blythe Intaglio group is 171 feet long and the smallest is 95 feet. They are best viewed from the air.

The Geoglyphs were created by scraping away the top layers of darker rocks or pebbles to reveal a a lighter soil beneath. The displaced rocks outlined the figures and the exposed soil was stamped down which makes it more difficult for plants to grow in the lines.

While these “gravel pictographs” are found through the deserts of southeastern California, human figures are found only near the Colorado River. Other intaglios depict mountain lions, birds, snakes, and unidentified animal like figures and geometric shapes. The figures are so immense that many of them were not observed by non-Indians until the 1930s.

In 1932, George Palmer, a pilot flying between Las Vegas, Nevada and Blythe, California noticed the Blythe geoglyphs. His find led to a survey of the area by the Natural History Museum of Los Angeles County, California. 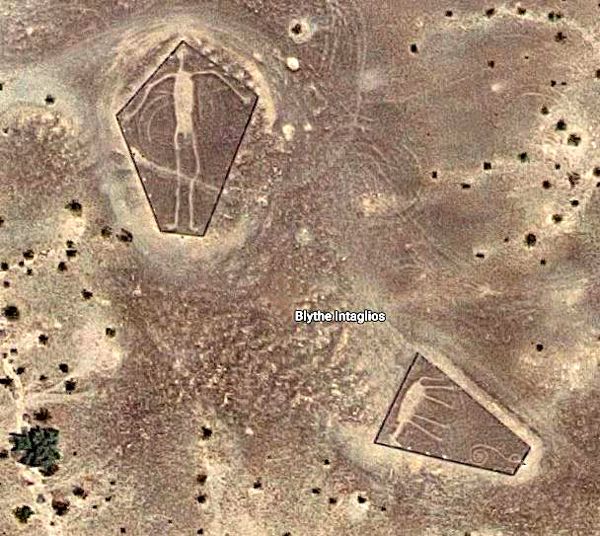 The interest in the Blythe intaglios led to the search for and discovery of more desert intaglios. The Bureau of Land Management erected fences in 1974 to protect the intaglios and the Blythe Intaglios were placed on the National Register of Historic Places in 1982.

Similar intaglios, named the Ripley Group, were found nearby in Arizona across the Colorado River from Ripley, California.

No far from Blythe, at an associated site in Parker, Arizona is a different set of intaglios, similar in their abstract nature. A serpent glyph near Parker, complete with eyes and rattles, sprawls for also most 150 feet across the desert floor.

The desert figures are very similar to those figures carved on the Nazca Plains in Peru. Like the Nazca figures, both cover a vast area, include animal figures, and were made in the same manner by scraping off the top level of rocks.

Of the nearly 60 sites containing humanoid figures, almost all of them have a deeply entrenched torso, while the limbs are much more shallowly etched into the surface. Often, the head and/or one or more arms of the figure will not have been represented at all.

The majority of the Blythe geoglyphs are located 15.5 miles north of Blythe, California, off Highway 95, at the Interstate 10 exit. Visitors will see a small stone cairn on the right. On the left is a fenced dirt road that quickly leads to the Intaglios 1/4 mile west. A historical marker commemorates the site. 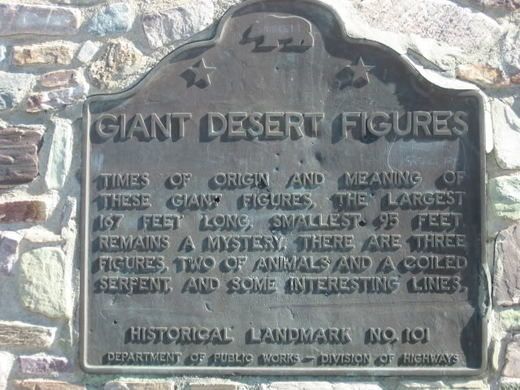