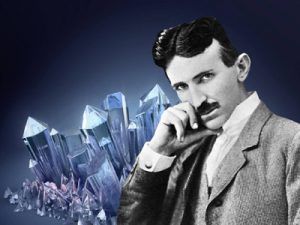 In a crystal we have clear evidence of the existence of a formative life principle, and though we cannot understand the life of a crystal, it is nonetheless a living being.”

For thousands of years, precious and semi-precious gemstones have been utilized for mental, physical and spiritual healing. Utilized as an additional technique along with more traditional medical practices, crystals and other stones have been used to cure ailments, protect against illness, disease, and injury; to provide mental balance and stability, and for spiritual purposes.

Proponents in this alternative healing technique continue to believe that certain stones and crystals act as conduits for healing by allowing positive energies to flow from the stone to the body, while the body releases negative energy into the stones. At the turn of the century, Nikola Tesla, a renowned inventor, electrical & mechanical engineer, physicist, and futurist, declared all things in the universe are forms of energy with their own frequency and vibration and proved how certain forms of energy can alter the vibrational resonance of other forms of energy. This is why many continue to believe in the power of crystals and other stones in healing practices.

Obviously the ancients were not aware of this in any scientific basis, but, numerous cultures have long utilized stones in healing, protection, and spiritual practices.

The first historical references of the use of crystals come from ancient the Ancient Sumerians, who included crystals in magic formulas. Crystal use was also said to have been widespread on the legendary lost continent of Atlantis.

In Roman culture, talismans and amulets of crystal were known to have been used, most often for enhancing health, attracting desirable people or things, and for providing protection in battle.

The ancient Egyptians were known to have utilized crystals in many ways, including burying their dead with crystals, carrying and wearing crystal jewelry for health, protection, well being, to attract love, foster sex appeal and more. They were known to have used lapis lazuli, turquoise, carnelian, emerald, clear quartz, topaz, and peridot in amulets and jewelry.

In Greece, stones have been utilized in various ways so extensively, that some of the mineral names are of Greek origin. In fact, the word crystal comes from the Greek word for ice, as the ancients regarded crystal as pure water that had frozen so deeply that it would always remain solid. In ancient times, the Greek often rubbed hematite upon soldier’s bodies prior to entering battle with the idea that it made them invincible. Hematite, an iron ore, comes from the word for blood and the ancient Greeks associated iron with Aries, the god of war. The word amethyst means ‘not drunken’ and was worn as an amulet to prevent both drunkenness and hangovers. Greek sailors wore a variety of amulets to keep them safe at sea.

In India, crystals have long been seen as valuable for healing emotional and metaphysical imbalances. In Hinduism, the Kalpa tree, or wish-granting tree, is made out of crystals and precious stones. The use of healing crystals is documented within the Hindu Vedas, a large body of ancient text, which references numerous stones and their healing abilities such as sapphires that are thought to bring astuteness, clarity and mental balance, while jasper is said to bring harmony, sexual vitality, and balance.

Stones and crystals were also used in Asia with the Chinese incorporating crystal in various healing sessions including acupuncture with crystal-tipped needles. Jade has been highly valued in China since ancient times, known to have been used since before 3000 BC. The stone was incorporated into numerous items including beads, chimes, ornamental decorations, musical instruments, and even armor. The Chinese considered Jade to have strong healing properties for kidneys and was considered a stone of concentrated love essence. In Japan fortune telling with crystal spheres was common.

Elsewhere, the Maoris of New Zealand wore jade pendants representing the ancestor spirits, and continue to believe that the stone is lucky. In the Americas, Jade was recognized as a kidney healing stone in South America and jade masks were utilized in burials in Mexico. The Zuni tribe in New Mexico have long made stone fetishes, representing various animal spirits. Other Native American tribes still hold precious stones, especially turquoise, azurite and phenakite, sacred. All over the world, turquoise has been worn to give strength and health and jaspers have long been believed to provide strength and calm. Amber has been of the most widely used in talismans and amber beads have been discovered in Europe, dating back some 12 thousand years ago.

Today, this style of alternative healing is known as crystal therapy or crystal healing, and within this type of therapy, all stones — raw, natural, tumbled, polished, gemstones, etc — are referred to as crystals.

Agate – A variety of Chalcedony, agate comes in numerous colors and is known for providing protection, strength and harmony for the body, mind, and spirit.

Emotionally, it can eliminate and transform negativity, enhances mental function and creativity, improves concentration, perception and analytical abilities; and soothes and calms, healing inner anger or tension and creates a sense of security and safety. It is also known as a good luck stone.

A very protective stone it was historically placed in water for cooking or drinking to dispel sickness and used on the breastplates of armor to give warriors strength and energy. 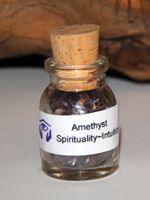 Amethyst – Also called the Sobriety Stone and the Master Healing Crystal, Amethyst Ranges in color from light, slightly-pinkish violet to deep purple, Amethyst is a powerful and protective stone, while at the same time acts as a natural calming agent has healing and cleansing powers.

Emotionally, it relieves stress, soothes irritability, balances mood swings, and dispels anger, fear, negativity, sadness, and anxiety. It is a good crystal in healing personal losses, grief, and helping to bring peace, happiness, and contentment during transitional periods. Placing it under the pillow helps insomniacs and induces prophetic dreams.

It is called the Sobriety Stone as it has a sobering effect on overindulgence of alcohol, smoking, drugs or other addictions. Physically, it boosts hormone production, strengthens the immune system, cleanses blood, eases headaches and other pain, reduces swelling, heals skin conditions, respiratory issues, and more.

Fine amethysts have been set in religious jewelry and royal crown jewels for ages. It was once considered equal in value to ruby, emerald, and sapphire. Because of its wine-like color, early Greek legends associated amethyst with Bacchus, the god of wine.

Arrowhead – Arrowheads may be made of numerous types of stones and the sizes and styles varied widely depending upon the intended use. Regardless of which stone arrowheads are carved from, Native Americans have long believed that wearing a hand-carved arrowhead, as a talisman around the neck, is a symbol of protection, courage and strength.