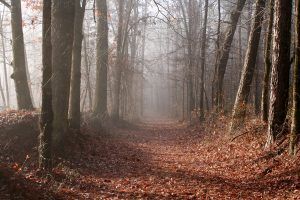 Many of the mounds are located on or near the Natchez Trace Parkway, which commemorates a historic route used by American Indians, pioneer settlers, traders, and soldiers during the late 18th and early 19th centuries. The Parkway incorporates numerous visitor stops of historic, natural, and archeological interest, including five of the mound sites highlighted herein — Bear Creek, Pharr, Bynum, Boyd, and Emerald. While not directly on the Natchez Trace Parkway, but, situated very nearby, can be found the sites of Owl Creek, Pocahontas, Grand Village of the Natchez Indians. These sites are listed below for visitors traveling from north to south along the parkway. 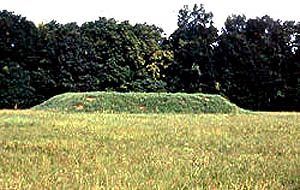 Bear Creek Mound – This square, flat-topped mound was built in several stages for ceremonial or elite residential use sometime between 1100 and 1300 A.D., during the Mississippian period. Burned daub (mud plaster used in building construction) found on the mound during archeological excavation indicates the former presence of a temple or chief’s house. A small, contemporaneous habitation area is located to the south and east of the mound. When acquired by the National Park Service the mound had been greatly reduced in height by plowing. Following excavation in 1965, the mound was restored to its estimated original dimensions of about eight feet high by 85 feet across the base. The site is located along the Natchez Trace Parkway (milepost 308.8), about 45 miles northeast of Tupelo, Mississippi, at the Alabama state line. Open to the public daily, free of charge.

Owl Creek Site – The five Mississippian period platform mounds at this site were built between 1100 and 1200 A.D. The U.S. Forest Service owns two of the mounds including the largest 17-foot-high Mound I. Both are open to public visitation. Archeological excavations conducted at the site in 1991-1992 by Mississippi State University revealed the foundation remains of a ceremonial temple or elite residence that once stood atop Mound I. Structural remains were found on two other mounds as well. The scant presence of habitation debris in the areas between and adjacent to the mounds suggests that the site may have been occupied on a long-term basis by only a few people, probably those of high social rank. It is also possible that the site was completely vacant much of the time, visited by inhabitants of the surrounding region only on ceremonial or other important social occasions. The site is located in Tombigbee National Forest, 2 ½ miles west of Natchez Trace Parkway on Davis Lake Rd. From the Parkway, take the Davis Lake exit (milepost 243.1), about 18 miles southwest of Tupelo, Mississippi. Open to the public daily, free of charge. 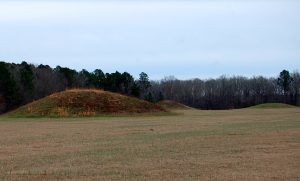 Pharr Mounds – This site complex consists of eight burial mounds built during the Middle Woodland period, between 1 and 200 A.D. Ranging in height from two to 18 feet, the mounds are distributed over an area of about 85 acres. They comprise one of the largest Middle Woodland ceremonial sites in the southeastern United States. Four of the mounds were excavated in 1966 by the National Park Service. The mounds covered various internal features, including fire pits and low, clay platforms. Cremated and unburned human remains were found in and near these mounds, as were various ceremonial artifacts, including copper spools and other copper objects, decorated ceramic vessels, lumps of galena (shiny lead ore), a sheet of mica, and a greenstone platform pipe. The copper, galena, mica, and greenstone did not originate in Mississippi; they were imported long distances through extensive trade networks. Such ritually significant non-local items typify the Middle Woodland period. The site is located on the Natchez Trace Parkway (milepost 286.7), about 23 miles northeast of Tupelo, Mississippi. Open to the public daily dawn to dusk, free of charge. 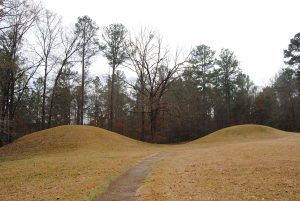 Bynum Mounds and Village – The six burial mounds and associated habitation area at the Bynum site were built during the Middle Woodland period, between 100 B.C. and 100 A.D. The mounds range in height from five to 14 feet. Five of them were excavated by the Natchez Trace Parkway in the late 1940s. The two largest mounds have been restored for public viewing. Mound A, the southernmost of the two restored mounds, contained the remains of a woman placed between two parallel burned oak logs at the mound’s base. This individual was buried with an ornamental copper spool at each wrist. Three additional sets of human remains were also found, consisting of the cremated traces of two adults and a child. Mound B, the largest at the site, covered a log-lined crematory pit. An L-shaped row of 29 polished greenstone celts (ax heads) and the cremated and unburned remains of several individuals were located on the ash-covered floor. Other artifacts found in ceremonial context included copper spools, 19 chert projectile points imported from Illinois, and a piece of galena (shiny lead ore). Greenstone, copper, and galena, like the distinctive projectile points, do not originate in Mississippi. These high-prestige goods, like those found at the Pharr Mounds, were imported through long-distance trade networks. The site is located on the Natchez Trace Parkway (milepost 232.4), about 28 miles southwest of Tupelo, Mississippi. Open to the public daily, free of charge.

Boyd Mound – Most known burial mounds in Mississippi date to the Middle Woodland times (circa 100 B.C. to 400 A.D.). However, the six small burial mounds at the Boyd site were built much later, during the Late Woodland and Early Mississippian periods (circa 800 to 1100 A.D. ). One of these mounds, Mound 2, is situated in a clearing adjacent to the parking area and is accessible to visitors. Several of the mounds, including Mound 2, were excavated by the National Park Service in 1964. The elongated Mound 2 is some 110 feet long by 60 feet wide and four feet high. Excavation revealed that it is actually three mounds in one: initially, two mounds were built side by side, then both were covered with more earth to create a single oblong, finished mound. The remains of 41 individuals were found in Mound 2, but, there were relatively few accompanying artifacts. Different pottery types found in separate areas of this compound mound indicate that it was constructed in two phases: the first episode during the Late Woodland period and the second, after a considerable length of time, during the Mississippian period. The site is located northeast of Jackson, Mississippi, on the Natchez Trace Parkway (milepost 106.9), approximately six miles east of the I-55 interchange. Open to the public daily, free of charge. 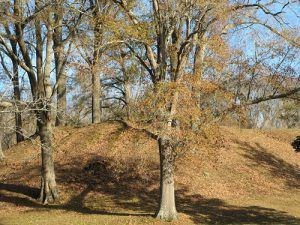 Pocahontas Site – This rectangular platform mound, 175 feet across at the base and about 22 feet high, was built and used during the Mississippian period, between 1000 and 1300 A.D. Remains of a mud-plastered log-post building have been found atop the mound. This structure was used as a ceremonial temple or as the residence of a chief. An extensive former village area surrounds the mound. The site has been incorporated into a roadside park. The site is located on U.S. Highway 49 at the town of Pocahontas, about nine miles north of the Jackson, interchange of U.S. 49 and I-220. Open to the public daily dawn to dusk, free of charge.

Emerald Mound – Designated a National Historic Landmark, Emerald Mound is one of the largest mounds in North America. Covering eight acres, Emerald Mound measures 770 by 435 feet at the base and is 35 feet high. The mound was built by depositing earth along the sides of a natural hill, thus reshaping it and creating an enormous artificial plateau. Two smaller mounds sit atop the expansive summit platform of the primary mound. The larger of the two, at the west end, measures 190 by 160 feet and is 30 feet high. Several additional smaller mounds were once located along the edges of the primary mound summit, but, were destroyed in the 19th century by plowing and erosion. Emerald Mound, built and used during the Mississippian period between 1250 and 1600 A.D., was a ceremonial center for the local population, which resided in outlying villages and hamlets. Its builders were ancestors of the Natchez Indians. By the late 1600s, the Natchez had abandoned Emerald Mound and established their capital at the Grand Village some 12 miles to the southwest. The site is located near Natchez Trace Parkway, about 10 miles northeast of Natchez, Mississippi (milepost 10.3). Exit parkway at the Route 553 intersection; follow signs to the mound, about one mile. Open to the public daily, free of charge.

7 thoughts on “Mound Builders of Mississippi”