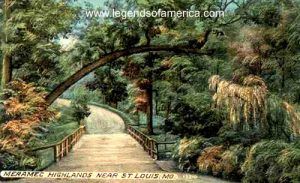 The Ghost of the Meramec – The Lynching of John Buckner

In January 1894, in Valley Park, Missouri, A black resident named John Buckner was taken from the authorities and hanged from the “Old Wagon Bridge” over the Meramec River. The story goes that he had sexually assaulted two black women and one white woman in the area. After a crime wave in the County of St. Louis, 150 citizens from the surrounding areas removed Buckner from the custody of local authorities, took him in the middle of the night to the main bridge in Valley Park, and lynched him.

The town was becoming a boom-town on its way “to rivaling its better-known neighbor of St. Louis –until a flood in 1915 pulled down the three-span steel bridge from its foundations. The nearby businesses burned to the ground after the electric plants had been flooded, and they never re-opened. Two Thousand people were left homeless and unemployed, and several drowned in the disaster. A new bridge was built and was pummeled again and again until it too was destroyed. Many locals say that a ghost haunts the Meramec River, and some have speculated that the spirit of the lynched John Buckner roams the Meramec where a new bridge (Highway 141) crosses over the spot of the lynching. They say his ghost longs for revenge on the town and is the continuing cause of the bad luck their town has endured.

Submitted by Joseph Wood, June 2005. Mr. Wood is the author of The Shadow of the Bridge. To learn more about this incident, please read his book. 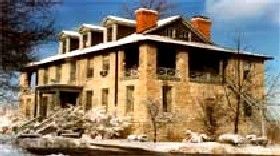 The Rock House at the Edgewood Children’s Center

Located in the southwest St. Louis suburb of Webster Groves sits the historic Edgewood Children’s Center. Today the center serves as a treatment center for abused and abandoned children; however, the center has a long history dating back almost 175 years.  In 1834, the St. Louis Association of Ladies for the Relief of Orphan Children was created for the many children left orphaned by the 1832 cholera epidemic. After expanding their facilities and services in 1848, the name was changed to the St. Louis Protestant Orphans’ Asylum.

In 1869, the group merged with the Western Sanitary Commission, a volunteer organization designed to provide relief for veterans of the Civil War. As a result of the merger, the group moved from its north St. Louis location to the Rock House in Webster Groves, initially the sight of Webster College School for Boys purchased by the Western Sanitary Commission in 1861.

The Rock House, sitting in the middle of the new 23-acre site, already had its own history. Constructed in 1850 by Reverend Artemus Bullard, the preacher successfully operated a seminary for young men in the Rock House until his untimely death in a train wreck in 1855. It is known that Reverend Bullard was a strong abolitionist, and it is believed that he used the Rock House as a way station in the Underground Railroad, helping to move slaves into safety in the north.   A tunnel, several blocks long, was believed to run beneath the Rock House, acting as a hiding place for slaves escaping to the north. The exit was sealed off in the 1890s after two children became lost in it and died.

In 1910, a devastating fire gutted the old Rock House, and at least one child perished in the fire. Though the interior was destroyed, the lovely stone exterior was not damaged.

Changing the name from St. Louis Protestant Orphan’s Asylum to Edgewood Children’s Center in 1944, the agency successfully bridged the transition from caring for homeless children to meeting the needs of emotionally disturbed children. Today the 155-year-old Rock house is listed as a National Historic Landmark and houses the Edgewood Center’s offices.

It comes as no surprise, with the center’s long history and the numerous children who have lived and died on these premises, that it is reportedly haunted. Many have claimed that they have seen the little girl’s ghost who perished at the Rock House fire in 1910. Said to be a friendly little spirit, the staff have fondly named her Rachel. Often the sounds of footsteps are heard in the hallways of the Rock House when no one is present. Furthermore, the footsteps are heard to continue up a staircase that stood almost a century ago but no longer exists today. Reports from adults who have lived on the second floor include moving objects, more phantom footfalls, and feelings of oppressive uneasiness.

Outside many have reported hearing the sounds of children playing on the grounds under an old cottonwood tree in the early evening hours. Some have even stated that they have seen a little girl under the tree, sometimes floating.