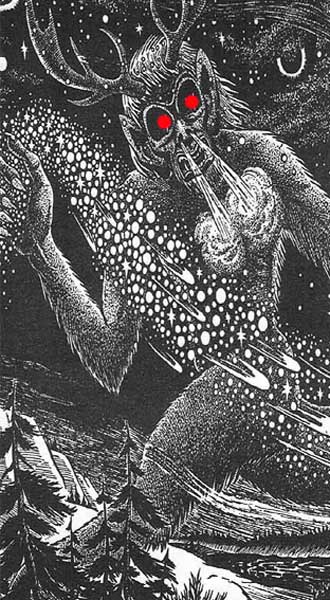 The Wendigo was gaunt to the point of emaciation; its desiccated skin pulled tautly over its bones. With its bones pushing out against its skin, its complexion the ash gray of death, and its eyes pushed back deep into their sockets; the Wendigo looked like a gaunt skeleton recently disinterred from the grave. What lips it had were tattered and bloody. Its body was unclean and suffering from suppurations of the flesh, giving off a strange and eerie odor of decay and decomposition, of death and corruption.

In Minnesota’s north woods, the forests of the Great Lake Region, and the central regions of Canada are said to live a malevolent being called a wendigo (also spelled windigo). This creature may appear as a monster with some human characteristics or as a spirit who has possessed a human being and made them monstrous. It is historically associated with cannibalism, murder, insatiable greed, and cultural taboos against such behaviors. Known by several names — Windigo, Witigo, Witiko, and Wee-Tee-Go — each roughly translates to “the evil spirit that devours mankind.”

This creature has long been known among the Algonquian Ojibwe, Eastern Cree, Saulteaux, Westmain Swampy Cree, Naskapi, and Innu peoples. They have described them as giants, many times larger than human beings. Although descriptions can vary somewhat, common to all these cultures is the view that the wendigo is a malevolent, cannibalistic, supernatural being strongly associated with winter, the north, coldness, famine, and starvation.

The Algonquian legend describes the creature as”

“a giant with a heart of ice; sometimes, it is thought to be entirely made of ice. Its body is skeletal and deformed, with missing lips and toes.”

The Ojibwa describe it:

“It was a large creature, as tall as a tree, with a lipless mouth and jagged teeth. Its breath was a strange hiss, its footprints full of blood, and it ate any man, woman, or child who ventured into its territory. And those were the lucky ones. Sometimes, the Wendigo chose to possess a person instead, and then the luckless individual became a Wendigo himself, hunting down those he had once loved and feasting upon their flesh.”

According to the legends, a Wendigo is created whenever a human resorts to cannibalism to survive. In the past, this occurred more often when Indians and settlers found themselves stranded in the bitter snows and ice of the north woods. Sometimes stranded for days, survivors might have felt compelled to cannibalize the dead to survive. Other versions of the legend cite that a Wendigo might also possess humans who displayed extreme greed, gluttony, and excess. Thus the myth served as a method of encouraging cooperation and moderation.

Native American versions of the creature spoke of a gigantic spirit over fifteen feet tall that had once been human but had been transformed into a creature by magic. Though the descriptions of the creature vary slightly, the Wendigo is generally said to have glowing eyes, long yellowed fangs, terrible claws, and overly long tongues. Sometimes they are described as having sallow, yellowish skin, and other times, they are covered with matted hair. The creature is said to have several skills and powers, including stealth, is a near-perfect hunter, knows and uses every inch of its territory, and can control the weather through dark magic. They are also portrayed as simultaneously gluttonous and emaciated from starvation.

Wendigos are said to be cursed to wander the land, eternally seeking to fulfill their voracious appetite for human flesh, and if there is nothing left to eat, it starves to death.

The legend lends its name to the disputed modern medical term Wendigo psychosis. Some psychiatrists consider it a syndrome that creates an intense craving for human flesh and a fear of becoming a cannibal. Ironically, this psychosis occurs in people living around the Great Lakes of Canada and the United States. Wendigo psychosis usually develops in the winter in individuals isolated by heavy snow for long periods. The initial symptoms are poor appetite, nausea, and vomiting. Subsequently, the individual develops a delusion of being transformed into a Wendigo monster. People who have Wendigo psychosis increasingly see others around them as being edible. At the same time, they have an exaggerated fear of becoming cannibals.

The most common response when a person showed signs of Wendigo psychosis was a curing attempt by traditional native healers. In past cases, if these attempts failed and the possessed person began to threaten those around them or to act violently or anti-socially, they were executed. There have been reports regarding this psychosis dating back hundreds of years.

“What caused us greater concern was the intelligence that met us upon entering the Lake, namely, that the men deputed by our Conductor to summon the Nations to the North Sea, and assigning them a rendezvous, where they were to await our coming, had met their death the previous Winter in a very strange manner. Those poor men (according to the report given us) were seized with an ailment unknown to us but not very unusual among the people we were seeking. They are afflicted with neither lunacy, hypochondria, nor frenzy; but have a combination of all these species of disease, which affects their imaginations and causes them a more than canine hunger. This makes them so ravenous for human flesh that they pounce upon women, children, and even upon men, like veritable werewolves, and devour them voraciously, without being able to appease or glut their appetite – ever seeking fresh prey, and the more greedily, the more they eat. This ailment attacked our deputies, and, as death is the sole remedy among those simple people for checking such acts of murder, they were slain in order to stay the course of their madness.”

Another documented case occurred in 1878 when a Plains Cree trapper from Alberta named Swift Runner suffered one of the worst cases. Swift Runner was a trader with the  Hudson’s Bay Company who was married and the father of six children. In 1875, he served as a guide for the North West Mounted Police.

During the winter of 1878-79, Swift Runner and his family were starving, along with numerous other Cree families. His eldest son was the first to die of starvation, and at some point, Swift Runner succumbed to Wendigo psychosis. Though emergency food supplies were available at Hudson’s Bay Company post some 25 miles away, he did not attempt to travel there. Instead, he killed the remaining members of his family and consumed them. He eventually confessed and was executed by authorities at Fort Saskatchewan.

A Wendigo allegedly made several appearances near Rosesu in Northern Minnesota from the late 1800s through the 1920s. Each time it was reported, an unexpected death followed, and finally, it was seen no more.

Another well-known case involving Wendigo psychosis was that of Jack Fiddler, an Oji-Cree chief and medicine man known for his powers at defeating wendigos. Fiddler claimed to have defeated 14 wendigos during his lifetime. Some of these creatures were said to have been sent by enemy shamans, and others were members of his band who had been taken with the insatiable, incurable desire to eat human flesh. In the latter case, family members usually asked Fiddler to kill a very sick loved one before they turned wendigo. Fiddler’s brother, Peter Flett, was killed after turning wendigo when the food ran out on a trading expedition. Hudson’s Bay Company traders, the Cree, and missionaries knew the Wendigo legend, though they often explained it as mental illness or superstition. Regardless, several incidents of people turning wendigo and eating human flesh are documented in the company’s records.

In 1907, the Canadian authorities arrested Fiddler and his brother Joseph for murder. Jack committed suicide, but Joseph was tried and sentenced to life in prison. He ultimately was granted a pardon but died three days later in jail before receiving the news of this pardon.

Among the Assiniboine, the Cree, and the Ojibwe, a satirical ceremonial dance is sometimes performed during famine to reinforce the seriousness of the wendigo taboo.

The frequency of Wendigo psychosis cases decreased sharply in the 20th century as the Native Americans came into greater and greater contact with Western ideologies.

However, Wendigo creature sightings are still reported, especially in northern Ontario, near the Cave of the Wendigo, and around Kenora, where traders have allegedly spotted it, trackers and trappers for decades. Many still believe that the Wendigo roams the woods and the prairies of northern Minnesota and Canada. Many have given Kenora, Ontario, Canada, the title of Wendigo Capital of the World. Sightings of the creature in this area have continued well into the new millennium.