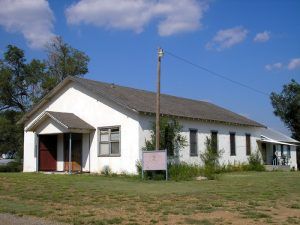 Lela, Texas, located on old Route 66, on the north side of I-40 in Wheeler County is a virtual ghost town today, with no open businesses, several abandoned and deteriorating buildings, and a very small population.

On the way to Lela from Shamrock on Route 66, a Rattle Snakes Exit Sign stood for decades near the Lela Exit in a pasture on the north side of I-40. However, in the Spring of 2007, high winds blew the Route 66 landmark down 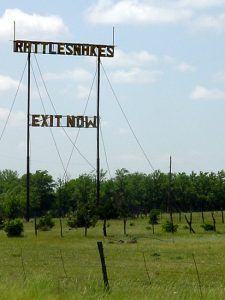 The long-standing exit sign for the old Regal Reptile Ranch was destroyed in 2007 by high winds. Photo from 2004.

The sign once advertised the exit for the Regal Reptile Ranch that was operated by Mike Allred, a carnival-like operator who once displayed snake attractions all along Route 66, in Elk City and Erick, Oklahoma, and Alanreed, Texas. The last and final “Reptile Ranch” was located in a service station at the Lela Exit. The station building was moved to McLean and now serves as part of the Red River Steakhouse.

Continuing on the north frontage road will bring Route 66 travelers to tiny Lela, Texas, once a thriving railroad town.

Established in 1902, Lela was originally called Story and served as a station on the Chicago, Rock Island and Gulf Railway. By the following year, the small settlement sported a school and a weekly newspaper called the Wheeler County Texan. That same year, it also gained a post office, as well as a postmaster, who changed the town’s name to Lela after his wife’s sister.

Although the community was founded because of its abundance of good underground water, it did not keep pace with Shamrock some five miles to the east and by 1920, many of the residents and businesses had moved to the larger town. 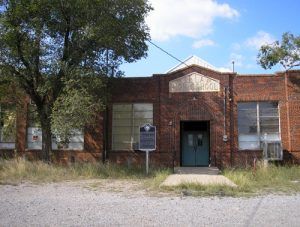 At about the same Long Dry Creek flooded and the town moved up the hill about a ½ mile from its original site. The discovery and production of natural gas brought renewed prosperity to this farming and cattle region in the 1920s and the community once again began to grow.

In 1927 the Lela School burned down and before long, construction began on a new brick school building that would be large enough to accommodate all grades for the increased population. However, from the 1930s on, Lela’s high school students attended school in Shamrock.

Another boost to Lela came from the establishment of Route 66, and soon the town sported a couple of combination gas station/general stores. But, it wouldn’t be enough. By 1947 Lela only had a population of 50 people, an elementary school, a church, and four businesses.

In 1992, the Lela School district closed and was annexed with Shamrock. In the 1970s Lela’s post office closed.

Today, the town has no open business but a number of residences continue to stand, many of which are abandoned and in disrepair. The Lela School still stands, fronted by a Texas Historical Marker as well as an old church. 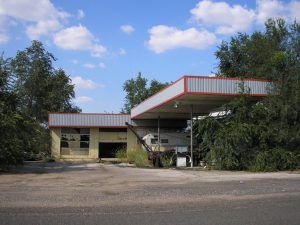 An old gas station in Lela, Texas by Kathy Weiser-Alexander.