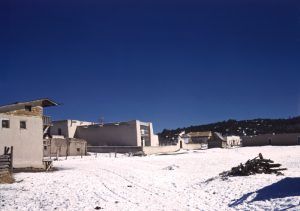 Las Trampas, New Mexico is a historic 18th-century village that is now a National Historic District, featuring at its center, the Spanish colonial San José de Gracia Church built between 1760 and 1776.

Las Trampas is one of a string of villages located on the scenic High Road (NM 76) between Santa Fe and Taos in the Sangre de Cristo Mountains. The community was first settled by 12 Spanish families from Santa Fe in 1751. Its primary purpose was to protect the village of Santa Cruz, about 17 miles to the southwest, from raids by the Ute, Comanche, and Apache Indians.

The village was originally built within a defensive wall, consisting of a central plaza, ringed by houses. The small villa’s layout helped protect its earliest inhabitants from Indian attacks. At that time, the nearest church was almost ten miles away at Picuris. By around 1760, the colonists began constructing the San José de Gracia Church. Built by the townspeople themselves, the church is in a typical Spanish-style, single nave plan, and is about 100 feet long. Its walls are made of a thick, plastered adobe. The church is a simple façade comprised of two flanking buttresses topped by wooden belfries. Inside is a simple wood-floored balcony, accessed via a ladder, which served as a choir loft above the main entrance. Wooden vigas (log beams) support the roof and gracefully rise over the main interior. Though simple in form, the nave was extensively decorated with paintings, most of which remain beautifully preserved today. 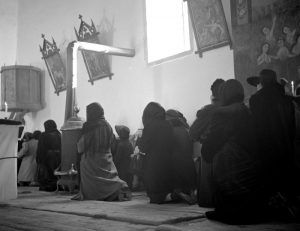 In spite of the odds, the residents managed to survive and flourish; by 1776 the original 12 families had grown to 63, with a total of 278 people living in the village. The people in that year were described as “a ragged lot…as festive as they [were] poor, and very merry.” They spoke “local Spanish” mingled with the Tanoan language of the Taos Pueblo and most spoke some words of the Comanche, Ute, and Apache languages

The tight-knit traditional community flourished and retained a culture little influenced by the outside world for decades. Some travelers on the long mountain road between Santa Fe and Taos visited Las Trampas, but otherwise, it remained relatively isolated. It was not until 1853, with the establishment of nearby Fort Burgwin, that the townspeople felt safe enough to begin constructing residences away from the main plaza. Still, throughout the late 19th and into the early 20th centuries, Las Trampas remained a completely secluded community, uninfluenced by popular American tastes and fashions. This cultural and economic isolation is largely responsible for protecting the Spanish heritage that still permeates the community today. 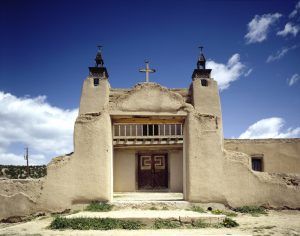 The original plaza plan of Las Trampas is still extant in the small village, though the buildings that currently sit on the square likely date from the 1850s or later. No remains of the surrounding defensive wall are visible. Today, the San José de Gracia Church, one of the most original and best-preserved examples of Spanish Colonial architecture in New Mexico.

The church still retains most of its original 18th-century features with its wide-plank wooden floors, decorative interior, and strong adobe walls that have been preserved and continually re-plastered. The unique and original transverse clerestory window in the nave casts light on the sanctuary and altar, which is otherwise still lit by candles. Such clerestory windows are unknown elsewhere in Spanish Colonial architecture or in Christian architecture anywhere in the world. They were likely an invention of the Franciscan padres of New Mexico, and the church at Las Trampas has a beautiful example. In the walled forecourt of the church is the cemetery, the final resting place of the people of Las Trampas for generations. San José de Gracia is still an active parish church and is regularly open to visitors on the weekends.

Today the San José de Gracia Church is a National Historic Landmark. The district and its church are located in Las Trampas, off Route 76, roughly 30 miles south of Taos, New Mexico. 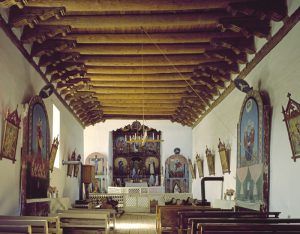