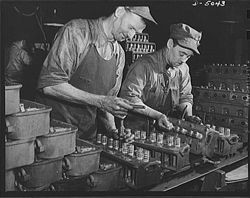 If asked to compose a list of the ten men most responsible for the development of the American automobile industry, who would you include? Would Henry Ford, David Buick, Walter Chrysler, Ransom Olds, Benjamin Briscoe, and Charles Nash make that list? Would it include A.W. Tobin and Ross Judson, two men who laid many of the industry’s foundational stones?

Tobin and Judson, in the first decades of the 21st century, may be less than an obscure footnote to automotive history but the business they created provided a staggering number of famous and forgotten manufacturers with a rock-solid foundation upon which to build. In addition, it also served as an integral component in the development of the fledgling American aeronautical industry.

The establishment of the Tobin and Judson automotive empire can be traced to 1901 when Ross Judson, a gifted mechanical engineering student, examined a Mercedes L-head four-cylinder engine and noticed a number of inherent flaws. Following on the heels of this discovery was the conviction that he could resolve these issues and vastly improve that engine.

In 1902, almost immediately after graduation from the Armour Institute of Technology, Judson drafted a sales pitch that he presented to his brother-in-law, A.W. Tobin. His enthusiasm for the project presented against the background of a developing gold rush atmosphere that was the auto industry carried the day and Judson soon had a partner in Tobin, a $2,000 investment of capital from his partner, a hayloft converted to a machine shop in Chicago, and a company named Autocar.

Judson promoted his first engine with an eye-catching display that debuted at the 1903 Chicago Automobile Show. Obviously, to display their product at such a prestigious event Judson and Tobin must have had high expectations from this endeavor but the inundation of orders left them overwhelmed and ill-prepared.

To fill these initial orders the company launched full-scale production simultaneously with the expansion of their fledgling facilities. By 1904, resultant of the exponential increase in orders, Judson and Tobin found themselves in the enviable position of needing to find a location suitable for dramatic expansion.

Numerous communities and municipalities were offering prospective automotive manufacturers a wide array of incentives in exchange for the establishment of manufacturing facilities. The automotive industry was fast becoming a cash creation dynamo and every town wanted its share of the pie.

Judson and Tobin evaluated a number of communities before allowing themselves to be wooed by the incentive package offered by Muskegon, Michigan, which resulted in the relocation of Autocar operations and the construction of a state-of-the-art, 16,000 square foot factory in that city in 1905. The following year the company experienced equally dramatic changes; Studebaker increased its order from 100 engines to 1,000, the discovery that a company in Ardmore, Pennsylvania had used the name Autocar since 1899 led to reorganization under the Continental name, production of a wide array of stationary engines commenced, and the number of employees increased from 25 to almost 600.

One year later the company expanded operations to include an aircraft engine production and development division. This division, as with the rest of the company, would evolve with the rapidly changing technological innovations spurred by the automobile industry, and in 1929; it would become a subsidiary, Continental Aircraft Engine with the A-70, a 170 horsepower radial engine, as the foundation.

Receipt of an order for 10,000 engines by a new automotive manufacturing concern, Hudson, in late 1910, provided the funding for Continental to launch an ambitious expansion program that included expansion to the Muskegon facility, construction of a factory in Detroit, and the outfitting of both factories with state of the art equipment. 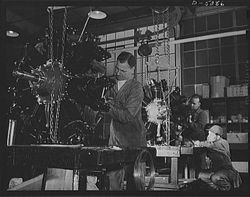 Two years later Walter Frederick, a former engineer for the truck manufacturing concern Autocar, assumed Judson’s position as chief engineer. Utilizing his extensive experience and knowledge, the company expanded the engineering department and launched the development of an innovative program that included the manufacture of standardized engines for catalog sales to automobile manufacturers, companies in need of stationary industrial engines, aircraft firms, or tractor manufacturers.

Additionally, the company offered various options for these engines. As a result, if a client requested engine specifications not listed in the catalog, staff engineers modified existing models accordingly.

The next two decades were a golden era for Continental. Automobiles manufactured by Apperson and Case, Crawford and Jordan, Ace and Vellie, Durant, including Star, and Erskine, and dozens of other companies utilized engines by Continental. Numerous companies that manufactured trucks exclusively including Corbitt, Federal, Schacht, Selden, Sterling, and Reo (derived from the initials of the founder, Ransom E. Olds) used their engines as well.

The 1920s was another pivotal period of transition for the company. W.R. Angell, a member of the companies’ board of directors, finalized an agreement with William Durant, the founder of General Motors who was building a similar company, to supply engines for his new line of automobiles – Durant, Star, and Flint. During the same period tentative merger negotiations initiated between Continental and three manufacturers that utilized that company’s products, Peerless, Moon, and Jordan that had the potential for making a tremendous impact on the American automobile industry, collapsed in the initial stage of development.

The dawn of a new decade at Continental began with the retirement of Ross Judson and the rise of W.R. Angell to the presidency of the company. His expansion of the diesel truck, aircraft, and agricultural engine divisions of the company kept it afloat during the tumultuous days of the Great Depression. However, at the same time his decision to initiate the launch of a Continental manufactured automobile, and the purchase of a truck manufacturing enterprise, Divco, brought the company to the brink of financial ruin.

Together, the short-lived Continental Beacon, Flyer, and Ace, in actuality little more than new emblems on the equally short-lived De Vaux, and the acquisition of Divco in 1932 resulted in the companies first financial crisis.

The diverse legacy of Continental did not end with the Great Depression or the post-war era of unprecedented optimism. Continental engines powered the grandfather of the Jeep, the Bantam Reconnaissance and Command Car prototype, and the iconic Checker taxi through early 1964. Then there are the contributions of the reincarnated Continental, Ryan Aeronautical, and Teledyne Continental Motors, a fitting legacy of two forgotten pioneers, Tobin and Judson.