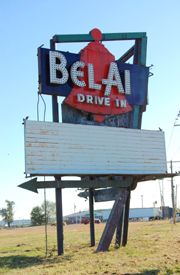 Belair Drive-In, Mitchell, Illinois. We heard it was removed in 2018 to make way for a gas station.

As you near the town of Mitchell, you will begin to notice that you have left the quiet farms of southern Illinois and are entering the suburbs of St. Louis. However, here on the sprawling metropolitan city’s outskirts, you will still find numerous peeks of the old Mother Road.

When Mitchell got its start, most of the area was sparsely settled by hard-working German farmers, who planted wheat, oats, corn, potatoes, and hay. Two of these settlers were James Gillham and Andrew Emmert, who would figure prominently in the early history of this part of southwestern Illinois.

The community of Mitchell got its start when two brothers from Chicago — John Jay and William H. Mitchell, moved to the area to operate a cattle ranch in 1870. Purchasing some 4,000 acres, they found most of the land was unsuitable for cattle or farming as it was too swampy. Not to be deterred, they drained the land and began their operation.

At about the same time, the Chicago & Alton Railroad made plans to lay tracks from Alton to East St. Louis. John Mitchell promoted the construction of the railroad and established Mitchell Station, naming it for himself. The brothers also laid out a townsite, donating land for two churches and a one-room school. Of the churches, one became the Presbyterian Church, the other — the St. Elizabeth Catholic Church.

Over the next several years, more railroads, including the Wabash, laid their tracks through the area, which quickly became a busy center for rail transportation. In the 1882 history of Madison County, Mitchell is described as having two general stores, one owned by Hinze & Krueger and the other by Henry Reinemann; a blacksmith shop and a grocery store owned by Henry Quinn; and a meat market owned by A. Rapp. When the town gained a post office, Robert Krueger became the postmaster. Another important early settler was a doctor named  D. E. Smalley.

After the turn of the century, many other railroad companies operated in the Mitchell area, and some built rail yards. The railroad industry attracted many workers from Kentucky and Tennessee, some of whom stayed at the two boardinghouses in the area, one owned by a woman named Mrs. Whyer and the other by a Mrs. Netheringham. During this era, the community also sported two grocery stores, a saloon, a blacksmith shop, two hotels, a garage, and several restaurants.

When Route 66 was created, it ran right through Mitchell, creating yet more businesses, one of which was the Luna Café, built in 1924. Always a small town, Mitchell was never incorporated. Today it is called home to about 1,400 people. It is located at the junction of Interstate 270 and Illinois Route 203, part of former U.S. Highway 66. 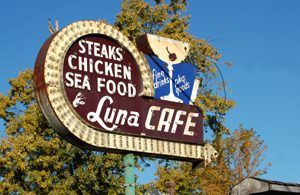 Beyond the Bel-Air, you will pass several old motels on the left before coming to a Route 66 classic – the Luna Café. The “café” was said to also host a gambling operation in the basement and provided “ladies of ill-repute” upstairs. According to local legend, if the cherry in the martini glass on the neon sign was lit, the ladies upstairs were open for business. Like many other places along Illinois’ ribbon of the Mother Road, the café was once said to have been visited often by Al Capone and a host of other mobsters. At one time, the café was a “fine dining establishment” and so expensive that most law-abiding citizens couldn’t afford to eat there. The original building sported an enormous neon moon was on the top of the building; however, it was taken down and destroyed when the building was re-roofed.

With help from Friends of the Mother Road, the neon moon sign has been restored to its former luster. After almost nine decades, the Luna Café is still in business. Today, it is more of a working persons’ establishment, catering to the locals and a new generation of Route 66 travelers.

Beyond the Luna Café, old Route 66 split, with one alignment headed into the central city of St. Louis via Granite City, Madison, and Venice. This alignment, most often referred to as City 66, then passes through some “seedy” and confusing neighborhoods in East St. Louis, which today is a rough part of town that you might want to avoid. 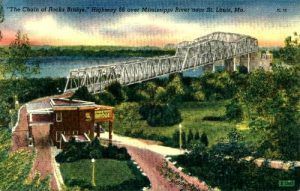 The other alignment, referred to as the Beltline Route, used to cross the Mississippi River via the old Chain of Rocks Bridge. The bridge, constructed in 1929, was financed by tolls. In 1967, a new bridge along I-270 was constructed over the river, and the old bridge was closed. After sitting abandoned for more than three decades, it was restored and is now the longest strolling and biking bridge in the world. This alignment passed through the north edge of the city, then turned south through Kirkwood, rejoining City 66 at a point 26 miles from the Chain of Rocks Bridge. Today, Route 66 dead-ends at the Chain of Rocks Bridge, where you will have to backtrack to the new overpass on I-270 to continue your journey along the Mother Road.

In St. Louis, you can reconnect back to Route 66 by exiting in downtown St. Louis and traveling along Tucker Boulevard. This way, you won’t miss some of the city’s fascinating sites such as the Gateway Arch, historic Union Station, and the famous Route 66 icon – Ted Drewes, as you begin to move on into the suburbs.

Welcome to Missouri! Enjoy the sites and flavors of the Show-Me State! 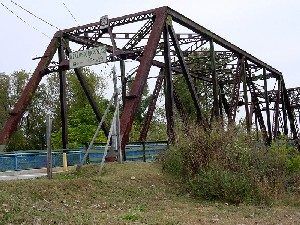