Brassy tunes and the din of clanking glasses fill the air of a steamy 1920s Chicago, Illinois ballroom. Faces streak in and out of view in a sea of bodies washed over with the Charleston, the Black Bottom, and the Shimmy. Amid them, the rosy-cheeked complexion of a young 20-something Flapper girl is glimpsed as she strides into the night past bristling guards shoving a dapper man out of the front door.

Her beauty leaves an impression in the dimness of the streetlamps. Smooth features, bobbed brunette hair and an extravagant flapper dress are keen attributes as she rounds the corner. 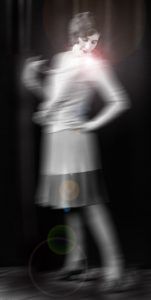 She vanishes into obscurity, giving one backward glance before hitching a ride down Des Plaines Avenue in a clambering automobile. Or so the imagery surrounding the legendary “Flapper Ghost” of Chicago would lead us to believe in our most fantastical imaginings.

At 1800 South Harlem Avenue, our fabled Flapper is reported to reenter the scene.¹ That’s Jewish Waldheim Cemetery in suburban Forest Park, her stated stomping grounds for a century of spotty sightings to follow.

Of course, by now, our fair lady is quite dead – a legendary regional ghost of Chicago. Yet like many legendary specters from a romanticized time and place, the “Flapper Ghost” story takes a nearly formulaic narrative turn. Consider the account documented by Troy Taylor, author of Haunted Illinois: Ghosts and Strange Phenomena of the Prairie State and owner of PrairieGhosts.com:

“This fetching phantom has been known to hitch rides on Des Plaines Avenue and most often has been seen near the cemetery gates… In the years before World War II, she was often reported at the Melody Mill Ballroom, where she would dance with young men and often ask for a ride home. After they drove her to the cemetery, the girl would explain that she lived in the caretaker’s house (since demolished) and then get out of the car. Often with her admirers in pursuit, she would then run out into the cemetery and vanish among the tombstones.”

The notion of a hitchhiking flapper ghost is romantic and rich with nearly unmistakable urban legend motifs. Ignoring the notion of a hitchhiking Flapper Ghost in America’s most infamous city for gangsters, speakeasies, and all-around 1920s Tom Foolery is admittedly difficult. Not to mention, it clearly mirrors the “Vanishing Hitchhiker” urban legend quite closely, which certainly should not be undermined. In short, it has the earmarking of a regional urban legend that varies depending on the teller.

Nonetheless, there is a second set of speculation that is easier to ignore for unmovable skeptics in the case of the Flapper Ghost: that the reports surrounding her could indeed be based on some truth.

Could the ‘behavior’ of the alleged Flapper Ghost give us a glimpse into her possible origins? There are essentially two paths to take here. 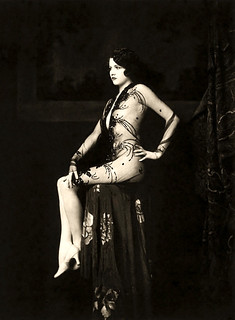 On the one hand, we can think of her as an archetypal picture of the Roaring Twenties and thus, a nice addition to a rich cultural heritage. The inherent ‘spooky’ qualities certainly help to spread the story, and in this scenario, the origins of the Flapper Ghost are just that – a story or urban legend. For many, the tale ends here.

A reported belief by nearly one-third of the population is hard to slough off in any situation, and while certainly, the number of people who would believe in a hitchhiking ghost off-hand is probably fewer, the case is still worth some examination.

For the 32-percenters out there attempting to trace the Flapper Ghost’s origins, prevailing theories on the ‘nature of ghosts reveal a few basic assumptions that are employable. Ghost theory often states that Earth-bound spirits emulate an impactful life event from beyond the grave or even the very moment of death itself. In so doing, they often resemble a moment in time where they either died or experienced a life-altering event.

They are sometimes theorized to emulate those moments in the rare instance that they become full-bodied apparitions and materialize. There is a ring of rationality there, that if you’ve accepted the assumption that ghosts exist at all, and if someone died in a way or experienced something so traumatic that it prevented them from moving on to the other side; they might reassume that moment in their “trapped” state.

The theory is so engrained in the ghost community, after weighing the evidence and accepting the assumptions, not much more needs to be said on this side of the debate.

The conclusion given the above logic would thus be that this young woman met an untimely death, probably after a night at the “ballroom” in her fabled Flapper dress, and thus, when seen today as an apparition, reassumes that form.

That is, of course, speculation and one’s gut instinct when considering the nature of the sightings. Yet by sifting through the handful of documented eyewitness accounts of the Flapper Ghost, another story quickly emerges. 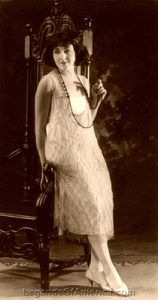 According to Taylor, the Flapper Ghost was most active during the Century of Progress Exhibition in 1933, in the years leading up to WWII, and again, in 1973.

In this case, Taylor places her possible point of origin as a Melody Mill regular that eventually “died of peritonitis, the result of a burst appendix.” As legend has it, the same girl was buried at Jewish Waldheim, which then brings the point of origin full circle.

Under this account, our fabled flapper in the fantastical lead of this article was actually driving off to the safety of her home until, at last, a medical malady claimed her. In the end, if this is her accepted point of origin, we can only assume her restless spirit returns to spend time with the living in a place she was happiest. (That is a comforting idea that goes cross-current given your usual horror ghost story.)

Upon her passing, staff members at Melody Mill reported seeing the young woman in the ballroom. Taylor writes: “A number of men actually claimed to have met the girl there, after her death, and offered her a ride home. During the journey, the young woman always vanished.”

During the Century of Progress in 1933, she was again active at the ballroom in much the manner explained above. One account relayed by Taylor even places a young man back at the caretaker’s house the day after his initial encounter with the mysterious woman.

“He had become infatuated with her,” writes Taylor, “and hoped to take her dancing again another evening. His questions to the occupants of the house were met with blank stares and bafflement. No such girl lived, or had ever lived, at the house.” (Based on the timeline, we can naturally assume that this was before the caretaker’s house was demolished.)

Other accounts by Taylor include a daytime sighting in the early 1970s by a family visiting the cemetery. In this account, the family reported seeing a woman dressed like a flapper disappearing as she walked toward a crypt. Following the destruction of the Melody Mill, after it was closed in 1985, the accounts generally fizzled out, perhaps, as Taylor put it, because the spirit had “moved on” following the removal of her main haunt.

Tangled into the story of our Flapper Ghost are two other legendary hitchhiking ghosts native to Chicago – “Resurrection Mary” and the vanishing little girl on the CTA bus in Evergreen Park.² Each surely fits into the same puzzle, or should at least be mentioned in the same story, given their obvious affinities and the general tendency of storytelling to spur offshoots with time.

Chicago Haunts: Ghostlore of the Windy City by Ursula Bielski places the sightings of Resurrection Mary at the intersection of Cline and Fifth Avenues near the Calumet River. By this account, she is often seen as a Woman in White, yet another obvious motif or archetype that is hard to ignore. According to Adam Selzer in The Ghosts of Chicago: The Windy City’s Most Famous Haunts, the little girl reported on CTA buses in suburban Evergreen Park is usually glimpsed around 95th street.

The Resurrection Cemetery in Justice, made famous by the story of Resurrection Mary. Photo courtesy Wikipedia

With more than one legendary vanishing hitchhiker in the region, one must stop and wonder whether these cases are related, the same, or well-engrained motifs in local ghost lore.

Fortunately, there are some major differences to consider that separate the accounts, either proving that the story deviated at some point into separate paths, or they were indeed separate occurrences from the start.

Let’s first consider the general description of Resurrection Mary in the words of Selzer in search of similarities and differences.

“Some have described giving Mary a ride home, only to have her jump from the car and run-up to the gates of the cemetery and vanish… but more often, she’s said to vanish out of the car altogether, leading the confused driver to run into the nearby tavern, Chet’s Melody Lounge, to tell his story.”

Later on, in the footnotes of the same passage, Selzer reveals another interesting anecdote about our Flapper: “The flapper is usually said to look for rides at the old Melody Mill club…but my investigation indicates that the Waldheim flapper and the Melody Mill hitchhiker probably weren’t the same ghost; surviving accounts of the Melody Mill story say their hitcher went to Wood Lawn Cemetery, not Waldheim.”

With all of the cases on the table, it’s a lot to digest. Clearly, multiple stories are happening at once under different names, and then even within the established cases of the Flapper Girl and Resurrection Mary, there are yet more variants to untangle.

At the end of the day, there are enough inherent similarities between the Waldheim ghost, the Wood Lawn Cemetery ghost, and Resurrection Mary that ignoring them would be negligible. Yet the differences – vanishing from the car versus running up to the graveyard (Mary versus the flapper), deviations in where they are picked up (Mary versus CTA versus Flapper), taking drivers to Waldheim versus Wood Lawn (variants of the Flapper) and also physical descriptions of a brunette Flapper girl versus a (sometimes) blonde Woman in White – are also hard to discount.

Selzer does throw the same caution to the wind, noticing the obvious folkloric undercurrents by pointing to a 1942 California Folklore Quarterly article written by Richard Beardsley and Rosalie Hankey that identifies the central motifs and variations to the “vanishing hitchhiker” narrative (see page 183 of his book). Here he is speaking to Resurrection Mary and ultimately admits that she doesn’t “fit into these categories very well.”

In all instances, there is enough evidence drawing the accounts together and pulling them apart that it is easy to argue on either side of the fence. Certainly, a short article is no place to weigh all of the evidence as there are enough accounts and evidence to fill dozens of books on the subject (which others well-versed on the subject certainly have).

Nonetheless, the stories are each compelling enough to last the test of time and continue along, thanks to the right mix of occasional eyewitness testimony, historical testimony, and a general ‘creep-factor to stay relevant when discussing Chicago ghosts.

The Roaring Twenties are earmarked by tumultuous cultural change and the shedding of generations-old moral and cultural norms in the aftershock of WWI. With our men at arms coming home in lockstep with war-hardened women in stride, the “Bright Young Things” of the 1920s left a searing mark on the collective memory of America as their dress, customs, wild appetite for partying, and blatant disregard for gender stereotypes shattered imposed boundaries to pieces.

Perhaps, in the end, this helps to explain the continued interest surrounding the Flapper Ghost and the mystery that defines her.

Ghosts of the Rialto Theatre in Joliet

About the Author: Marlon Heimerl is a writer and paranormal researcher for HalloweenCostumes.com.

1. Chicago’s Other Vanishing Hitchhikers! The Flapper Ghost & Others!