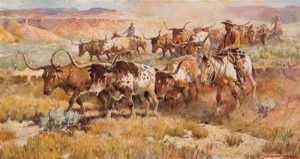 Hugh Anderson was the son of a wealthy Bell County, Texas cattleman; Anderson followed in his father’s footsteps, becoming a cowboy and driving the herds up the Texas Trails to Kansas. Though he came from a good family, he was prone to running with a rough crowd, and in 1871, this would become extremely evident. While working on a trail drive bound for Newton, Kansas, he allegedly helped John Wesley Hardin track down a man named Juan Bideno, who had killed a friend of Hardin’s. When Bideno was found in Bluff City, Kansas, Hardin shot him.

By August 1871, the cowboys arrived in Newton, where one of Anderson’s friends, Bill Bailey, was shot and killed by another man named Mike McCluskie. On the evening of August 19, 1871, Anderson confronted McCluskie in Tuttle’s Dance Hall. He shot him, which instigated one of the largest gunfights in the Old West – the Hyde Park Gunfight, also known as the Newton Massacre, which left several dead and wounded in its wake. In the melee, Anderson took two shots to his leg but would survive. Though a warrant was issued for Anderson’s arrest, he was smuggled out of town by his father and friends.

Anderson then returned to Texas to recover from his wounds. In the meantime, Arthur McCluskie, Mike’s brother, wanted revenge against Hugh Anderson, and for the next two years, Arthur and his friends kept a lookout for Anderson. Then, in 1873, Anderson made the mistake of returning to Kansas, working as a bartender at Harding’s Trading Post in Medicine Lodge. Arthur McCluskie soon tracked him down, and on July 4, 1873, he sent a man into the trading post to invite Anderson to a duel. Giving Anderson a choice of weapons — either guns or knives, Anderson chose pistols and soon emerged from the trading post. In a fierce duel, both men emptied their guns into each other but, amazingly were still alive. They then resorted to knives, and in the end, both were dead.