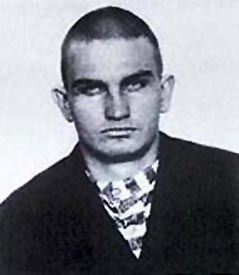 Harry Tracy was an Old West Outlaw who committed crimes in Colorado, Utah, Oregon, and Washington.

He was born in Wisconsin in about 1874, and his real name was Harry Severns. At a young age, he ran away from home, landing in Chicago, Illinois, where he worked in the stockyards. Later, he migrated to Colorado, where he labored in the goldfields before moving to Billings, Montana, and learning the cowboy trade.

However, it appears that Tracy was more interested in making his way more easily — rustling cattle. After killing a deputy sheriff named Arly Grimes, he fled back to Colorado, where he reportedly killed two more men.

He soon hooked up with Butch Cassidy and the Wild Bunch, again rustling cattle and committing highway robbery. In 1898 after the gang killed a boy named William Strong during a robbery, the Wild Bunch was aggressively pursued, and when a gunfight erupted, posseman Valentine Hoy was killed. Tracy and three other men were arrested, but Tracy escaped an Aspen, Colorado jail by nearly killing a guard with a lead pipe. 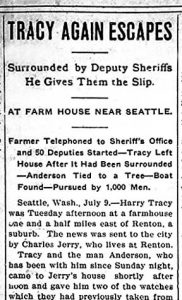 He then made his way to Portland, Oregon, where he hooked up with an outlaw named Dave Merrill and continued his life of crime. Both men were arrested again in February 1899, and Tracy was sentenced to 20 years in the Salem, Oregon penitentiary. Merrill was also sent up. However, on June 9, 1902, with the help of a female accomplice, Tracy and Merrill escaped the prison, killing three men and wounding another in the process. With the two on the lamb, Tracy felt Merrill was becoming weak and killed him on June 28 near Chehalis, Washington. Continuing on his own, he made his way to the Seattle area, where he killed Detective Charles Raymond and a deputy named John Williams during a shootout on July 3.

Fleeing once again, the killer was pursued to a ranch southeast of Creston, Washington, where a gunfight occurred on August 6. In the melee, Tracy killed posse members, Cornelious Rowley and Enoch Breece. However, the cornered outlaw took a shot in the leg. Surrounded by authorities and unable to escape this time, Tracy committed suicide rather than being captured.

“In all the criminal lore of the country there is no record equal to that of Harry Tracy for cold-blooded nerve, desperation, and thirst for crime. Jesse James, compared with Tracy, is a Sunday school teacher.”