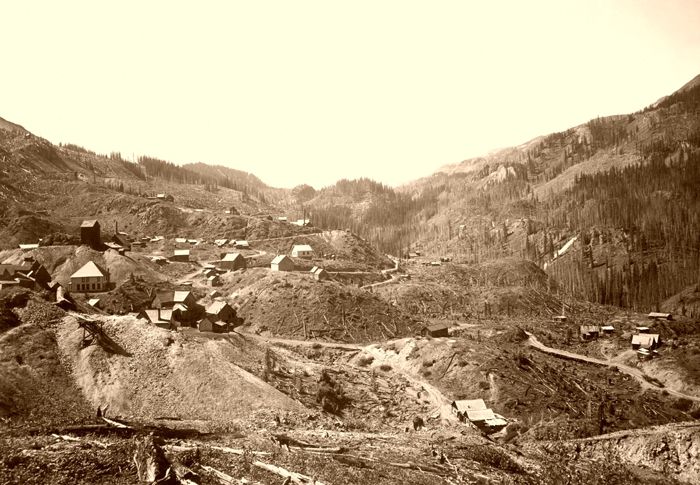 Guston, Colorado from north of the Robinson Mine, looking south, 1900.

One of the many towns of the Red Mountain Mining District, Guston, Colorado, was located at Champion Gulch’s foot on the Silverton Railroad line. The mining camp began as a scattering of buildings around several mines, including the Guston, Robinson, Genessee, Vanderbilt, and the famous Yankee Girl.

The first ore was found in the summer of 1881 by prospectors John Robinson, A. Meldrum, A.E. Long, and A. Deitlaf. They called their claim the Guston Mine but felt the ore at the surface was not of sufficient value to warrant shipping to market. That changed the next year when D.C. Hartwell, an agent for the Pueblo Smelting and Refining Company in Ouray, convinced them to develop the Guston.

In August 1882, when John Robinson was hunting game in the valley below Red Mountain Pass, he found a large chunk of lead and silver ore just about 300 yards from the Guston Mine. Along with several partners, he soon made claims on the Robinson, Yankee Girl, and Orphan Boy Mines.

The partners quickly dug out 4,500 pounds of ore and took it to Ouray by pack train to a smelter. The ore yielded 88 ounces of silver per ton. Just a month later, when the Yankee Girl shaft had only been dug about 20 feet deep, the partners sold it for $125,000 (worth more than $3 million today) and used their profits to finance the development of their other claims. The Orphan Boy and Robinson Mines would become good silver producers, but the Yankee Girl would wind up generating more profitable ores and for a longer period of time. 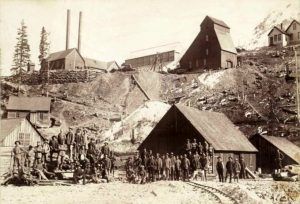 The Yankee Girl quickly drew public attention, and the boom began in the Red Mountain District.

The Genessee Mine was also discovered in 1882 by Jasper Brown and Adelbert Parsell, which would later merge with the Vanderbilt mine in 1889.

A camp formed around the mines, and the name of Missouri City was proposed in 1883. Instead, the camp was called Guston after the first mine in the district. An official town was never laid out, nor was there ever a defined business district. Instead, the businesses and homes were built wherever there was empty space.

In 1883, the Yankee Girl was joined with the Robinson and Orphan Boy mines by interconnecting tunnels. Eventually, these tunnels reached a length of 25 miles. A boarding house was constructed at the Yankee Girl for all of the miners.

In August 1884, T.E. Schwarts, a prominent mining engineer, became the superintendent of the Yankee Girl Mine, which at that time had only been opened to a depth of 100 feet. During the next five years, he would develop it to a depth of about 1,000 feet, erected a large hoisting plant, and made surface improvements. Under his direction, the mine became so profitable that the company could pay dividends amounting to nearly $1,000,000. He was also able to develop the adjoining Robinson Mine to the point of productiveness. In 1888, he also began to manage the Guston Mine and made it productive, operating with a net profit of $400,000 while he was in charge. 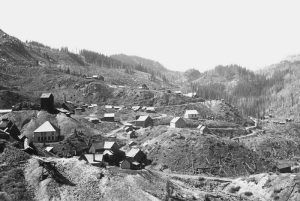 With this increased productivity, the Guston mining camp grew to a population of about 300 and boasted most of the amenities of a burgeoning town, including a schoolhouse.

During this time, the Yankee Girl Mine produced 10 tons of ore each day, and a train of 75 mules carried 250 pounds of ore south to the railroad in Silverton.

In 1889, Silverton Railroad was completed from Silverton over Red Mountain Pass through Red Mountain Town, Guston, and Ironton. The railroad dramatically reduced the shipping costs of the ore, making the mines more profitable. A depot was built here, and though it was little more than a small passenger shelter, it was the only depot on Red Mountain.

In the summer of 1891, the Home Missionary Board of the Congregational Church sent the Reverend William Davis from Denver to the Red Mountain District to establish a house of worship. Davis first traveled to Red Mountain Town, the largest community in the district. However, the residents had no interest in a church, primarily because the saloon and brothel-owners thought it would be bad for business.

However, when Reverend Davis approached Guston’s mining camp about a mile north, he got a different response. He was welcomed, and one of the mine owners gave him a small plot of land to build a church and a cabin for his family. The community pitched in, raising $300 for the church, and lumber was donated. Davis, who had been a carpenter in his younger years, built the church along with area residents. The church opened in 1892, and on the very day that it was dedicated, the business district at Red Mountain Town burned to the ground, which prompted Reverend Davis to say: “You can’t fight God and prosper.” 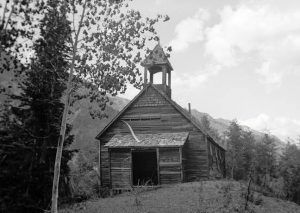 In the beginning, the church didn’t have a bell, so the mining company piped compressed air to a whistle placed in a little cupola. Later, the miners insisted on a bell and raised the money, so a belfry was added to the small church. It was the only church established in the Red Mountain Mining District. The small church survived several fires and was still standing in 1945, but all traces are gone today.

Though the “town” of Guston had the usual amenities, one thing it didn’t have for many years was a post office. It finally gained one on January 26th, 1892. But, it would be a little too late for the community, as it almost immediately began to decline just a year later with the Silver Panic of 1893. At this time, most of the mines were closed, and others consolidated as other metals were mined. Guston’s post office closed in November 1898.

Ironically, mining activity picked up again in 1898, when gold was discovered in nearly the same ores as the silver, and many of the mines, including the Yankee Girl, American Girl, Colorado Boy, Treasury, Genessee-Vanderbilt, and others, were re-opened. Some of these mines did well for the next few decades, but Guston’s mining camp was already abandoned. 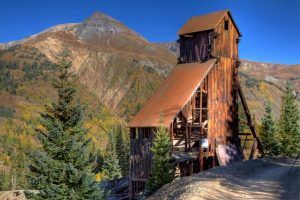 In 1904, the Joker Tunnel project undercut the Genessee-Vanderbilt, Yankee Girl, Robinson, and Guston mines. By 1907, the tunnel was nearly a mile long and intersected the mine workings 600 feet below the surface. The tunnel drained the mines of the water that had caused their closure. This last-ditch effort continued to produce ore until 1914, when the tunnel was closed.

The old town and its mines are located about 11 miles south of Ouray. They can be seen along County Road 31, off of the Million Dollar Highway (U.S. 550), as it winds its way through the Red Mountain Mining District. 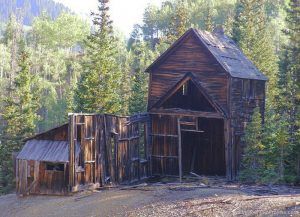