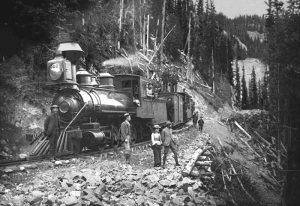 The Silverton Railroad was a narrow-gauge line from Silverton, Colorado, that was built over the 11,018-foot Red Mountain Pass to the mining camps of the Red Mountain Mining District.

A mining boom began in 1882 when the Robinson, Yankee Girl, and Orphan Boy Mines were found near Guston. For many years, the ore was hauled out on the backs of burros, but more economical transportation was badly needed. A railroad would dramatically cut these costs by transporting the ore to Silverton and connecting with the Denver & Rio Grande Railroad for shipment to Durango’s smelters.

The Silverton Railroad was popularly known as the Rainbow Route, a name coined by Mears’ friend David F. Day, the Solid Muldoon newspaper publisher in Ouray.

Early on, Otto Mears enlisted the help of Charles W. Gibbs, a railroad engineer with many years of experience. Gibbs was known for his daring engineering and solutions to difficult problems, such as the steep, mountainous terrain of the Chattanooga Loop, the depot in a wye at Red Mountain Town, and a covered turntable on the main track at Corkscrew Gulch.

Following a route originally surveyed by the Denver & Rio Grande Railroad, the three-foot narrow gauge track made its way to the Burro Bridge in November 1887. Construction was then halted for the winter. Construction resumed in the spring, and Red Mountain Town was reached by September 1888. It reached Ironton in mid-1889 and was completed to its terminus at Albany in September. Though the owners wanted to connect with Ouray and the Denver and Rio Grande Railroad, the grade was insurmountable.

Once the railroad was completed, the mines in the Red Mountain District were shipping 20,000 to 25,000 tons of ore out and 15,000 tons of coal and materials in, making a handsome profit for the railroad.

Due to the harsh winters in the San Juan Mountains, the railroad didn’t operate from February to mid-May. At this time, the miners stockpiled ore. 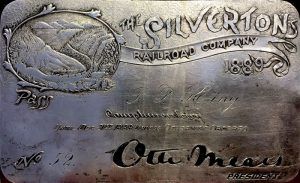 By 1888, business was so good that Mears began to issue special passes to a select few patrons whose influence was sought in the railroads’ favor. In 1888 the passes were printed on buckskin, in 1889 were of stamped silver, and the 1890 passes were watch fobs. None were issued in 1891, but in 1892, the passes good on both Mear’s Silverton and Rio Grande Southern Railroads were of silver filigree, and three were made of gold. The passes all come with a serial number, the patron’s name, and Otto’s signature.

In 1892, Otto Mears proposed an electric-powered railway that would connect Ironton with Ouray, overcoming the steep 7% grades. The route would also require had tight curves, several loops, and extensive tunneling. But the Silver Crash of 1893 prevented its construction.

When Congress repealed the Sherman Silver Purchase Act in 1893, it dramatically devalued the price of silver. As a result, many of the area mines closed suffered, and the railroad suffered. By 1897, the Silverton Railroad pulled back from Ironton to nearby Red Mountain Town. 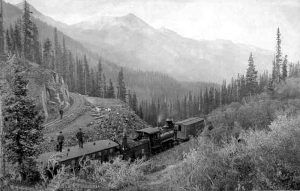 It was soon reorganized as the Silverton Railway and was reopened from Red Mountain Town to Ironton in 1906. It was then leased to The Red Mountain Railroad Mining and Smelting Company, which started a project called the Joker Tunnel. This project drained the previously closed mines of water and began to produce ore again. This made both the mines and the railroad profitable again.

In 1909, the line suffered damages due to several violent storms. At that time, all four railroads operating out of Silverton were severely damaged by washouts and slides.

In 1911, Mears retired at the age of 71, and his son-in-law, James Pitcher, took over control of his railroads. 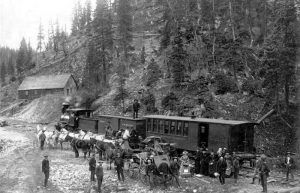 In the next decade, traffic along the Silverton Railway slowed. Passenger operations were cut back to Red Mountain Town by 1912. World War I revived mining in the area, but the Federal Government took control over the railroad. After the war, the Silverton Railway’s fortunes turned from bad to worse, and in 1919, only 49 trips were made over the line.

By August 1921, there was no more traffic along the railroad, and a petition was submitted to abandon the line. It was granted in 1922, bringing an end to the railroad line. The equipment was transferred to the Silverton Northern Railroad, and the right of way was transferred to San Juan County and the Colorado State Highway Departments. The rails were pulled up in 1926.

The Colorado Department of Transportation built much of the “Million Dollar Highway” along the roadbed of the Silverton Railroad, or Mears’ original toll road to Ouray.

The Railroad Across America