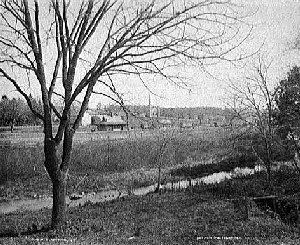 The Haunting of Caulderwood Manor

In 1952 a small farmhouse was constructed not too far from Peapack-Gladstone, New Jersey.  When it was completed, a young woman and her husband moved in.  A few years later, in 1955, the young woman was bumped from behind in a New York City subway. Losing her balance, she fell onto the tracks and was almost immediately hit by a subway train.  Her widowed husband continued to live in the house until 1960.

The following year a well-known local carpenter moved into the house. After living there for 11 years, he was driven crazy by strange lights coming from the basement and a voice that constantly told him to “leave now!”

The house remained abandoned for the next nine years, when finally, in 1981, an elderly couple moved in.  They not only heard the voice of the young woman but encountered her apparition. Described to be about 35 years old, she was dressed all in white, and her eyes were almost bleeding.  Soon, the couple called upon the services of a local minister to drive the spirit out.  However, all attempts were unsuccessful, and in November 1995, they finally gave up and sold the house. 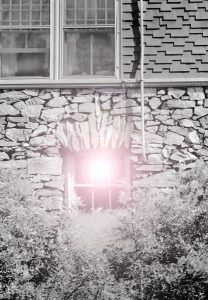 Unfortunately, I was the new owner.  For the first several years, everything was fine. However, in 1998, I began to hear footsteps going up and down the stairs and strange lights glowing and flickering in the basement.

One year later, in 1999, a series of unbelievable, unexplained events began to occur. The first was a chimney fire. Though the chimney had been cleaned just the previous week and no fire had been lit in it yet, it inexplicably burst into flames.  On another occasion, every single light bulb in the house exploded and cast a green light that hovered on the ceiling for the next ten minutes.

The final straw was when I was walking my dog around the house one day. Suddenly, the plants surrounding the house burst into flames. The fire was gone in seconds. Taking a closer look, there remained no evidence of the fire – no ashes or burn marks on the ground or upon the house.

These strange events led me to believe the woman who was killed many years ago was driving everyone out of her house. She wanted it back…and I gave it to her. In 2001 I abandoned the house and moved to New England.

In 2003, a young couple bought the old farmhouse. I send my prayers to them and wish they don’t go through the hell I did. I will never forget what happened at Caulderwood Manor.