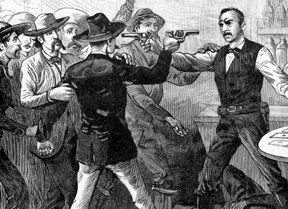 Frank Loving, sometimes called “Cockeyed” Frank Loving was an Old West gambler and gunman. He was involved in two famous gunfights — the first was the Long Branch Saloon Shootout in Dodge City, Kansas in 1879. In the second gunfight, known as the Trinidad, Colorado Shoot-out, he would not be so lucky.

Born in Jackson County, Missouri around 1860, Loving moved with his mother to Fort Worth, Texas in the early 1870s after his father died. By the time he was in his late teens, he had made his way to the lawless town of Dodge City, Kansas, having taken on the “career” of a professional gambler. 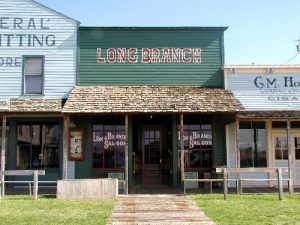 Loving had been arguing with a man named Levi Richardson, allegedly over Loving’s wife, Mattie. On April 5, 1879, the argument came to a head when Richardson strode purposely into the saloon and drew his six-guns on Loving. Loving then drew his gun and the Long Branch Saloon was then filled with smoke. Charlie Bassett, the Dodge City Marshal heard the shots and came running. By the time he arrived, both men were still standing but Richardson had shot five shells from his gun and Loving’s Remington No. 44 was empty. Richardson then fell to the floor with a fatal gunshot in the chest, as well as a shot through the side and another through the right arm.

Frank Loving, who had only a slight scratch on the hand, was immediately taken to jail. Two days later, on April 7, 1879, the coroner’s inquest ruled that the killing had been in self-defense and Loving was immediately released. The gunfight is known as the Long Branch Saloon Shootout or the Richardson-Loving Gunfight. (See historical accounts HERE.) Later, Frank Loving would leave his wife Mattie, a two-year-old son, John, and a one-year-old daughter, Mintie.

After Dodge City, Loving moved on to another lawless town — Las Vegas, New Mexico, before finally making his way to Trinidad, Colorado in 1882. There, he ran into an “old” Dodge City acquaintance and gambler, John Allen. Allegedly the two had been arguing for some time over loans the two had made to each other. The next thing you know another gunfight was in the making. This time, Loving would not be so lucky. On April 16, 1882, he was killed by Allen in what is known as the Trinidad, Colorado Shoot-out. Allen was arrested and charged with murder, but several months later he was found not guilty and released.

Gunfights Across the Country