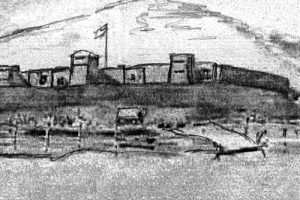 Fort Peck, Montana was established in 1867 by Colonel Campbell Kennedy Peck, a partner with Elias H. Durfee in the Leavenworth, Kansas trading firm of Durfee and Peck. The stockade, located along the Missouri River, was built by company employee Abe Farwell. It was constructed of sturdy cottonwood logs and had a 12-foot-tall stockade with several low buildings inside.

For some time, it enjoyed a virtual monopoly in trade with the Sioux and Assiniboine people, rivaling Fort Union in North Dakota.

In 1873, it became the Indian Agency for the Assiniboine and Gros Ventre Indians. A narrow shale ledge supporting the fort made steamboat docking and unloading easier. But, it would be the Missouri River that would be the fort’s undoing in 1877 when it flooded and destroyed the stockade.

The Indian Agency then moved to Poplar Creek, Montana. The original site today is covered by the waters of Fort Peck Reservoir.

The new town of Fort Peck was established about two miles north of the original location. In 1933, the town became the headquarters for the construction and operation of the massive Fort Peck Dam. The following year, the Army Corps of Engineers designed a government-owned town that included an administrative headquarters, a hospital, stores, a theater, a recreation hall, and other facilities. Today, the small town still features several buildings listed in the National Register of Historic Places. It also offers views of Fort Peck Lake and an interpretation of Lewis and Clark’s journey through northeast Montana.