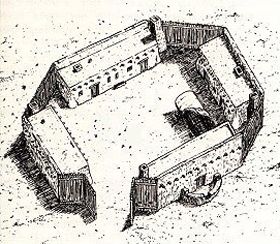 Fort Mann was located on the Santa Fe Trail just a few miles west of present-day Dodge City, Kansas. Fort Mann was established in 1846 by a master teamster, Daniel P. Mann,  as a halfway station between Fort Leavenworth and Santa Fe, New Mexico. Though not an “official” military post, it was ordered to be built by Captain William M. D. McKissack, assistant quartermaster to the Army of the West, who was stationed in Santa Fe, New Mexico.

Daniel Mann and 40 teamsters began the construction of the post in April 1846 on the north bank of the Arkansas River. Consisting of four flat-roofed buildings connected by a high stockade, it could only be entered through two 12″ thick gates. In the center was a 6-pounder cannon mounted on light wagon wheels for mobility.

The fortress was strategically positioned at a site on the route that all supply trains, regardless of their route to Santa Fe, would have to pass by. The wagon trains that passed by and the fort itself was often the target of hostile Indians. In June 1847, the post was attacked by some 400 warriors, and though the untrained men could repel the attack, the fort was soon abandoned. That summer, bands of Kiowa, Apache, Pawnee, and Comanche became more aggressive, killing 47 travelers, destroying 330 wagons, and stealing about 6,500 head of stock and horses.

The post quickly fell into disrepair, and supply trains feared for their lives. Finally, regular military troops were sent to the post to rebuild and enlarge it, and provide protection along the trail in October. However, conditions at the post were deplorable, with insufficient supplies and poor leadership. By the following year, the ineptness proved futile, officers were forced to resign, and the troops returned to Fort Leavenworth. Fort Atkinson was established two years later to protect the Santa Fe Trail. Fort Mann was located about three miles west of Dodge City.