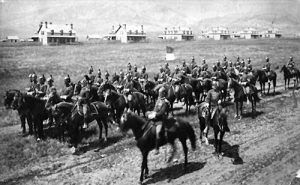 During the Indian Wars of the area, Fort Maginnis, Montana was the last of five forts built following the defeat of Lieutenant Colonel George A. Custer at the Battle of Little Bighorn in June 1876. The others were Fort Keogh in 1876, Fort Custer in 1877, Fort Missoula in 1877, and Fort Assinniboine in 1879.

Located on the east side of the Judith Mountains, Fort Maginnis was established in 1880 by companies of the 3rd Infantry Regiment under the command of Captain Daingerfield Parker. It was named for Major Martin Maginnis, Montana’s territorial delegate to Congress. Elements of the 1st United States Cavalry Regiment garrisoned the post beginning in 1881.

By 1885, the fort, under the command of James W. Forsyth, was responsible for monitoring the Crow, Cree, and the Gros Ventre Indians. Five years later Forsyth would command the 7th Cavalry at the Wounded Knee Massacre.

The fort was abandoned on April 10, 1890, and most of its buildings were sold to the public. Today there are only ruins left of this once sizable frontier post. Near the fort site, an old cemetery remains intact. The site of the fort is located about 25 miles northeast of Lewiston, Montana. Take Highway 87 east of Lewistown, turn left toward Gilt Edge, and follow the signs.