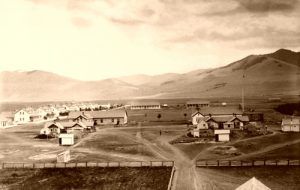 Fort Missoula, Montana was established as a permanent military post in 1877 and built in response to requests of local townspeople and settlers for protection in the event of a conflict with western Montana Indian tribes.

Founded on the Bitterroot River, its garrison took part in only one engagement of consequence — the Battle of the Big Hole in August 1877, 90 miles to the south, in the Nez Perce War. The captives were incarcerated at Fort Missoula. During the next 2 years, when they were not countering minor Indian harassments, the troops restored a stretch of the Mullan Road, running from Fort Benton, Montana to Fort Walla Walla, Washington. In post-frontier days the fort was not continuously active or garrisoned.

In 1904, funds were appropriated to remodel Fort Missoula and a complex of concrete buildings with red tile roofs was constructed between 1908 and 1914, including a new Officer’s Row, barracks, and Post Hospital. During World War I, the fort was used as a military training center but by 1921 it was nearly abandoned. In 1933, it became the Northwest Regional Headquarters Civilian Conservation Corps.

In 1941, the fort was turned over to the Department of Immigration and Naturalization for use as an alien detention center for non-military Italian and Japanese-American men. Its last official function was to serve as a prison for military personnel accused of military crimes and other personnel awaiting court-martial. When the post was decommissioned in 1947, many of the buildings were sold, dismantled, and removed from the site. The majority of the land is now in the hands of non-military agencies, including the U.S. Forest Service, the Bureau of Land Management, and Missoula County. However, a portion of the military reservation continues to serve as an Army and Navy training facility and reserve center.

The Historical Museum at Fort Missoula features 13 historic structures and a large array of historical artifacts.