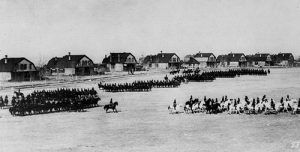 Fort Custer was established in June 1877 by the U.S. Army during the area Indian Wars to control the Sioux, Cheyenne and Crow Indians. The post was located on the high point between the Big Horn and Little Big Horn Rivers south of present-day Hardin, Montana and named for George A. Custer who died at the Battle of the Little Bighorn.

Construction of the fort was led by Lieutenant-Colonel G. P. Buell, of the Eleventh Infantry, commanding four companies of his regiment and a large force of mechanics and laborers. When complete, it had quarters for 10 companies including stables for six troops of cavalry. Its buildings surrounded a large parade ground but it had no walls or other fortifications.

By the time the fort was established, most of the hostile in the vicinity had been confined to reservations, but the post supplied troops for some of the Plains campaigns, including the Bannock War in 1878 and an uprising at the Crow Agency in 1887. 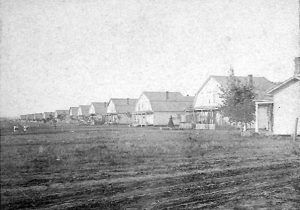 In 1886, Yellowstone National Park turned to the U.S. Army for help, and soldiers from Fort Custer were sent in, beginning what would be more than 30 years of military presence in the park.

With the Indian threat subdued, the post closed on April 17, 1898, and the buildings were sold. Today nothing remains of the fort but a monument. It is located in Big Horn County, on an unimproved road, about one mile west of I-90 and two miles southeast of Hardin, Montana.