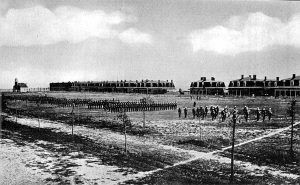 Following the Black Hills War, Fort Assinniboine, Montana, named after the Assiniboine Indians, was established in 1878 to ward off any further attacks from the Sioux and Nez Percé. It was the second fort by this name in Montana.

At the time of its construction, Fort Assinniboine was the most elaborate post in the United States, featuring over 100 buildings and designed to house ten companies of infantry and cavalry. The troops were charged with monitoring the activities of the region’s many Indian groups, patrolling Montana’s border with Canada, stopping bootleggers and gunrunners and protecting the state’s settlers. In its heyday, nearly 750 officers, enlisted men, and civilians called Assiniboine home.

However, with the Indian threat subdued, the fort began to decline. In 1916, a portion of the fort was ceded to the Rocky Boy Indian Reservation (home of the Chippewa Cree tribe.) Later, more land was ceded to Hill County to create Beaver Creek Park, the largest county park in the United States. Unfortunately, most of the buildings at the fort were razed.

Today, several buildings survive on an agricultural extension station associated with Montana State University. Those structures that are left are located six miles southwest of Havre, Montana on Highway 87.