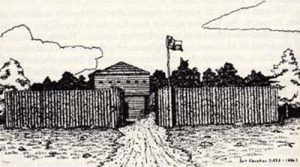 Fort Houston, Texas was a stockade and blockhouse of the Republic of Texas that was was built by Captain Michael Costley’s Company of Texas Rangers, in 1836 to protect area settlers from Indian attacks.

It was named for General Sam Houston. A settlement called Houston had been platted in 1835, and the fort was built in the middle of the town square. Survivors from the massacre at Fort Parker (among them Cynthia Ann Parker’s family) fled to Fort Houston in May 1836. The fort was an important point of frontier defense from 1836 to 1839 and the rangers fought Indians who were making raids nearby. However, the fort was never attacked by Indian forces.

The fort was abandoned in 1841 or 1842, and the settlement then became known as Fort Houston. When Palestine, Texas became the county seat, the settlement and the old military site was purchased by a private individual. Today, the site, located two miles west of Palestine, is designated by a Texas historical marker. Nearby is the old Fort Houston Cemetery. It is located on Farm Road 1990 and U.S. Highway 79, in Anderson County.