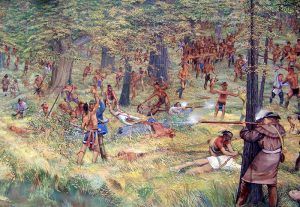 Fort Hanna’s Town was established in 1774 in Westmoreland County, Pennsylvania during Dunmore’s War, a conflict between the Colony of Virginia and the Shawnee and Mingo Indian tribes.

Hanna’s Town was a village founded in 1773 along Forbes Road, the main route into the Ohio Country from eastern Pennsylvania. It became the first county seat of Westmoreland County and the first English court west of the Allegheny Mountains. It was named for Robert Hanna, an early settler whose tavern also served as Westmoreland County’s first courthouse.

At the time of Dunmore’s War in 1774, Arthur St. Clair directed that a fort be built at Hanna’s Town in preparation for possible Indian attacks. The town became a safe place for travelers, settlers, and those seeking justice and order in the often chaotic environment of the western Pennsylvania colonial frontier.

The fort took on added significance during the American Revolution and became an important center for the recruitment of militia for the western campaigns against the British in Detroit and their Native Americans allies. From early in 1776 there were quarters at the fort for the accommodation of the regulars of the Eighth Pennsylvania Regiment and other militia companies. It also became a supply depot.

In one of the final battles of the war, Hanna’s Town was attacked and burned on July 13, 1782, by a raiding party of Indians and their British allies. Though the village was rebuilt, it didn’t stand a chance after Forbes Road was rerouted through Newton. The town never recovered, and the county seat was moved to Newton, which later became known as Greensburg in 1786. The old town was then converted to farmland. 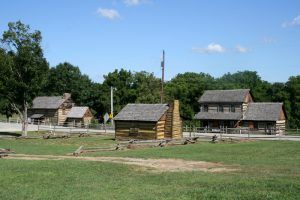 It is located about three miles north of Greensburg, just off Route 119 at 809 Forbes Trail Road in Greensburg, Pennsylvania.