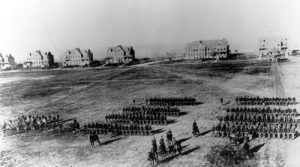 Fort Crook, Nebraska is a century-old fort that is still utilized today as the Offutt Air Base.

Although plans were drawn in 1888 for the establishment of Fort Crook at Bellevue, Nebraska, no meaningful construction commenced until 1894. Situated along the Missouri River, the fort was first used as a dispatch point for Indian conflicts on the Great Plains. The fort was named for Major General George Crook, a Civil War veteran, and Indian Fighter. The first infantry troops arrived on June 28, 1896.

Troops from Fort Crook fought during the Spanish-American War when the 22nd Regiment, under Charles A. Wikoff, was dispatched to Cuba. The regiment suffered heavy casualties in the Battle of El Caney. Only 165 of the 513 regiment members survived with most succumbing to tropical diseases after the battle.

In 1918 arrival of the 61st Balloon Company elevated the post to an airfield. In 1921 landing strips were graded, and by 1924, it became known as Offutt Field. Both the airstrip and army post grew in importance until June 11, 1946, when Fort Crook was officially transferred to the 2nd Air Force, and on January 13, 1948, the entire complex was renamed Offutt Air Force Base.

Today, many of the original buildings continue to stand on the active air force base. The fort’s old brick barracks, hospital, and other buildings are scattered around Offutt Air Force Base, mixed with more modern structures. The oldest surviving portion of Fort Crook is the parade grounds and surrounding red brick buildings that were constructed between 1894-96.

These structures are still in active use today as squadron headquarters, living quarters for high-ranking generals (Generals Row), and Nebraska’s oldest operational jail.

The base, located south of Bellevue, Nebraska is the headquarters of the U.S. Strategic Command and the Air Force Weather Agency. Unfortunately, access to the base is limited only to members of the military and their official guests. 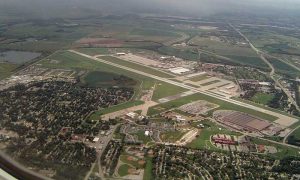