Fort Carroll and its trading post were established 1874 by the Diamond R Transportation Company, of which Matthew Carroll was a founder, to move freight and passengers from the docks on the Missouri River to Helena, Montana. The plan was to replace Fort Sheridan (also called Kerchival City Post) and challenge Fort Benton as a transportation and supply center. The steamboat landing was also called Carroll Landing. it was garrisoned by 7th U.S. Infantry in the summers of 1874 and 1875. The town of Carroll, Montana soon sprung up at the landing. It no longer exists today. 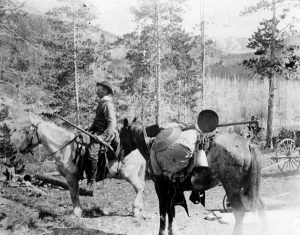 Freight destined for the gold fields in Helena left St. Paul, Minnesota on the newly constructed Northern Pacific Railroad for Bismark, North Dakota where the rails ended. It then came by steamboat up the Missouri River to the newly built Fort Carroll, and then overland by wagon to Helena. Supplies and materials for Fort Maginnis, Montana followed the same route in 1880-81, and then “overland” to Fort Maginnis on the Carroll Trail.  At some point, the site was renamed Rocky Point.

The landing was situated in a stand of cottonwoods whose banks were about a foot above the water. Joseph Kipp had a trading post here from 1880 to 1882 which consisted of a trade store, storehouse, and residence. Both the town and fort were abandoned in 1882.

It was located about 30 miles above the mouth of the Musselshell River on the Missouri River in present-day Fergus County.