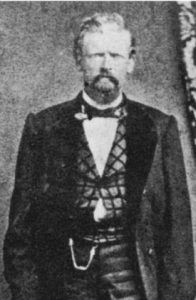 Ferdinand “Ferd” J. Patterson was a “dandy” gambler, gunfighter, and outright killer who made the rounds of California, Idaho, and Oregon, before being shot down in Washington.

Patterson was born in Texas in 1821, and little is known of his early life, though he was said to have shown early signs of rebellion and had a bad temper.

In the late 1850s, he arrived in California at the tail end of the gold rush. He stood over six-foot, weighed more than 200 pounds, had red hair and a pair of restless blue eyes, He presented himself as a “dandy,” wearing cashmere shirts, silk vests, and a long black frock coat trimmed with fur. His outfit also consisted of an ivory-handled Colt .31 caliber revolver and matching Bowie knife.

In 1859, he made his way to the mining camp of Waldo, Oregon, where his appearance made it clear he wasn’t there to use a pick and shovel in the nearby mines. Instead, he quickly began to make the rounds of the gaming tables in the saloons. The local miners were no match for the prolific gambler and lost much of their hard-earned money to the visiting stranger. On one occasion, Patterson was said to have gotten into an argument with two local miners over a card game and promptly gunned them both down.

He also got on the bad side of George Wells, the local lawman, and a former Texas Ranger. On one afternoon, in front of a saloon, the two men got into an argument which soon led to gunplay. Wells shot Patterson in the side, but as Patterson went down, he continued shooting, hitting Wells in the arm. Both men recovered from their wounds, although Wells ended up with a permanently disabled arm. Afterward, Patterson was run out of town.

Patterson then continued gambling and gunfighting in Oregon and California, especially in San Francisco’s seamier attractions. But no one got the better of him.

He next made headlines in 1861 while on a steamer called the Panama, which was cruising from San Francisco, California, to Portland, Oregon. The passenger list included a party of so-called sporting men and women, of which Patterson appeared to be the recognized leader. Once the vessel had cleared the harbor and was out to sea, Patterson and his cohorts took possession of the saloon and cardroom, where they began to ply their trade, introducing three-card monte and other gambling games. He was traveling with a woman who was about 28 years old, who was also proficient at cards.

As the ship was anchored at Astoria, Oregon, the group partied hard late into the night. After Captain G.W. Staples received a visit from a committee of passengers who demanded that the boisterous conduct and the profane language be stopped, he went to the card room, where he courteously requested that the sporting fraternity retire. When Patterson replied insultingly, the captain threatened to put him in irons. The party then dispersed, with Patterson saying that he would see the captain after the ship landed in Portland. 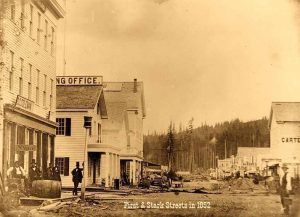 Once in Portland, the still-simmering Patterson tracked Staples to the lobby of the Pioneer Hotel and shot him dead. The murderer surrendered to a policeman, who entered the hotel after hearing the shot fired. Patterson was arrested and tried for the murder but was found not guilty by a local jury.

Commenting later on the encounter with the Captain, Patterson said, “Guns were drawn, shots exchanged, he’s dead, I’m not – and the court found the killing justified.”

However, Patterson’s run-ins with the law in Portland were far from over. Next, after accusing his girlfriend of making eyes at other men, Patterson, using his sharp bowie knife, cut off a large lock of her hair and ended up with a piece of her scalp as well. A policeman, hearing the woman scream, entered the house and placed the offender under arrest. Again Patterson was in the hands of the Portland authorities.

He went to trial but was again acquitted. Patterson would afterward recall, “When a woman’s mine, she’s mine – and she’d better not blink her eyelashes at anything else in pants. This one – never mind her name – did a bit of blinking.” 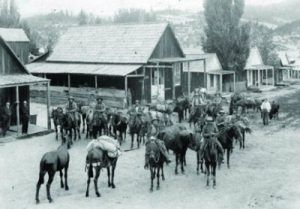 Ferd Patterson was next heard from when he arrived in Idaho City, Idaho, a booming mining camp in the mountains outside Boise, in 1863. Upon his arrival, Patterson was pleased to find a large population of Southerners who would support his fervent hatred of “them damn Yankees.” Here, he would come into conflict several times with Boise County Sheriff Sumner Pinkham.

On one occasion, while he was partying with some of his friends, they took unlawful possession of a brewery. The owner called upon Sheriff Pinkham to do something about it. When Pinkham entered the brewery, he was met with violent resistance. Pinkham and Patterson saw in each other everything they loathed. Patterson was Southerner who was crooked by nature, and Pinkham was a Northerner who tended to be self-righteous. In the end, Pinkham was successful, and Patterson was arrested.

The following year Pinkham was running for re-election as Boise County Sheriff in October 1864. In a bitter contest between the Democratic successionists and Republican candidates, Pinkham, an outspoken Union supporter, was defeated by A.O. Bowen.

As the last of the ballots were being counted, Ferd Patterson was celebrating when he encountered his old nemesis Sumner Pinkham, who was in a rage. Wasting no time, the lawman took a swing at Patterson, hitting him in the jaw and throwing the gambler off the street and into the gutter. Then Pinkham walked away. Locals expected immediate retaliation from Patterson, but it did not occur. 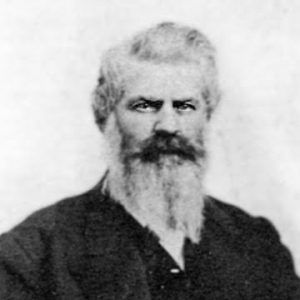 After losing the election Sumner left Idaho City to visit his dying mother in Illinois. When he returned in 1865, the locals immediately began to speculate that Ferd Patterson and Sumner Pinkham were going to have it out.

After the Civil War’s end, Sumner Pinkham staged a gala Fourth of July party. The crowds were mainly in a festive mood, with fireworks blazing and booze flowing. The celebration included a brass band, speeches, patriotic songs, a picnic, and a parade with Pinkham leading the way through town. For the victorious Yankees, it was a proud day. But, for the sullen Confederate sympathizers, it was not so much, and they heckled the “Blue Bellies” throughout the day. For Patterson, seeing Pinkham leading the parade was a further stab at his southern loyalties.

Pinkham was singing “Oh, we’ll hang Jeff Davis to a sour apple tree!” when Ferd Patterson yelled out to the ex-sheriff that if he didn’t shut his mouth, he’d shut it for him. Pinkham invited him to try, and he did. A brief scuffle between the two men resulted in the flag falling into the dust of the street. Some witnesses swore they saw Ferd Patterson spit on it and others attested they heard Pinkham swear he would kill Patterson for that.

Several weeks later, on Sunday, July 23rd, Sumner Pinkham took a hired carriage from Idaho City to the Warm Springs Resort about two miles west of town. Upon his arrival, Pinkham joined a number of his Unionist friends in the saloon, where they were heard singing patriotic and anti-Confederate songs.

Sometime later, Ferd Patterson entered the resort while Pinkham was paying his bill. Initially, Patterson ignored Pinkham, but by the time the ex-sheriff exited the resort, Ferd was outside waiting for him. Here, witnesses reported they heard Patterson say the word “draw” and then taunted Pinkham by calling him an “Abolitionist son-of-a-bitch.” Who drew first was in dispute, but in the end, Pinkham was dead. 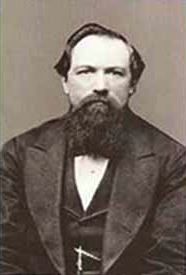 Patterson quickly fled but was immediately followed by several lawmen. First to catch up with the killer was famed lawman Orlando “Rube” Robbins, who found Patterson on the road to Boise, about 14 miles from Idaho City. Patterson immediately surrendered to Robbins, who turned the killer over to Sheriff Bowen, who was next on the scene. Bowen and his men took over and escorted Patterson back to Idaho City.

When the lawmen and their prisoner arrived, they were met with a mob bent on lynching the killer, but the lawmen outwitted them and got their prisoner safely into the jail. At that time, the town jail, the first in the Idaho region, was on an acre of ground surrounded by a stockade. The mob swarmed outside the stockade, continuing to threaten Patterson, but the lawmen defended the stronghold with a cannon thrust through portholes in the protecting fence.

Ferd Patterson was tried for Pinkman’s murder at the beginning of November 1865. In the six-day trial, defense attorney Frank Ganahl claimed his client acted in self-defense, arguing that Pinkham was laying in wait for him. Alternatively, Pinkham’s friends testified that he tried to avoid a showdown and that Patterson came to Warm Springs with the explicit purpose of murdering Pinkham.

It took only an hour and a half for the jury to acquit Patterson.

“This ruffian has gone through the farce of a trial by a jury of fellow “Democrats” at Idaho City and, of course, has been acquitted. By those who know the character of Patterson and his associates in Idaho, no other verdict was anticipated.”

“Ferd Patterson has been acquitted, as expected. Idaho juries do not inquire whether a crime has been committed. All they ask is: “Was it a fair fight?” If so, they cry: “Not guilty!”

Knowing he was in extreme danger, Patterson quickly fled Idaho City after his acquittal. 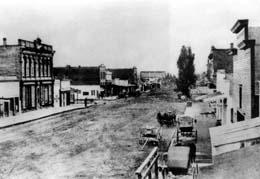 He next landed in Walla Walla, Washington, where he once again applied his gambling skills. On the night of February 14, 1866, he ran into Hugh Donahue, the lawman who arrested him for scalping his girlfriend in Portland, Oregon. The two had harsh words but soon parted ways without gunplay.

However, when Patterson was sitting in Richard Bogle’s barbershop for a shave and haircut the next morning, Donahue entered through a back door and fired on Patterson, hitting him on the right side of his jaw. As Patterson stumbled toward the door to escape, Donohue continued to fire, killing the “dandy” gunfighter.

Donahue was arrested and charged with murder. The jury was split at his trial, and a new one was ordered. One night while awaiting his second trial, he found his cell door mysteriously unlocked. Unguarded, he walked out of the building and was never heard from again.

Sumner Pinkham – Dead at the Hands of a Gunfighter