Edward T. “Red” Beard was a little-known gunfighter who drifted across the West before settling down in the rowdy cowtown of Delano, Kansas.

Born in 1828, he was the son of the man who founded Beardstown, Illinois. Well educated, he grew up to marry a cultured woman from Virginia. Although he was a member of a prominent family and the father of three children, Beard abruptly pulled up stakes in 1861 at the outbreak of the Civil War. Though some accounts say that he was run out of the state, one step ahead of a rope, the facts are unknown.

He headed West, wandering about California, Oregon, Colorado, and Arizona for several years. Along the way, he acquired a reputation as a gunfighter. He was also known for having a bad temper, which would make him a very dangerous man.

By 1873, he was attracted to Kansas by the cattle boom. He established a disreputable saloon in Delano, Kansas, a bustling town across the Arkansas River from Wichita. Located on the Chisholm Trail, with a large influx of cowboys, and without  lawmen, Delano was known for its vice and violence. Initially, Beard’s saloon prospered but was often known for gunplay.

On October 27, 1873, “Red” Beard became angry with a prostitute in his saloon who worked across the street at a saloon owned by “Rowdy Joe” Lowe. Running her out of his place, he chased her across the street, firing his pistol. Following her into Lowe’s Saloon, he accidentally shot and wounded a patron and another girl. Lowe then opened fire, wounding Beard, who died on November 11. 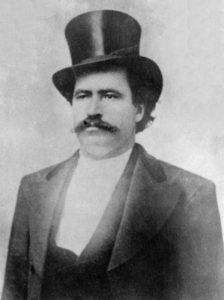 Gunfighters of the West