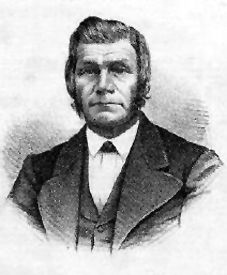 Cyrus Alexander was an early setter of Sonoma County, California and trapper In the Rocky Mountains.

Born in Pennsylvania on May 5, 1805, Alexander was the seventh of eight children. When he was just five-years-old he moved with his family to Illinois. As a child, he was in poor health and spent much of his time reading adventure tales rather than working on the farm. When he grew up, he learned the tanning and shoemaking trade, and at the age of 22, set out to make his fortune in Illinois. Not finding the trade to his liking, he next joined the American Fur Company in 1831, trapping in the Rocky Mountains.

But, by 1833, he was in southern California, where he worked at a number of occupations before he began to hunt otter and sea lions. During this time, he met Captain Fitch, who had been granted some 35,000 acres of land in northern California. Fitch soon sent Alexander on a scouting expedition of the property in what is present-day Healdsburg in Sonoma County.

In 1840, Alexander became the ranch foreman for the large Rancho Sotoyome. He continued to work for Fitch until 1844 when he received a portion of the land for his own use. The same year, he married a 13-year-old child bride named Rufina Lucero. He soon turned over the management of Fitch’s ranch over to Mose Carson, brother of Kit Carson and settled his own land, eventually becoming known as a California agricultural pioneer. Continuing to diversify, Alexander was a wealthy man by the time he was 60 years old. But, at that age, he had a severe stroke that left him partially paralyzed for the next seven years. He died on December 27, 1872. Rufina died there also on March 18, 1908.