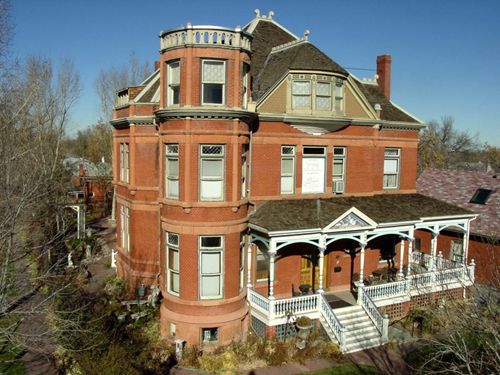 Once the home of lumber baron John Mouat in the late 1800s, the Lumber Baron Inn in Denver, Colorado now serves as an elegant bed and breakfast and event location in the historic Potter-Highlands neighborhood. Not only does it cater to the new traveling public, but it is also said to host some lingering spirits who refuse to move on.

The mansion was built in 1890 by John Mouat, a Scottish immigrant who had amassed a fortune in lumber. Between 1889 and 1892, the Mouat Lumber company built over 200 buildings in Denver, helping to transfer the town from a mining camp to the glittering city that it would become. Built along Cherry Creek, overlooking the rowdy mining camp below, Mourat built the “best” building for himself, his wife, and five children.

Showcasing his finest “wares” in the 8,500 square foot mansion, each room featured a different type of wood varying from oak to cherry to sycamore, maple and more. With an eye for detail, every fireplace mantle included distinct carvings and fine details. Wood in the dining room included numerous carved rosettes representing the varied species of trees used in the guest rooms, each of which had its own private bath and phone. The third floor, which the Mouat’s utilized to host lavish parties, featured a 20-foot pyramid ceiling and a shining maple floor. It was the largest and grandest house in the neighborhood. 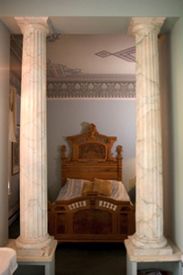 Alas, like many historic buildings, the mansion passed through a number of hands through the decades until it finally was nothing more than a run-down tenement building. It was during this time that a terrible event occurred – the murder of two young women.

In 1970, a 17-year-old runaway girl who was living in the building was brutally raped and strangled to death. Shortly afterward, her 18-year-old friend had the unfortunate timing of stumbling upon the murder. The killer then shot the second girl. The murder, which remains unsolved, is allegedly blamed for the paranormal activity that takes place in the building today.

By the 1990s the building was in such terrible shape that the city had condemned it. However, in 1991, the once glorious structure was saved by Walter and Julie Keller. Fully restored today, the Kellers went through the long and tedious process of removing the many years of neglect and restoring the building’s original grandeur. Today, it serves as the Lumber Baron Inn & Gardens, one of Denver’s most beautiful examples of Queen Anne architecture, and plays host to weddings, murder mystery weekends and overnight guests.

Since it has re-opened, the Inn has experienced a number of haunting incidents, including sightings of a young woman. Often, phantom footsteps are also heard.

Investigated several times by paranormal groups who have used Electronic Voice Phenomena (EVPs), some have said they were able to contact the two murdered women, who, although relaying their horror, have obviously not given enough clues to arrest a killer. The murder investigation continues.