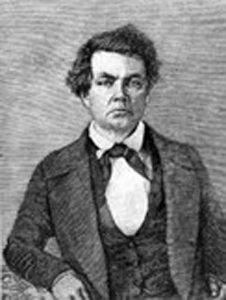 Cartography, from the Greek words kartes (map) and graphein (to write), dates back more than 12,000 years. Today, cartography is a science and art incorporating the latest ground and aerial/space technologies. The history of mapmaking associated with the American Western Movement was established with the Lewis and Clark Expedition in 1803. In 1805 they sent President Thomas Jefferson, the ‘great grandfather’ of all western maps. After that, government surveys and mapmaking expeditions were dispatched in many directions and for different purposes. One expedition in 1843 led by topographical engineer John C. Frémont led to a series of famous American maps.

Frémont’s cartographer was the German Immigrant George Karl Ludwig Preuss (Charles Preuss) from Hohscheid, Germany. Preuss emigrated to the United States with his family in 1834 and acquired his start with the aid of another German immigrant, Ferdinand Hassler. Hassler-Superintendent of the United States Coast Survey — put Preuss to work on surveys along the East Coast. Preuss found work with a mining company in western Maryland when his survey ended. He quit the company after the death of his child and applied for work with Hassler, but none was available.

Hassler recommended 39-year-old Preuss to twenty-six-year-old John C. Frémont in 1841. Frémont was working on map data from his assignment with Nicollet’s 1839 Missouri Expedition and was organizing plans for a government-sponsored 1842 expedition to the west. Frémont hired Preuss to handle astronomical observations, but Preuss said he was a topographer. Frémont agreed to do the observations for Preuss, who would do the topographical work and create the maps.

The first Frémont expedition (1842) headed west with an array of interesting and colorful characters, including guide Kit Carson and Thomas Fitzpatrick. After five months, the expedition returned, reports were filed, and a second expedition for 1843 was planned, soon executed, and reported. A consequence of the first two expeditions was a map commissioned and published by the government in 1845 — Map of and Expedition to the Rocky Mountains in the Year 1842 Oregon and Northern California in the Years 1843-44. 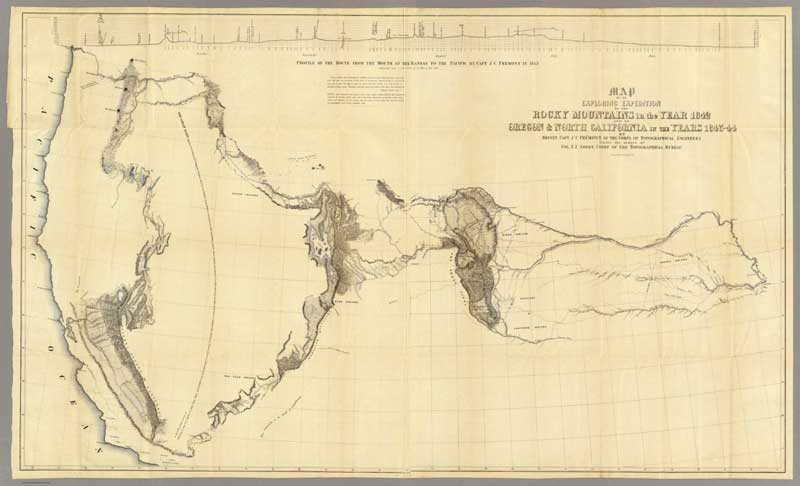 Charles Preuss – Map of the Expedition to the Rocky Mountains in 1842 Oregon and Northern California in 1843-44.

After the publication of the 1845 map, Preuss was commissioned by the government to create what became known as the ‘Oregon Trail’ map (7 sections). Preuss’ topographic/cartographic skills depicted very useful information for those traveling west.

According to distinguished historian Donald Jackson, the Senate proposed to create 10,000 copies and hopefully sell them for five to ten cents each. Lithographer E. Weber & Co., Baltimore, was again selected to work for the Senate. In April, Preuss was engaged to produce the maps according to the terms he proposed. Using notes from the 1842 and 1843-44 expeditions, Preuss went to work creating seven maps using 10 miles to the inch- approximately 250 miles per sheet (map). This scale allowed for much more detail than the 1845 map. Jackson said these maps could be considered the first American road atlas- but hardly useful today. Comprised of seven separate sections, these maps were sold to emigrating Mormons throughout the east and in England. The maps served the government, wagon train masters, and emigrants venturing to the west.

Frémont sought out Preuss for a 5th Expedition in the spring of 1853. Preuss was currently living in Washington, DC. Mrs. Preuss (Gertrude) – highly weary of Frémont’s past experiences and compulsive and obsessive behaviors- intervened and said, “No!” Instead, Preuss took a job as a draftsman on a historic Pacific Railroad Survey to the southwest. After his return to Washington, DC, he became ill and unable to fulfill his work with the survey and became depressed. On September 2, 1854, he was found hanging in a tree on a friend’s farm a few miles away in Bladensburg, Maryland.

We have to record today the most melancholy event that has occurred in our midst for years. Mr. Charles Preuss, surveyor and companion of Col. Fremont in the discovery of the best route to California, is no more. Some four years ago, he was sun-struck in California, which more or less afflicted his mind ever since.

About a week ago, the malady became worse, derangement fully appearing when he was kept at home and carefully attended to. Day before yesterday, he walked out and went to the penitentiary, where he asked the keeper to furnish him with a room. The keeper put him off in a kind manner when he left the building, and no trace of him could be found until last evening, when his dead body was found back of the farm of Clark Mills, Esq., near Bladensburg. In his insanity, he wandered away from home and perished there.

Mr. Preuss was one of the most scientific men in his profession and bore a most excellent character. His last trip was with Capt. Williamson, surveying a route for the Pacific Railroad, during which he was afflicted with an attack consequent upon the first injuries received. He was a Prussian by birth, we understand, and leaves a deeply afflicted wife and family and numerous warm friends to mourn the melancholy event. 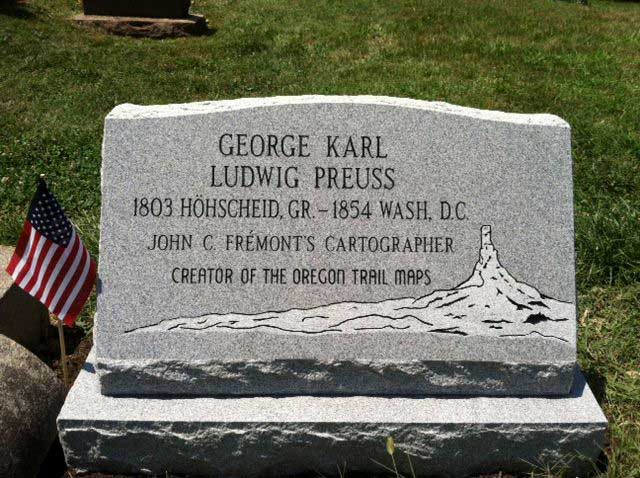 About the author: Stephen C. Schell, now retired, was an educator in American history, economics and humanties from Fort Collins Poudre High School, and in humanities at Regis University. Schell authored the self-published works Following John C. Fremont’s Trail through Northern Colorado, 1843 (2010) and Older than Mash: A Look Back at the 64th Field Hospital in World War II (2001). He was the historian referenced who located Charles Preuss’ unmarked grave in D.C.  Schell has kindly agreed to provide this history of Charles Preuss for Legends of America.

Fremont’s Expeditions of the American West