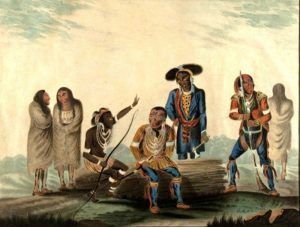 Act for the Government and Protection of Indians (1850) – Passed by the legislature of California on April 22, 1850, this law allowed settlers to continue the Californio practice of capturing and using Native people as forced workers. It also provided the basis for the enslavement and trafficking in Native American Native labor, particularly that of young women and children, which was carried on as a legal business enterprise. Raids on villages were made to supply the demand; the young women and children were carried off to be sold, the men and remaining people often being killed. This practice did much to destroy Native tribes during the California Gold Rush. More…

Gila Expedition (1850) – Also called the Morehead War, this militia attack occurred between April and September 13, 1850. The expedition by the California Militia was intended to punish the Yuma Indians for the Glanton Massacre, which took place near the confluence of the Gila River and Colorado River in Arizona. It was the beginning of the Yuma War, which lasted from 1850 to 1853. On April 16, 1850, 142 men commenced the expedition against the Yuma, but the military operation went badly, and the expedition members were besieged until September 16. Because of the inflated costs of goods and wages during the Gold Rush, the cost of the operation reached $113,000, nearly bankrupting the state of California as the first of its military operations against American Indians.

Yuma War (1850-1853) – A series of United States military operations conducted in southern California and southwestern Arizona. The war erupted after the Glanton Massacre and Gila Expedition. The Yumans were the primary opponent of the United States Army, though engagements were fought between the Americans and other native groups in the region. Conflict generally took the form of guerrilla warfare. Over three years, the army engaged in pursuing unfriendly natives, protecting American settlers crossing the Colorado River, and preventing conflict between the native tribes. A peace treaty in the summer of 1853 was signed, ending hostilities between the Yuma and the United States, but it sparked a short war between the Yuma and the Cocopah. During the conflict, the historic Fort Yuma was constructed and became an important outpost on the frontier.

Bloody Island Massacre (1850) – Also called the Clar Lake Massacre, this was in retaliation for the killing of two Clear Lake settlers who had been enslaving and murdering the Pomo Indians. On May 15, 1850, the massacre occurred on an island called in the Pomo language, Bo-no-po-ti (Island Village), at the north end of Clear Lake, in Lake County, California. It was a place where the Pomo had traditionally gathered for the spring fish spawn. After this event, it became known as Bloody Island. More …

El Dorado Indian War (1850–1851) – A conflict between Native Americans and miners and California State Militia in what was then El Dorado County, California. At this time, California had just been admitted as the 31st state, and the Native Americans were seen as undesirable inhabitants. Peter Burnett, California’s first governor, called for the extermination of Indian tribes and started a war against them and passed the Act for the Government and Protection of Indians, which stated in part that “in no case shall a white man be convicted on any offense upon the testimony of an Indian.” This was one of many reasons that the Indians and Californians had become unrest at the time of the war. The same act also allowed non-Indians to go through a process and take custody of Indian children, which sparked an illegal market, and close to 20,000 Indian children were put in bondage.

Around the middle of the Summer, a group of Indians had been killed by Californians, and in revenge, the Indians killed several Californian miners. In addition, the Indians were accused of stealing from a state coal mine. As a result, some 200 state militiamen were called up to attack the Miwok Indians. In the first battle, the California Militia killed only three Indians and considered it a failure. Afterward, the Miwok warriors began to raid the California miners, killing several of them. The militiamen then planned another attack, which resulted in 15 Miwok Indians being killed and two militia members losing their lives. This fighting ended up being a one-month campaign that cost El Dorado County more than $100,000. After the two battles, the leading state militia commander initiated negotiations that ended the Indian War in El Dorado.

Mariposa War (1850–1851) – A conflict between the Yosemite and Chowchilla Indians with miners and the California State Militia. The conflict lasted from December 1850 through June 1851 in the immense county of Mariposa.

Battle of Infernal Caverns (1867) – After numerous attacks on white settlers in Modoc County, California, General George Crook was sent west to quell Indian uprisings. In September 1867, General Crook, with the 39th Mounted Infantry, tracked a group of Indians, comprised of about 75 Paiutes, 30 Pit River, and a few Modoc warriors, to a desolate spot on the California–Oregon border, called Infernal Caverns. A two-day battle occurred on September 26-27, which left 20 Indians dead, including several women and children. Eight soldiers were killed in the battle. Infernal Caverns, also known as Hell Caves, are located 6.5 miles west of Likely, California, and 1 mile south of the Ferry Ranch in Modoc County, California. The Infernal Caverns Battleground is now a California Historic Landmark and includes the graves of six of the soldiers.

The Modoc War, aka Lava Beds War, Modoc Campaign (1872-1873) – Spawned by the culture clash and loss of land and lifestyle of the Modoc Indians, the natives fought the U.S. Army in southern Oregon and northern California for two years. The last Indian War to occur in California or Oregon resulted in the Modocs being placed on the Fort Klamath Reservation in Oregon and exiling many of them to the Quapaw Agency in Oklahoma.  More …