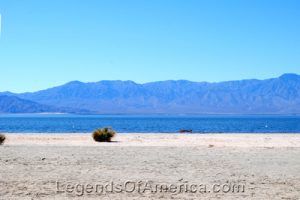 Situated in the Sonoran Desert in southeastern California is the Salton Sea, the largest lake in the state. The Salton Basin has held various waters over the last three million years as the Colorado River changed its course and spilled over, filling up the basin with freshwater lakes that would eventually evaporate. Then, the process would start all over again.

One of these long-ago lakes in known history was Lake Cahuilla, which formed around 700 A.D. and was utilized extensively by the Cahuilla and the Kumeyaay Indians for freshwater fishing, bird hunting, and marsh plants. The ancient lake continued to occupy the basin off and on until about three centuries ago.

By the time European explorers came to the area in the 16th century, the Salton Basin was completely dry, though just half a century before it had been some 26 times larger than the current Salton Sea size.

Over the decades, the lake continued to rise and fall until the last large infilling occurred in the early 1700s. However, by the time Don Juan Bautista de Anza led the first large European party through what is now known as the Imperial Valley, the Salton Basin was a salt-encrusted mudflat. In the 1800s, the Colorado River flooded the basin several times, creating a number of lakes that came and went.

As early as 1815, salt mining began in the area, and when the railroad came through the basin, large scale salt mining started in 1884, and the dry lakebed began to be referred to as Salton Sink or the Salton Basin.

In the late 19th century, the California Development Company and its ambitious president, Charles R. Rockwood, determined to make the Imperial Valley into an agricultural oasis in the desert. A series of canals were constructed in 1900 to allow for irrigation. For a few years, the river flowed peacefully, regulated by a wooden headgate, and watering the fields of fruits and vegetables. However, the flowing waters contained large amounts of silt, which soon blocked the headgate. To correct this problem, the California Development Company then cut a new channel a few miles south of the Mexican border. Unregulated by U.S. authorities, the new channel crossed an unstable river delta. When the Colorado River waters began to peak from heavy rainfalls and snowmelt in the summer of 1905, the dike broke, and the Salton Basin began to fill at an alarming rate.

For two years, the Colorado River flooded the Salton Sink, destroying the town of Salton and the Southern Pacific Railroad siding. Having substantial business interests in the region, the railroad spent some three million dollars to stop the river’s flow into the Salton Sink, finally succeeding in 1907. However, a “new” lake body had been created, which was called the Salton Sea.

The large sea, surrounded by desert terrain, was a natural site for fishermen. Still, without an outlet, the sea became more and more saline as freshwater was pumped out of the lake for irrigation. When the water returned through run-off, it included dissolved salts from the soil, pesticides and fertilizer residue. As the saline levels increased, the freshwater fish died. Over the years, officials began to experiment with bringing in various species of saltwater fish, including salmon, halibut, bonefish, clams, oysters, and more. Unfortunately, these fish also died due to the high saline level. 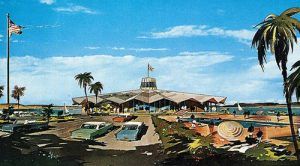 However, in the early 1950s, certain species survived, including gulf croaker, sargo, orange corvine, and tilapia. As the fish began to thrive, it fueled a recreation boom in the 1950s, and the inland desert sea became an inviting sport-fishing and vacation destination. Its coastline developed numerous resorts and marinas catering to water skiers, boaters, and fishermen in no time. Billed as “Palm Springs-by-the-Sea,” restaurants, shops, and nightclubs also sprang up along the shores. The lake enjoyed immense popularity, especially among the rich and famous, as movie stars and recording artists flocked to the area. From Dean Martin to Jerry Lewis, Frank Sinatra, and the Beach Boys, the lake became a speedboat playground.

However, the Salton Sea’s bright lights would quickly fade in the 1970s when the sea’s water level began rising from several years of heavy rains and increasing agricultural drainage. Shorefront homes, businesses, resorts, and marinas flooded several times until the water stabilized in 1980 after a series of conservation measures to reduce field run-off. However, for the many resort areas, it was too late. The salt and fertilizers of the run-off had accumulated to such a degree that they had reached toxic levels, which began a cycle of decay. As algae fed on the toxins, it created massive amounts of rotten smelling matter floating upon the surface of the lake and suffocated many of the fish.

Within just a few years, the resorts had closed, the marinas were abandoned, and those who could afford to had moved, leaving in their wake abandoned businesses and homes and scattered junk.

Today, the Salton Sea continues to maintain itself, fed by the Alamo, Whitewater, and New Rivers, as well as continued agricultural runoff from irrigated farmland. Covering an average surface area of about 375 miles, it is the largest lake in California.

But, still, the lake is in trouble. The salt in the Salton Sea is higher than that of the Pacific Ocean, and numerous restoration plans have been developed over the years, the latest of which proposes to reduce the size of the lake to make it more manageable at the cost of billions of dollars and more than two decades to complete.

The lake is dotted with “signs” of more prosperous times, and the area is much like a “ghost lake,” surrounded by small “ghost towns,” “ghost resorts,” and “ghost trailer parks.” 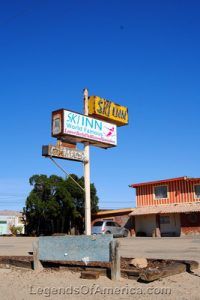 R.E. Gilliagan first developed Bombay Beach – Located on the east shore of the Salton Sea, Bombay Beach in October 1929 as a private community that quickly grew with weekend visitors and retirees. By the 1960s, the town sported numerous businesses and homes. However, the next decade would take its toll on the community as tropical storms and flooding destroyed parts of the town. Though this permanently affected Bombay’s development, the small town still supports about 350 people and a few open businesses amongst a sunken trailer park and abandoned buildings. A dike now protects the west portion of the small community that is located just south of the Salton Sea State Park. It is one of the lowest elevation communities in the U.S., sitting about 225 feet below sea level.

Desert Shores – This small community still supports more than 1000 people and has actually grown over the last several years. However, signs of its resort community heydays can still be seen in a few abandoned businesses and fading billboards. One of the many communities that developed during the sea’s heydays in the 1950s, the city was bustling in the 1960s with the Desert Shores Yacht Club, Marina Mobile Estates, a five-fingered marina, a fishing barge just offshore, and numerous businesses. However, in the 1970s, the town was battered by a couple of tropical storms, and the rising sea level flooded many of the shoreline resorts and homes. Desert Shores is located just north of Salton Sea Beach on the west side of the sea east of SH 86. 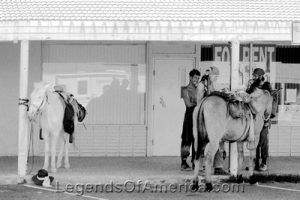 Niland – Another small town on the lake, Niland was once known as the “Tomato Capital of the World,” and though not the agricultural center that it once was, it still sports an annual Tomato Festival, which has been held for more than 60 years. Like neighboring towns, it also developed into a fishing and hunting paradise during the Salton Sea’s heydays in the 1950s and 60s. Today, it is still called home to about 1,000 people, many of whom work at the nearby Calipatria Prison. Another quirky addition just outside of town is Salvation Mountain, a colorful artificial religious folk-art mountain that draws numerous visitors each year.

North Shore – Developed in 1958 by Ray Ryan and Trav Rogers as yet another resort on the coastline of the Salton Sea, they began to sell lots in 1960 and to build the crown jewel of the area — the North Shore Beach and Yacht Club, as well as the North Shore Motel.

The $2 million Marine Paradise opened in 1962 to much fanfare and was described as one of Southern California’s largest marinas. Catering to the rich and famous, the resort soon claimed visitors such as Jerry Lewis, the Marx Brothers, and the Beach Boys who were frequent visitors or kept boats at the marina. 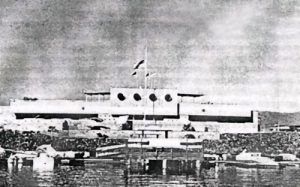 The marina was a hotspot, especially when it featured speed boat races, parties, and dances that drew hundreds of visitors. However, like most resorts on the Salton Sea, fluctuating water levels and flooding created problems in the 1970s. However, the yacht club hanged on until 1981 when it suffered a severe flood that wiped out the jetty and the marina, making it impossible for boats to dock there. The popular club closed to later be utilized as a rehab center and then a nursing home. However, the once-glamorous resort is entirely abandoned today. People still live in homes that dot the hills above the water, but North Shore’s heydays are long gone. However, North Shore is still notable as the Salton Sea National Wildlife Refuge home, one of California’s greatest bird watching areas. Established in 1930, the refuge covers several thousand acres. North Shore is accessible via State Route 111, and the wildlife refuge and campground is just a short distance south of the town.

Salton City – The most ambitious of the Salton Sea developments, Salton city was developed in the late 1950s by M. Penn Phillips and the Holly Corporation, shortly after Phillips had successfully developed the high desert community Hesperia. The development plan called for 25,000 lots, 250 miles of paved roads, swimming pools, churches, parks, a golf course, and a $500,000 luxury yacht club and hotel. Opening in 1958, the development was an immediate success as busloads of people were trucked in to view the new development. By 1964, some $20 million had already been spent developing the community, and about 15,000 lots had been sold. A yacht club was soon built, and motels, restaurants, a championship golf course, airport, and other amenities followed. It’s brochures touted that the “Miracle Salton City by the Desert Sea” would be the most popular sea resort in all of Southern California. And for a time, it was, as sailing regattas, powerboat races, Hawaiian luaus, and fishing tournaments derbies attracted thousands of people including the rich and famous such as Frank Sinatra, Dwight Eisenhower, and Desi Arnaz.

However, though there were numerous lots sold, few homes were built as most people seemingly purchased the lots for investment purposes. And when the lake began to flood, and the saline levels started killing off the fish, Salton City’s plans were doomed.  Today, the yacht club is closed, many businesses stand abandoned, and empty streets lined with dying palm trees feature hundreds of lots for sale but no homes. Though it’s certainly nowhere close to its intended vision, the small town still boasts a population of about 1,000 people and several open businesses. “New” California developers and home builders are also working hard to attract new residents. Salton City is located on State Highway 86 on the west side of the Salton Sea. 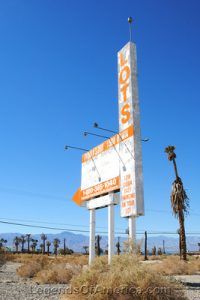 In addition to the many ghostly relics to be seen in the area, there is still active fishing at the Salton Sea State Recreation Area, which also provides for camping, picnicking, and boating. Additionally, the Salton Sea National Wildlife Refuge is a bird-watchers paradise that features more than 375 species of birds, many of whom are endangered. The Salton Sea is located about 30 miles south of Indio, California, on Highway 111.