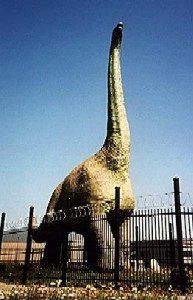 No Old Woman — Just a Very Large Shoe in Bakersfield 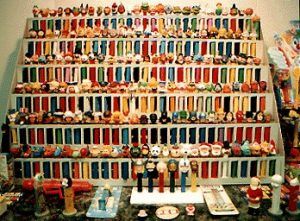 When you were a kid, or perhaps even as an adult, did you love the Pez candies and their many animated dispensers? Did you collect them, line your shelves with goofy plastic characters, and trade with your friends?  If so, the Museum of Pez Memorabilia in Burlingame, California, will delight your fancy as well as your taste buds.

Located just ten minutes south of the San Francisco International Airport, this museum features Pez dispensers and memorabilia in their Pez Exhibit and offers a wide variety of new and vintage Pez items at their Pez Store.

Did you know that Pez candy was invented in 1927, initially as a peppermint flavored breath mint sold in small tins? Originally marketed as an adult mint to help people quit smoking, the original dispensers weren’t the fun type with character heads. Invented in Austria, the term “Pez” is an abbreviation of the German word for peppermint. The first Pez dispenser that we so lovingly know today surfaced about 1950, and about two years later, cartoon heads and fruity flavored candies were introduced.

Today, you can find all your favorite characters, including Donald Duck, Darth Vader, Fred Flintstone, Papa Smurf, Pink Panther, and more than 600 other plastic heads tucked among the shelves, displays, and exhibits of the Burlingame Museum of Pez Memorabilia. In 2004, the museum extended its operations to include a Classic Toy Museum, which features exhibits of the other great toys from your childhood. 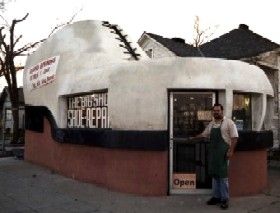 In Bakersfield, California, a building looks like a giant shoe, complete with a 50-foot long shoelace made of black rope. Well, buildings come in all sizes, and a shoe repairman built this particular one in 1947, who once lived in the house just behind this very large shoe. Though big enough for the “Old Woman Who Lived in the Shoe fairy tale” at 30 feet long and 20 feet tall, it was never destined to be anything more than a shoe shop. When the man who built the building died in 1992, he left the property to his wife but stipulated in his will that if the “shoe” was sold, it must be used for its intended purpose – a shoe-related business. No old woman, no kids, no fulfillment of a fairytale, but rather a shoe business or nothing else!

Because of this stipulation, this “Shoe Building” sat empty for a while, but one could still see piles of unclaimed shoes through the windows. In 1997, this quirky structure needed its own cobbler when a car collided with its instep. Well, call them Shoe Repairmen or Building Repairmen. It did get all fixed up and is now trotting along as good as ever.

Last we heard, the large shoe-shaped building was back in business operating an old-fashioned shoe store. This “Cobbler’s Delight” and photo opportunity can be seen along Bakersfield’s main thoroughfare at 1931 Chester and 10th in Bakersfield, California. 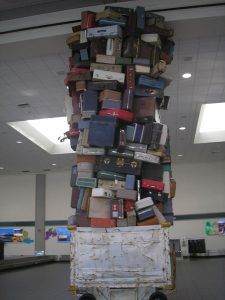 Just flying into California can be an experience. Greeted by a “lost luggage” sculpture in Sacramento by Kathy Weiser-Alexander.

There was an old woman who lived in a shoe
She had so many children she didn’t know what to do.
She gave them some broth without any bread,
Then whipped them all soundly
And put them to bed.