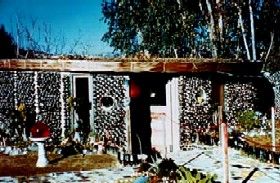 Round House at the Bottle Village

Anyone can do anything with a million dollars. Look at Disney. But it takes more than money to make something out of nothing, and look at the fun I have doing it.

Tressa “Grandma” Prisbrey began building the Bottle Village in 1956 when she was sixty years old. She and her husband had moved their trailer onto a 1/3 acre lot in Simi Valley, California, and Grandma needed a place to keep her pencil collection. She had about 4,000 pencils then. Since there was no money left for construction materials, Grandma Prisbrey drove her Studebaker pickup truck to the town dump and came back with a truck full of bottles. She used the bottles as bricks and built a room to keep her pencils. Then, she just kept on building – some 23 buildings and structures made of glass and other odd materials, a mosaic sidewalk throughout her village, and her pencil collection increased to 17,000.

Other buildings soon included the Leaning Tower of Bottle Village, the Dolls Head Shrine, Cleopatra’s Bedroom, the Round House, and many more. 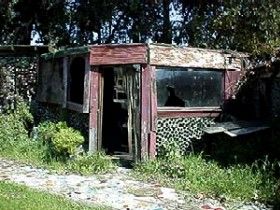 Pencil House at the Bottle Village

Building the Bottle Village was a hobby that Grandma Prisbrey thoroughly enjoyed and she loved to show off her work to anyone who would pay 25 cents for a walking tour, consisting of her guiding her guests, room through room and building by building along the mosaic walk. The walkway was bordered by picture tubes so that her guests wouldn’t wander off during her speech of anecdotal stories and information. Often, the tour would end in the Meditation Room where she would play the piano and sing risqué songs from the 1920s.

By 1981, Grandma Prisbrey’s Bottle Village had received all kinds of attention and had been recognized by the artistic community as well as the state. In February 1981, it was declared a California State Historical Landmark.

Just a year later in May of 1982, Tressa’s health had declined and she left her Bottle Village for the last time. On October 5, 1988, at the age of 92, Tressa “Grandma” Prisbrey died in a nursing home outside of San Francisco, California.  A reporter who talked to her just the day before she died reported that Grandma had this to say: “I’m going home to my Bottle Village.”

In 1994, the Bottle Village was badly damaged by the Northridge earthquake which struck some eight miles away. Though many efforts have been made to repair the damage and keep up the disintegrating village in repair, the Preserve Bottle Village Committee, a non-profit organization, can always use some extra help and/or donations to preserve the creation of this remarkably inventive woman. 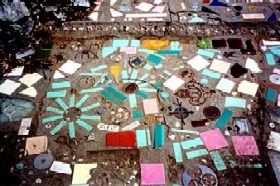 Mosaic Walkway at the Bottle Village