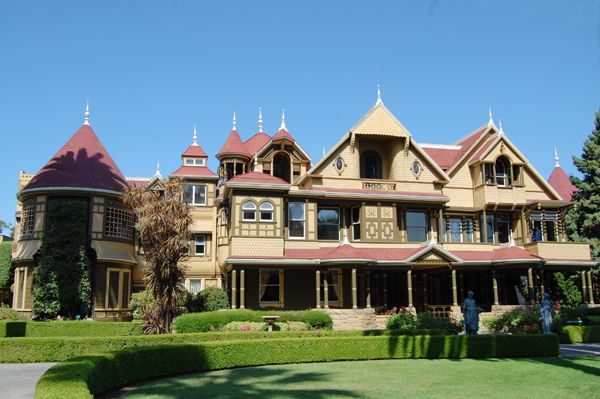 The Winchester Mystery House in San Jose, California was the personal residence of Sarah Winchester, the widow of gun magnate William Winchester. To ward off spirits, Winchester hired laborers to constantly build and renovate the mansion 24 hours a day for 38 years. Today it is renowned for its size and its architectural curiosities. It is also reportedly very haunted.

Sarah Lockwood Pardee, the daughter of Leonard Pardee and his wife Sarah W. Burns, was born in 1839 in New Haven, Connecticut. When she grew up she stood just 4 feet 10 inches tall and was known for her beauty and her sparkling personality. On September 30, 1862, Sarah married William Winchester, the son of the manufacturer of the famous Winchester Repeating Rifle.

They had one child, Annie Pardee, who died about a month after her birth. Then, about 15 years later, on March 7, 1881, William Winchester died of tuberculosis. 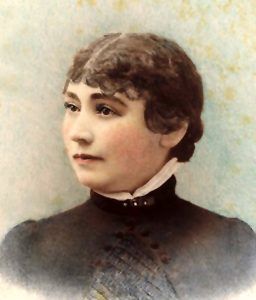 Deeply saddened by the deaths of her daughter Annie in 1866 and her husband in 1881, Sarah consulted a psychic. She was told that there was a curse upon the Winchester family because the guns they made had taken so many lives. The psychic went on to tell her that the spirits of those killed were seeking vengeance and that in order to save her own life, Sarah was to build a home for herself and the spirits — a home that would never be finished. She was also told that the home was to be situated in the west where the sun sets.

After her husband’s death, Sarah Winchester inherited more than $20.5 million (equivalent to $496,344,828 in 2016) as well as nearly 50% ownership of the Winchester Repeating Arms Company. This gave her an income of roughly $1,000 per day, the equivalent of about $23,000 a day in 2017. This made her one of the wealthiest women in the world at that time. Her inheritance would easily enable her to buy property and fund ongoing construction.

She then left her home in New Haven, Connecticut, moved out west and settled in what is now San Jose, California, where she purchased an unfinished eight-room farmhouse from a Dr. Caldwell in 1884. She then began her continuous construction. She hired builders, carpenters, and laborers who worked on the house day and night until it became a seven-story mansion. She did not use an architect and added on to the building in a haphazard fashion. Construction continued without interruption, from 1884 until her death in September 1922. The cost of this eccentric undertaking has been estimated at about $5.5 million. 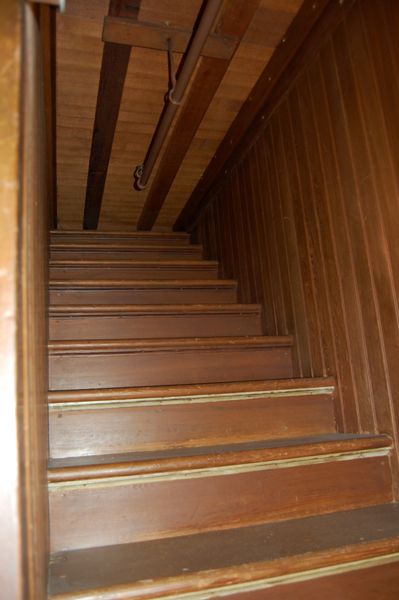 Lacking no specific plan, other than those she received from the spirits, the beautiful but bizarre 161 room mansion includes stairs and doors that lead to nowhere; more bedrooms, kitchens, and fireplaces than anyone could use in a lifetime; hidden trap doors, spy holes, secret passageways, and upside-down columns. Other curiosities include windows overlooking other rooms, cabinets, and doors that open into walls, small rooms built within big rooms, balconies and windows on the inside rather than out, chimneys that stop short of the ceiling, and floors with skylights.

Additionally, Sarah was intrigued by the number “13”. Nearly all of the windows contain 13 panes of glass; the walls had 13 panels; the greenhouse had 13 cupolas; many of the wooden floors contained 13 sections; some of the rooms had 13 windows, the mansion has 13 bathrooms, and many of the staircases had 13 steps. She was also seemingly obsessed with spider web designs that appear in a number of windows as well as on fireplace grates within the mansion.

Overall, the Winchester House is a Queen Anne Victorian with a mixture of shingles, sidings, bric-a-brac, cornices, and accessories that show traces of definite eastern influence in design not found in local craftsmen.

Before the 1906 earthquake, the house was seven stories high, but today it is only four stories. At the time of the quake, the top three floors of the house, several cupolas, and the home’s original seven-story Observation Tower collapsed into the gardens below and were never rebuilt.

It is estimated that approximately 20,500 US gallons of paint were required to paint the house 24,000-square-foot mansion. There are roughly 161 rooms, including 40 bedrooms, 2 ballrooms, nine kitchens, and a séance room. There are also 47 fireplaces, over 10,000 panes of glass, 2,000 doors, 52 skylights, two basements, and three elevators.

The home’s conveniences were rare at the time of its construction, some of which included steam and forced-air heating, modern indoor toilets and plumbing, a telephone, a dumb waiter, electric lights serviced by the estate’s own gas manufacturing plant, and push-button gas lights. The home even had an annunciator that allowed Sarah to summon her servants and indicate to them where she was in the building. 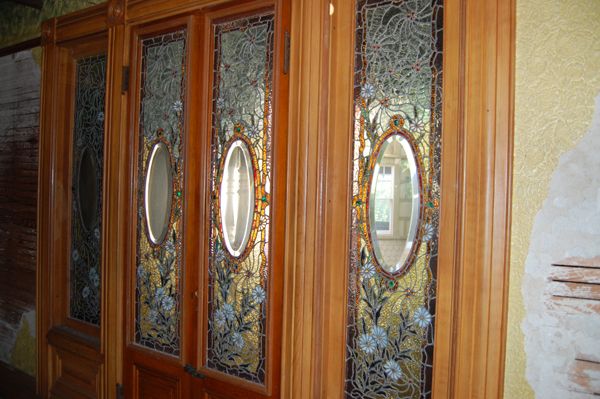 The adornments were lavish including numerous stained glass windows created by the Tiffany Company, gold and silver chandeliers, and hand-inlaid parquet floors and trim

In her determination to build and build, she lived her life in almost complete solitude. And to further confuse the spirits, she slept in a different bedroom every night.

On September 5, 1922, Sarah died in her sleep of heart failure at the age of 83. All of her possessions, with the exception of the house, were bequeathed to her niece and personal secretary. Sarah made no mention of the mansion in her will, and appraisers considered the house worthless due to damage caused by the earthquake, the unfinished design and the impractical nature of its construction.

The building was sold at auction to a local investor for over $135,000 and subsequently leased for 10 years to John and Mayme Brown, who eventually purchased the house. In February 1923, five months after Winchester’s death, the house was opened to the public, with Mayme Brown serving as the first tour guide. Today the home is owned by Winchester Investments LLC, a privately held company representing the descendants of John and Mayme Brown. Today, the mansion, which sits on just 4.5 acres, is open for public tours. 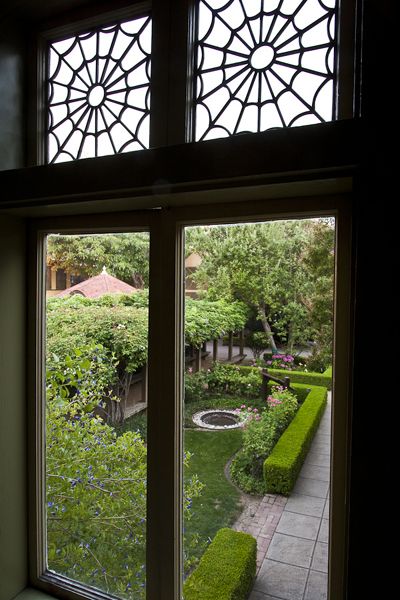 Though some say that this mysterious house is nothing more than the product of an eccentric woman’s mind, others say that the very spirits that Sarah tried to please with the constant building, remain in residence.

Over the years, staff and visitors have reported a number of strange encounters including hearing footsteps when no one is present, banging doors, mysterious voices, and the sounds of someone or something running across the rooftops.

Others have witnessed doorknobs that turn by themselves, strange bobbing lights throughout the building, and windows that bang so hard they shatter. Cold spots are often felt by visitors in various areas of the large mansion.

Over the years, dozens of psychics have visited the house and most have come away convinced that spirits, including that of Sarah Winchester, still wander the place. 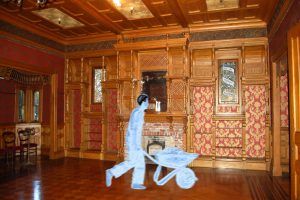 One ghost that is said to linger is that of a handyman that continues to repair a fireplace in the Grand Ballroom. The black-haired man has often been seen pushing a spectral wheelbarrow or working on the fireplace. Others have reported feeling the “presence” of someone or something in the ballroom. The elegant gold and silver chandelier in the grand ballroom swings by itself on occasion. This elegant room was built almost entirely without nails, at a cost of over $9,000 at the time (about $125,600 in today’s currency.) The exquisite ballroom features walls and a parquet floor made of six hardwoods – mahogany, teak, maple, rosewood, oak, and white ash.

Located in the front portion of the house, the Daisy Bedroom, called such because of the floral motif in the stained-glass windows, is also said to be haunted. It was here that Mrs. Winchester was trapped during the great San Francisco earthquake of 1906. Staff and visitors have heard heavy sighs coming from this room, as well as reporting seeing a dark figure, reporting camera malfunctions, and photos that feature a strange white rippling mass.

The Hall of Fires, called so because of several fireplaces, is also a hotbed for spiritual activity. On one occasion, a man who was working on a restoration project, was on a ladder when he felt a tap on his shoulder. He turned to find no one there. When he turned back to his task, he felt a hand pressing hard against his back. When he turned again to find no one, he quickly left the room to find another project to work on.

Another spirit is said to reside in the basement. Known as Clyde, he appears near the old coal chute. 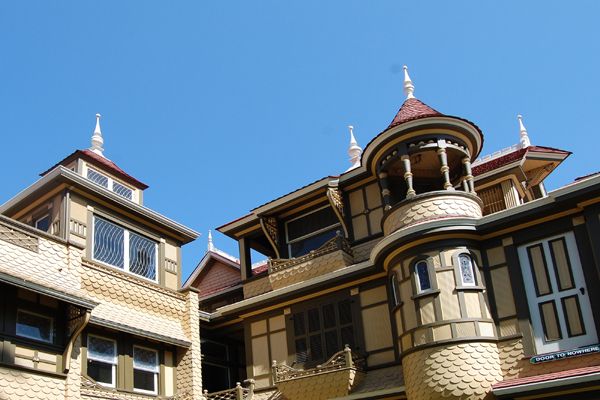 Outside on the grounds, one staff member reported seeing a small woman dressed in black, who was thought to be none other than Sarah Winchester, herself. The front yard also gives visitors a vantage point of a second-story window, where a translucent bushy-haired female spirit has been spotted.

Tour guides allegedly try their best to avoid the third-floor corridors at night because the sounds of footsteps and voices are often heard.

Named one of the “Most Haunted Places in the World” by Time magazine, San Jose’s Winchester Mystery House has been the site of many a spectral sighting, drawing international paranormal investigators and psychics. 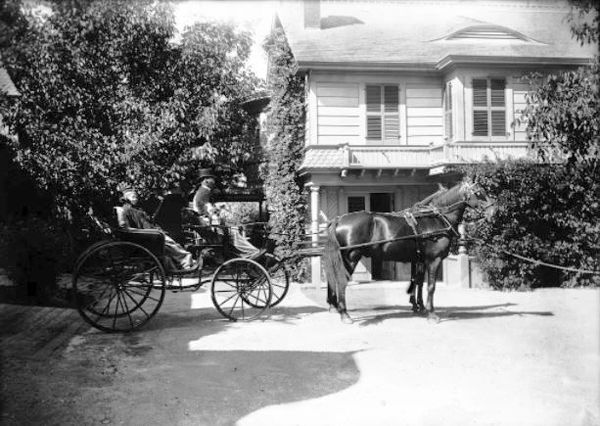