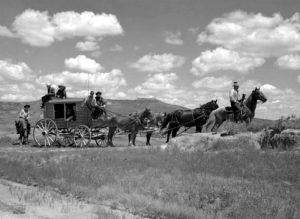 Buffalo Gap, South Dakota is a semi-ghost town in Custer County just outside the eastern edge of the Black Hills. This small community got its start as a stage stop along the Sidney-Deadwood Trail for the Northwestern Stage Company during the 1875-76 Black Hills gold rush. The stage stop took its name from a gap to the west of town that once sheltered buffalo herds.

Due to its location at the junction of several trails, Buffalo Gap became an important way station and supply depot. As a result, George Boland, the station manager and distributing postmaster for all mail coming into the Black Hills, built a roadhouse that provided food and overnight accommodations for passengers and freighters. 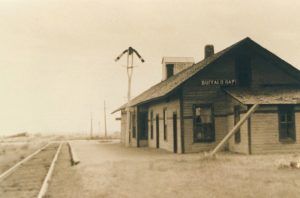 Although the gold rush was beginning to calm down by 1880, the Black Hills had been opened to settlement in 1876 and more people came to the area. In 1885, the Fremont, Elkhorn, and Missouri Valley Railroad pushed through the region spelling the end for the stage lines. A railroad station was built along Beaver Creek and the town of Buffalo Gap was officially platted the same year and would continue in the role of a way station for travelers and as a connecting point to the wagon roads to the Black Hills and Hot Springs. The railroad eliminated the time consuming, long-distance cattle drives of earlier years. 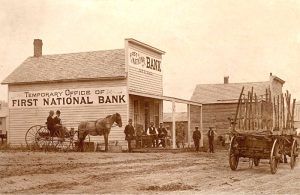 As more and more big cattle ranches filled the Black Hills and the Cheyenne River ranges, Buffalo Gap boomed as it became one of the busiest cattle shipping points in the nation. Before long, the town was called home to about 1,200 people and boasted some 140 businesses. These included 17 hotels and restaurants, four general stores, a hardware store, clothing store, two drug stores, a furniture store, a bank, four Chinese laundries, and 23 saloons.

During this time, the town was also frequented by transients, rowdy cowboys, and outlaws. Some of the town’s businessmen, who didn’t believe that the local sheriff was enough to tame the town, met together and decided that a town marshall needed to be hired. They approached Arch Wilder Riordan, a former cattle drover who had settled at Buffalo Gap and opened a combination drugstore and saloon. A tall man, standing six feet tall and weighing some 240 pounds, he had an easy manner and was well respected. Riordan accepted the job which paid $75 per month. He was obviously effective because soon, the seedier elements of the town hired a gunfighter named Charlie Fugit from Wyoming to take care of their problem. Their plan was to start a fight in one of the saloons and when the town marshal showed up, Charlie would kill him. However, when Riordan appeared, the gunfighter was lethally surprised to find out that the marshall was a faster and deadlier shot than he was. Charlie did not survive the shooting. Arch went on to survive several dangerous situations, never using his firearm without due provocation. In later years, he was appointed a U.S. Marshal. 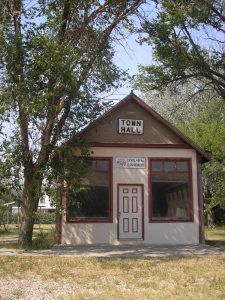 However, things would begin to slow down by 1885 as beef prices fell and the open range was overgrazed. A hot summer and drought in 1886 also proved difficult as brush fires burned much of the rangeland and water sources dried up. But, it was the extremely harsh winter of 1886-87 that spelled disaster for the area ranches. Blizzards roared across the West and temperatures dropped to 30 degrees below zero in some places. The big “die-out” that winter reduced the northern cattle herds by as much as 75%. Afterward, most of the big cattle outfits abandoned the area and cattle raising became a localized industry. Homesteaders then took over much of the land and began to farm, but more drought years followed and many of them also moved on.

By the early 1890s, Buffalo Gap’s population had dropped and its streets were much quieter. In 1895, a fire destroyed much of the central business district and most of the buildings and businesses were not re-established. By 1910, the town’s population had dropped to just 280. As the drought continued for several years, more farmers moved out and ranchers once again moved in. 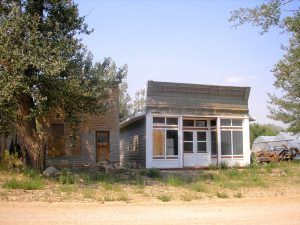 During this time, the town auditorium, fairgrounds, community building, and fraternal lodge halls continued to be used for a wide range of community activities from fairs to dances to traveling shows.

The auditorium was built to house agricultural exhibits for the Buffalo Gap Fair, which was one of the biggest events in the area for years. This annual event, which included a rodeo and stock show, as well as crop exhibits, brought area farmers and ranchers together, as well as many tourists who came to see the Lakota Indians that participated. The Lakota from the Pine Ridge Reservation entered various rodeo contests and camped at the edge of town during the event. Many of them were well-known and highly respected bronc riders, but one of the most popular events was the “Tepee-Setting Race,” which involved two women driving a wagon around the track and erecting their tipis in front of the grandstand. The winners took away a prize of five dollars. 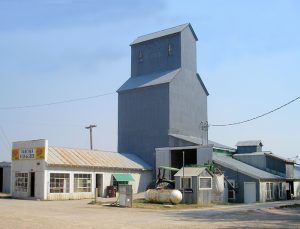 In 1923, a high school was built and in 1926, the Nolan grain elevator was built in response to a shift toward grain farming. The local horse-breeding industry was growing and the town continued to serve as cattle depot.

However, as automobiles were introduced and machinery replaced people on farms and ranches, Buffalo Gap continued to dwindle. The construction of a state highway through Hot Springs and Custer State Park diverted traffic away from Buffalo Gap. The Great Depression and the Dust Bowl of the 1930s further reduced the number of people living in the area.

In 1938, the railroad discontinued its spur line to Hot Springs and stopped shipping cattle from Buffalo Gap about 1953. 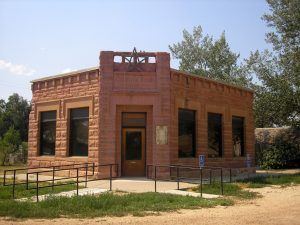 By 1960 most of the town’s businesses were closed for good. The old Citizens Bank building was used as a branch of the First Western Bank for years, but it too, finally closed. The town’s main business today is the grain elevator and feed store. The church also continued to hold services and the post office is still open.

The Buffalo Gap Historic Commercial District was listed on the National Register of Historic Places in 1995, which includes 25 contributing buildings. Today, Buffalo Gap is called home to about 125 people.

The town is located on State Highway 79 between Hermosa and Hot Springs. The highway intersects with County Road 656, an “off the beaten path” that travelers can take into the Buffalo Gap National Grasslands, Badlands National Park, and the Pine Ridge Indian Reservation. 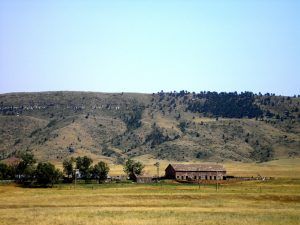 Ranch & scenery west of Buffalo Gap on the way to Hot Springs. Buffalo Gap is on the other side of the mountain, by Kathy Weiser-Alexander.