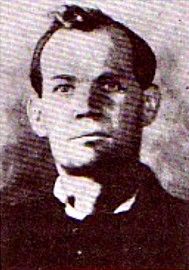 “Bronco Bill” Walters might have started out his life as a cowboy and a railroader, but he soon found a more lucrative future as a train and stagecoach robber.

William E. Walters, aka: Bill Anderson, Billy Brown, Bronco Billy was born at Fort Sill, Indian Territory (Oklahoma) in 1869. When he grew up, he first worked as a cowboy and later as a section hand on the Santa Fe Railroad. However, as he neared his thirties, he turned gunman and bandit in Arizona, at one point joining the Black Jack Ketchum Gang.

Afterward, he formed his own group of bandits, working primarily in New Mexico and Arizona, and was credited with shooting several men and committing a number of stagecoach robberies. Before long, the Wells Fargo Company had had enough and sent for two no-nonsense lawmen by the names of Jeff Milton and George Scarborough to go after Broncho Bill and his gang.

Walter’s luck was about to run out when he and his gang attempted to rob a train at Grants Station, New Mexico. At that time, lawmen drove them off with heavy gunfire and Walters was soon tracked down by a posse led by Jeff Milton. Catching up with two members of the gang, near their hideout outside of Solomonville, Arizona, a gunfight ensued, during which one gang member was killed and Bronco Bill was wounded.

Walters lived to stand trial, was convicted of train robbery and sentenced to prison for life. However, he was released in 1917 and moved to Hachita, New Mexico, where he worked as a wrangler for the Diamond A Cattle Company. He was killed when he fell from a windmill tower he was repairing on June 16, 1921.

Though one would think that he would have returned to any buried treasure site, there is no evidence that he did and the Wells Fargo loot was never recovered. Legend has it that areas outside of Solomonville, Arizona may yet hold the stolen cache.