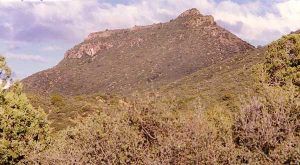 The Battle of Turret Peak in south-central Arizona was one of the pivotal fights that broke the Apache and Yavapai’s backs in their efforts to resist white encroachment into their lands. After the two tribes had made several raids, George Crook was assigned to the Southwest to help quell skirmishes between settlers and the tribes in June 1871. In 1873, Crook was tasked with tracking down members of the tribes and force the Apache and Yavapai to submit to reservations.

Over the course of the operation, there were over 20 clashes, including a successful attack in December 1872 on a Yavapai camp during the Battle of Salt River Canyon that ended with 76 dead natives. On March 11, 1873, a band of Tonto Apache attacked and killed three white men. Crook’s men then tracked the attackers to a Yavapai stronghold on Turret Peak in central Arizona.

On March 27, 1873, the battle of Turret Peak formed part of General George Crook’s Tonto Basin campaign  Captain George Randall, leading a small force, which included Apache scouts, surprised a rancheria ensconced near the crest of Turret Peak. The battle at Turret Peak proved to the Indians that there was no sanctuary from the soldiers. Two weeks later, most Apache and Yavapai surrendered to General George Crook at Camp Verde, Arizona.

The site is within the jurisdiction of the National Forest Service.